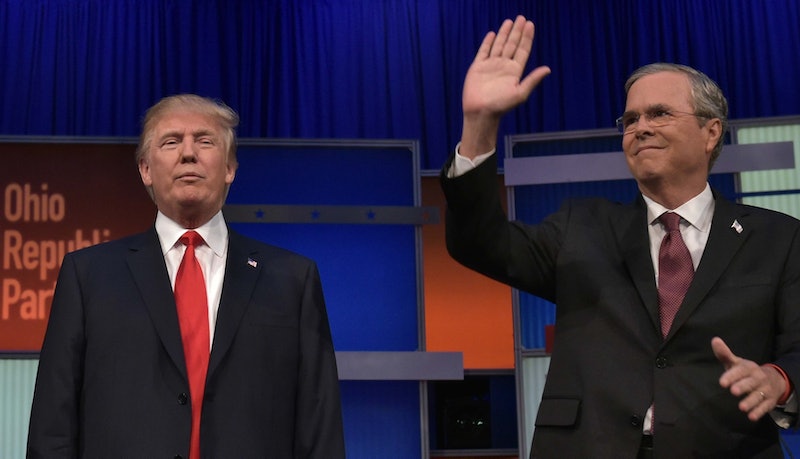 Yet another war of words has broken out between GOP candidates during the 2016 presidential election. After a full weekend of verbally sparring, it appears that Jeb Bush and Donald Trump are still feuding. Trump initiated the fight by criticizing Bush's brother during an interview with Bloomberg TV on Friday. The GOP frontrunner said that former president George W. Bush was essentially to blame for the Sept. 11 attacks. Jeb defended his brother on Twitter later that day, calling Trump "pathetic" and stating that George kept the country safe despite the attack. Hours later, the Donald fired off a series of three tweets calling out Jeb and questioning his candidacy.

Jeb stayed relatively silent on the social media platform until the next day. On Saturday, the former Florida governor issued a series of three tweets with the same video criticizing Trump as a candidate set to a rather whimsical, goofy beat. The nearly two-minute long video specifically zeroes in on the Donald's shaky grasp of foreign policy as well as his political gaffes about the military. Though Trump never served in the armed forces, he has said that he's always felt as if he had. The video is an explicit attack on Jeb's fellow candidate, ending with Trump's name being changed to "stumped."

Mere hours before Jeb was set to appear on CNN's State of the Union, the Donald took to Fox News Sunday to further question George W. Bush's handling of 9/11. He failed to address Jeb's latest web ad but did criticize what Jeb previously had to say about his brother:

Jeb said we were safe with my brother. We were safe. Well, the World Trade Center just fell down! Now, am I trying to blame him? I'm not blaming anybody. But the World Trade Center came down. So when he said, we were safe, that's not safe. We lost 3,000 people, it was one of the greatest — probably the greatest catastrophe ever in this country if you think about it, right? ... I'm not blaming George Bush. But I don't want Jeb Bush to say my brother kept us safe because September 11 was one of the worst days in the history of this country.

It appears that both candidates have shifted their feuding focus. Jeb primarily talked about his web ad against the candidate when asked about Trump during an interview on CNN's State of the Union on Sunday. Host Jake Tapper reiterated his second GOP debate question regarding whether Jeb would be comfortable if Trump had the country's clandestine nuclear codes. The candidate not only doubted the Donald's competency with important nuclear information but his entire candidacy:

It looks as though he's not taking the responsibility, the possibility of being the president of the United States seriously. For him, he's an actor playing a role of a candidate of president; not boning up on the issues, not having a broad sense of the responsibilities of what it is to be a president. ... He's a phenomenal personality for sure and he's capturing people's deep anger and angst about Washington D.C for sure but he's not going to be able to solve these problems.

Almost immediately, Trump tried to bring the feud back to the issue of George W. Bush's presidency. The GOP front-runner even called Jeb's polling numbers into question.

Though Jeb explicitly stated that he doesn't believe that Trump will nab the GOP nomination, poll numbers seem to suggest otherwise. According to RealClearPolitics' recent polling average, Trump continues to lead with over 20 percent of voters polled choosing the candidate as president. Jeb, however, only receives between 8 percent support. No matter how long the feud between the two candidates drags on for, it's still ultimately up to the American people to decide whether either will make a good president.