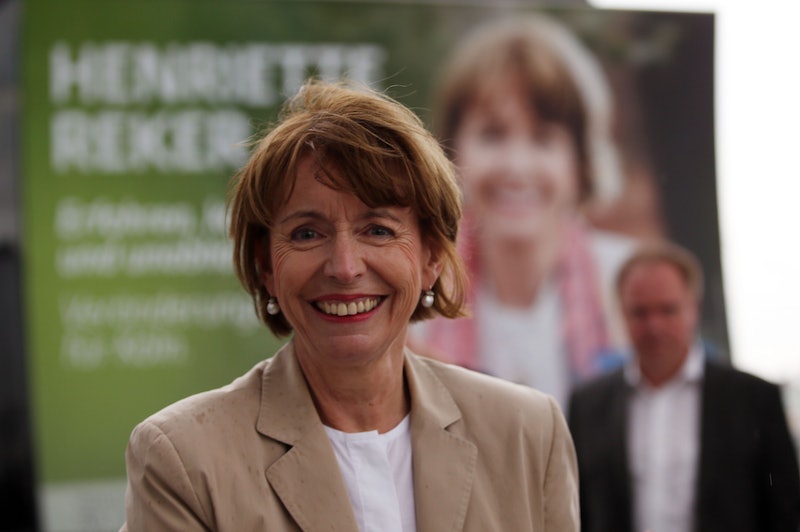 The day before the Cologne, Germany, election, mayoral candidate Henriette Reker was out campaigning when she was stabbed by a xenophobic man who allegedly was upset with her liberal stance on integrating refugees into German society. Reker, who is in the hospital with a serious neck wound, is expected to fully recover. And, well, more than recover — likely to thrive. According to the AFP, Henriette Reker was elected as the Cologne mayor (the first woman to hold the position) on Sunday, and she probably already has some thoughts on what she'll do first.

Reker, the head of the city's social affairs and integration department, has shown widespread support for refugees and has recently made serious steps to welcome asylum seekers in Cologne, including housing them in various locations throughout the city and calling for an even greater level of help. Germany is expected to see around 1 million refugees in the country this year alone, and while much of the country seems to be open to assisting those seeking asylum, others have criticized Reker and other politicians' liberal stance. The 44-year-old male suspect in Reker's stabbing allegedly had ties to far-right and neo-Nazi political groups, CNN reported, including one that had been outlawed in the country.

Reker ran as an independent candidate and was backed by Chancellor Angela Merkel's party, the Christian Democratic Union of Germany (CDU). According to BBC News, a spokesperson for Merkel said she "expressed her shock and condemned this act." Reker was also supported by the Greens and the Free Democrats, and was already seen as having a pretty good chance at winning the election. She beat her main competitor, Jochen Ott, with a preliminary showing of 52 percent of the vote, compared to Ott's 32 percent.

The newly elected mayor of Cologne joins the ranks of several other first female mayors throughout Germany. Helma Orosz was elected as the first female mayor of Dresden in 2008. Angelika Volquartz served as Kiel's first female mayor from 2003 to 2009. Petra Roth was Frankfurt's first directly elected female mayor, and she held the position from 1995 to 2012. But it goes back even further than that. Louise Schroeder was acting mayor of West Berlin — and then just plain mayor — from 1947 to 1951.

When Reker recovers — and it's not clear when she will — she'll join some great company. But her election in and of itself declares to the city, and the country, and the world, that Cologne's citizens doesn't support violence or anti-refugee sentiments. Reker was going to win the election anyway and continue implementing her ideas about how to help refugees. But now she has a devastating reason to fight for it even harder.