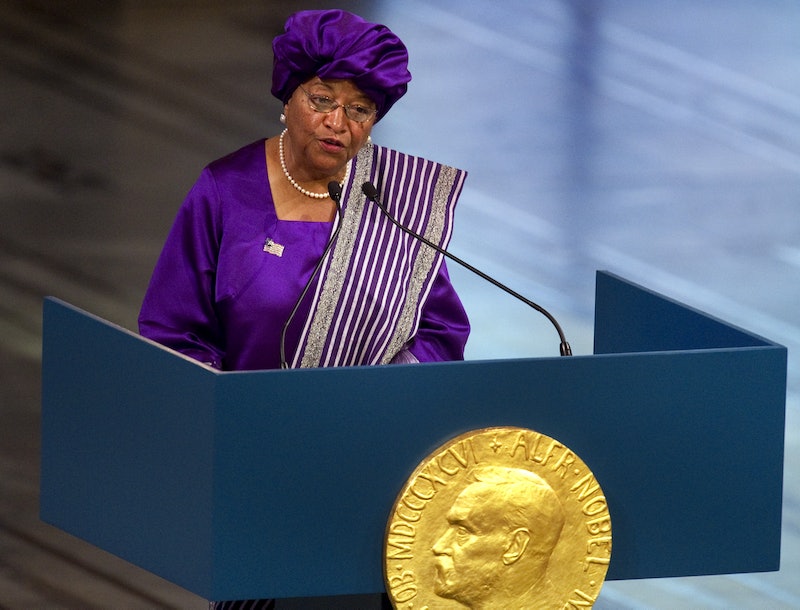 Although it feels to me like the U.S. is a long way from electing a female president, there are dozens of female leaders in charge of their countries all over the world. Historically, female leadership has been sporadic, but always observable, going all the way back to Pharaoh Merneith of Egypt in 2952 B.C.E. The occasional story of a powerful sovereign female leader, like Queen Elizabeth I of England or Empress Catherine The Great of Russia, pops up throughout history, but most female leaders were dowagers, regents for underage male heirs, or quickly overthrown by other parties.

A dramatic decrease in female world leadership came with the renewal of democracy in the 17th century. Women could no longer succeed the seat of government simply because of bloodline, so leadership in patriarchal societies ran unbalanced for centuries. Only in the post World War I revolutionary governments of Europe did women begin to gain traction in government — Nina Bang, who was the Danish Minister of Education from 1924 to 1926, was the first woman to be democratically elected to a minister position.

Sirimavo Bandaranaike of Sri Lanka broke the glass ceiling in 1960 by becoming the first elected female world leader, and since then, women have increased dramatically in democratic leadership up until today. There are currently 27 female leaders in charge of sovereign countries and self-ruled territories — here are 10 of the most influential women in global politics today.

Executive President of Liberia since 2006, Ellen Johnson Sirleaf made history as the first elected female head of state in Africa. She holds an associate's degree in accounting from Madison Business College and a Master of Public Administration degree from Harvard's John F. Kennedy School of Government. In office, she created Liberia's first universal elementary school system, nearly eliminated the national debt and won a Nobel Peace Prize. On top of all that amazingness, Sirleaf is the aunt of Retta, who plays "Donna" on Parks and Recreation.

Bachelet started her career as a pediatrician before transitioning into the political sphere as Chile's Minister of Health in 2000. Her first term as Chile's first female president, from 2006 to 2010, was a huge political success — she passed pay equality legislation to eliminate discrimination between men and women in the private sector, mandated sex education in high schools and expanded the country's services for the poor and underprivileged. You go girl.

Rousseff took a long, hard road to become Brazil's first female president. At 23, she was jailed and tortured for two years for protesting against the military government that controlled the country at the time. Since then, she has not stopped fighting to make her country stronger. Since being elected to the presidency in 2010, Rousseff has appointed a record number of women to her cabinet, reduced consumer taxes on the middle and lower classes, and reformed the Central Bank of Brazil.

Grabar-Kitarović is the newest addition to the Female Presidents Club — she was just elected as Croatia's first female president in January. Croatia is currently caught in the middle of the Syrian migration crisis, and has seen more than 30,000 people cross into the country in the last month. On top of the immigration crisis, Croatia's parliamentary elections are set for Dec. 8, so Grabar-Kitarović will have her hands full. But with nearly 25 years of public service experience under her belt, she should be up to the challenge.

Park is the first female president of South Korea, but she isn't exactly new to the demands of the presidency — her father served in the same office from 1961 to 1979. She took up the mantle in 2013 and has since committed to reducing violence in society, done major restructuring to the South Korean bureaucracy and improved trade relationship with major trade partner Australia. Arguably, her biggest accomplishment is her slow but steady improvement of relations with North Korea, and her progress so far will hopefully continue.

Swiss President Sommaruga is also new to her office, having been sworn in on Jan. 1 with 86 percent of the parliamentary vote. She is currently facing the challenge of enacting federal referendums that Swiss voters have approved, like banning pedophiles from working with children for life and a change to Switzerland's extradition policy. But this social Democrat has a history of creative problem solving and should be ready to meet the challenges ahead.

This name should be familiar to you — Germany's status as a global leader means Merkel frequently ends up in the headlines. During her tenure as Germany's first female chancellor, she carried her country deftly through the economic crisis, renewed Germany's commitment to clean energy sources, and raised the national minimum wage to €8.50 per hour (about $9.44). Her popularity is unmatched in the country's history and has established her as one of the most important women in the world.

Simpson-Miller was elected as the first female prime minister of Jamaica in 2006, after serving 30 years in public office. She has endorsed LGBT+ rights, worked to make healthcare for children free and has plans to officially replace the traditional monarchy with an elected president. On top of being a groundbreaking prime minister, she has an awesome nickname — Mama P.

Diagnosed with dyslexia in high school, Erna Solberg overcame her learning disability to become the second female Prime Minister of Norway in 2006. Her time in office has been relatively quiet, but she's streamlined the country's immigration policy and recently pledged $100 million to support girls' education worldwide. Her approval rating has grown during her time in office — the people of Norway like what Solberg is doing.

Powerful women in charge make for a big difference in global politics — there's a lot to be gained from having the female perspective in high-level politics. Sexism is the only thing that is stopping women from being leaders all over the world, and it's high time women everywhere get their chance to be in charge, just like these female leaders.

More like this
Sandra Bullock, Girlboss Extraordinaire
By Matt Harkins & Viviana Olen
President Zelensky Spoke Out On Ukraine's Chances Of Hosting Eurovision Next Year
By Sam Ramsden
10 Times Diana & Meghan Spoke Similarly On The Royal Family
By Sophie McEvoy
How The City Healed Five Years On From The Manchester Arena Attack
By Ella Glover
Get Even More From Bustle — Sign Up For The Newsletter