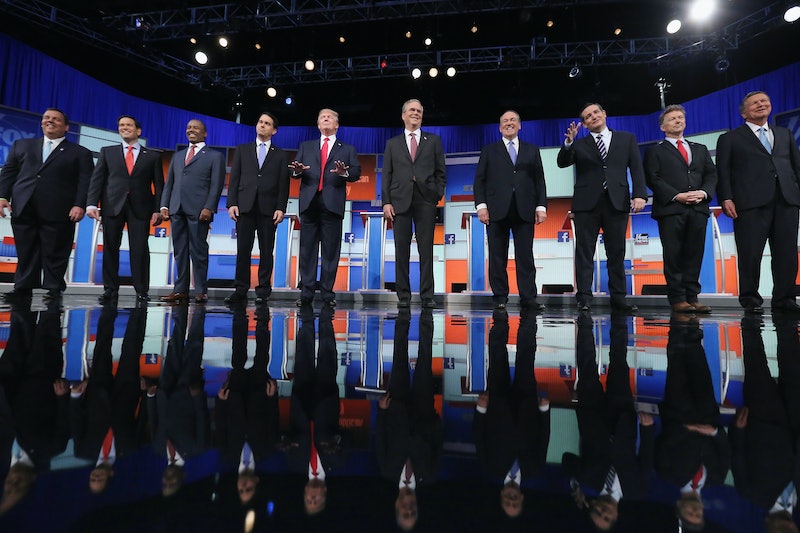 As the media continues to digest last week’s Democratic debate, the Republican candidates are already preparing for their third opportunity to one-up each other in front of a live audience. There’s been a little bit of drama this time around: CNBC, which is hosting the debate, proposed a set of rules that rankled several of the candidates, most notably Donald Trump and Ben Carson. One issue of contention was the running time: How long will the third GOP debate be? For a brief moment, there was no consensus.

But that’s since been resolved. The third Republican presidential debate, which airs live on Oct. 28, will be two hours long, including commercials. That last bit is important, because CNBC originally proposed that the debate itself be two hours long, with an additional 15 minutes or so of commercials tacked on. Trump and Carson were outraged at this, and co-authored a letter threatening to pull out of the forum entirely unless CNBC changed the rules to their liking.

It wasn’t just the running time; the two GOP frontrunners also opposed CNBC’s decision to ban candidates from giving opening or closing statements. Fellow candidate Rand Paul agreed, with an aide saying that the network can “go fuck themselves” if the candidates aren’t allowed to deliver opening and closing statements, according to a CNN report.

Trump and Carson’s gambit worked: A day after they sent the letter, CNBC announced that the debate time would be kept to two hours including commercials, and that, yes, The Donald and company will be allowed to give opening and closing statements.

It may seem odd for candidates to hold a debate hostage over the format. Debates, after all, are supposed to be a chance contenders to introduce themselves to voters, so you’d think the candidates would be eager to hop on stage no matter what the rules.

But Trump and Carson did have a point, at least with regard to the length. The last GOP debate, despite drawing almost 23 million viewers, was widely criticized for its tortuous three-hour running time. That tested both the patience of viewers and, we can only assume, the bladders of the candidates themselves. Add the fact that the auditorium itself was oppressively hot — several of the candidates could be seen sweating on stage — and it makes perfect sense that they’d want to get out of there sooner rather than later.

In response to the dust-up, Jeb Bush said on CNN that he “could do four [hours of debate] if forced to.” Considering his sorry standing in national polls, it makes sense that he'd want all the airtime he can get.

More like this
Michigan’s Governor Is “Going To Fight Like Hell” To Protect Abortion Access
By Andrea Zelinski
How To Fight For Reproductive Rights, Based On How Much Time You Have
By Courtney Young
Britney Spears Thanks Fans After Miscarriage & Explains Why She's Writing A Book
By Jake Viswanath
Yes, Billboard Queen Angelyne Really Ran For Governor Of California
By Brad Witter
Get Even More From Bustle — Sign Up For The Newsletter