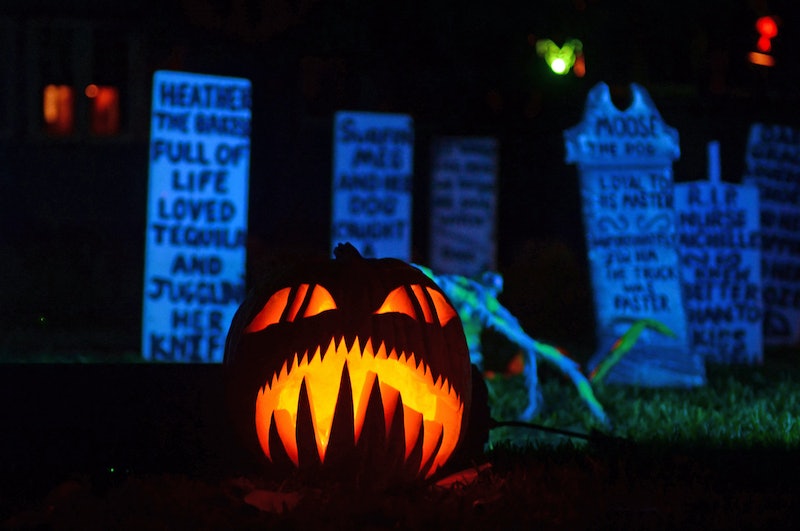 Halloween is quite possibly the only night of the year during which being terrified is supposed to be good fun. And while this cultural tradition has no doubt resulted in plenty of fun haunted houses and happy memories, Halloween has also produced some terrifying crimes that could easily make expired candy the least of your worries this year. On any night of the year, unexplained disappearances, sexual assault, and murder are all frankly horrifying. But when crimes, especially those that remain mysteries years later, take place specifically on Halloween, they're exponentially creepier, as we imagine the complex plotting and intrigue that must have taken place leading up to them.

As much fun as Halloween can be, the holiday (what with all of its costumes and decorations) ultimately make it easy for people to hide their identities or diffuse through crowds and darkness to commit a wide range of crimes. Likewise, law enforcement no doubt struggles with discerning pranks from serious criminal activity on the evening of Oct. 31. And individuals expecting an innocent prank could serve as easy victims for serious criminal activity, too. Here are some chilling accounts of Halloweens gone wrong.

1. The Disappearance Of Steven Damman

In 1955, in East Meadow, New York, a woman named Marilyn Damman took her two-year-old son Steven and seven-month-old daughter Pamela to a supermarket. She left both of them outside of the store, her daughter in a carriage. Minutes later, Damman returned and found them both gone. The carriage, with her daughter inside it, was found a block away, but Steven was never seen again. At some point, investigators suspected an unidentified child found in a cardboard box might be Steven, but DNA testing went on to disprove this.

Decades later, in 2009, a Michigan man came forward believing himself to be Steven. DNA testing disproved this, too. Some have theorized that Steven was abducted and raised by his abductor, as no dead body was ever found. This is sometimes the case when infants are kidnapped. However, Steven's disappearance ultimately remains a mystery to this day.

In 2009, three teen girls were abducted by Aaron Thomas while trick-or-treating in Woodbridge, Virginia. Thomas proceeded to rape two of the girls before the third managed to contact her mother on her cell phone. Thomas quickly fled, but he was eventually found and arrested two years later, in 2011. Thomas was charged with raping 20 women, earning him infamy as "the East Coast Rapist." He was sentenced to three life sentences in 2013.

In 1974, Ronald O'Bryan killed his own son, eight-year-old Timothy, by giving him candy laced with cyanide. The poisoning is believed to have been part of a life insurance scheme. After his wife testified against him, Ronald was imprisoned, and later sentenced to death by lethal injection in 1984. Ronald's actions sparked generations of widespread paranoia among parents about the threat of their children being issued poisoned candy.

In 1964, Helen Pfiel, a housewife from Long Island, jokingly distributed candy bags with dog biscuits, steel wool, and ant traps containing arsenic to trick-or-treaters. Parents weren't humored by the prank, and police later arrested the Pfiel, who was sentenced to psychiatric evaluation and charged with child endangerment.

5. The Disappearance Of Cindy Song

In 2001, Hyun Jong “Cindy” Song, a 21-year-old student at Pennsylvania State University, went to a Halloween party at a nightclub and was dropped off at her apartment at 4 a.m. After Song was later reported missing, authorities searched her apartment. Although there were no signs of any struggle, parts of her costume remained, indicating that she had gone inside her apartment. A witness later alleged that a woman who looked like her was riding in a vehicle with an unidentified male, screaming for help.

Later, in 2003, a man named Hugo Marcus Selenski was arrested after the remains of five people were found buried in his backyard. Song's remains were not among these, but the police were informed that Selenski and an accomplice, Michael Jason Kerkowski Jr., had kidnapped Song. Kerkowski's remains were found in Selenski's backyard, but no concrete evidence links Selenski to Song’s disappearance. About a decade later, in January 2014, the burned remains of a dozen more people were found buried on Selenski's property. Song's remains have yet to be identified among these.

6. The Murder In Martin, Ohio

In 2010, Devon Griffin returned from church to his Martin, Ohio home in broad daylight and found the murdered corpses of his mother Susan, her new husband William Liske, and his brother Derek, all dead from apparent head injuries. In his phone call, Griffin described the scene as like “something out of a haunted house.”

The killer was later identified as William Liske Jr., Liske’s son from an earlier marriage. Liske Jr. was schizophrenic and had a history of violent behavior. He pleaded guilty to the three murders.

7. The "Thelma And Louise" Killers

In 1957 Los Angeles, Peter Robert Fabiano opened his door for trick-or-treaters, only to be shot dead by an adult in costume. Eventually, it was discovered that the killer had been a woman named Goldyne, who was allegedly in love with the man’s wife, Joan. Prior to Halloween night, the two women had plotted to be together by killing the husband.

In 1998, Karl Jackson was driving through the Bronx with his girlfriend when teenagers repeatedly struck the vehicle with eggs. Jackson stepped out of the vehicle to confront the teenagers, who proceeded to argue with him until he returned to his car. However, one of the teenagers then took out a gun and opened fire, killing Jackson instantly. The shooter, Curtis Sterling, was sentenced to 20 years in prison.

9. The Killing That Changed Curfew

In Fond du Lac, Wisconsin in 1973, nine-year-old Lisa French went trick-or-treating and was kidnapped, raped, and eventually killed by her neighbor, Gerald Turner, who would confess to his crimes nine months later. French's naked body was recovered days after Halloween in a plastic bag in a farm field. More than four decades later, Fond du Lac still only allows trick-or-treating on the Sunday before Halloween, from 3:30 to 5:30 p.m.