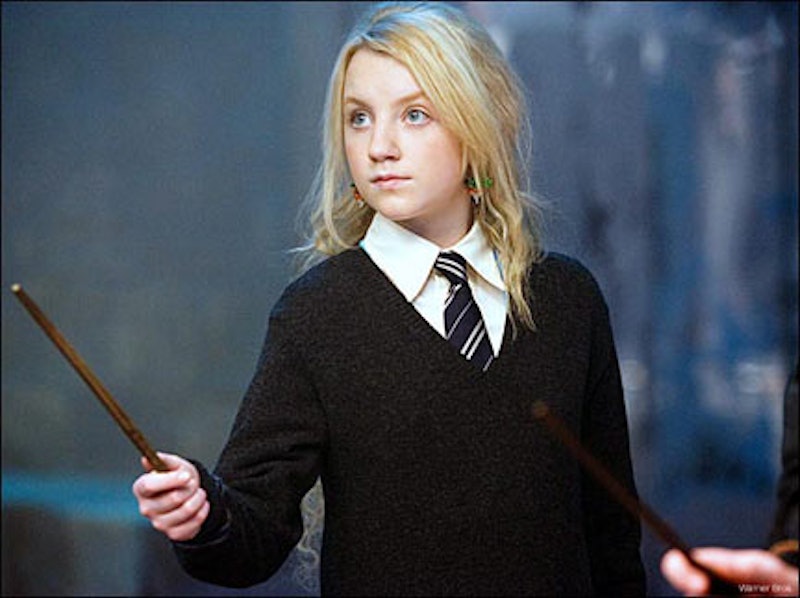 When you think of all of the amazing characters the Harry Potter series gave us, it's really kind of overwhelming. You had Harry, who was the fearless leader: the Chosen One, if you will. Ron was the funny, loyal best friend we all wished we could have. Hermione, of course, was the one all book worms looked up to, and wished to be more like. Even when it comes to bravery, it's Neville we think of.

All things considered, Luna Lovegood is a severely underrated character. She was just as loyal to Harry as any of the other, more prominent characters, she was fiercely brave, and she was never afraid to be anything but herself. In fact, Evana Lynch was so inspired by her that she wrote to J.K. Rowling herself and explained her love and connection to Luna. The power of Luna Lovegood's personality ended up helping her overcome an eating disorder, and obtain the role of Luna in the film.

You've gotta hand it to her, the girl was pretty inspiring, for one of the more underrated characters in the series. She could teach us all a thing or two about confidence, that's for sure. Here are 7 of the biggest life lesson we can learn from Luna.

Luna definitely stood out at Hogwarts, with her quirky glasses, full-on lion costumes, and her general lack of regard for what anyone else was wearing or thought of her. That's a way of thinking we could all use every time we're shopping and find ourselves thinking "I might look weird in this, though." You won't! Luna approves.

She's often overshadowed by, well, everyone, but Luna was extremely brave throughout the series. She was one of the first to sign up for Dumbledore's Army, she put her all into everything she did, and she never stopped fighting. Neville gets most of the credit (understandably, I mean, he did kill Nagini) but Luna was right there too, from start to finish!

A Sense of Humor Will Go a Long Way

For someone who has seen as many terrible things as Luna has, she always found something to laugh at. From Ron's commentary to Neville's antics, Luna could lighten even the darkest of moods with her laughter.

Be There For Your Friends, No Matter What

Luna was loyal every step of the way, even when she knew people laughed at her behind her back. Once Luna was your friend, she stuck by you. Just look at how she stood by Harry, no matter what. When they first saw the thestrals, and everyone immediately thought Harry was out of his mind, Luna was the first one to reassure him that he wasn't crazy. From Thestrals to the D.A. to the Battle for Hogwarts, Luna was right there. That's a pretty amazing way to be.

Being Different is a Good Thing

They might have called her "Loony Lovegood," but Luna never let that phase her. She stood out from the crowd for a million different reasons, but none of them were bad reasons. Just different. Luna gave new meaning to "marching to the beat of her own drum," and in doing so taught tons of awkward young girls that it was OK to be that way. After all, it's not like she was, say, leaving pieces of her soul in inanimate objects or something. THAT kind of different is a bad thing.

When in Doubt, Blame the Wrackspurts

They float around and make your brain go all fuzzy. And if you can't find something, it's probably just the nargles. Don't say she didn't warn you!

Everything great about Luna was hidden under the surface (and, yes, those giant glasses, too). She may have looked crazy, but she was so much more than that. In an interview, Evana Lynch said that was what drew her to Luna: she wanted to be more like her. She wanted to free the side of her that "Really doesn't give a damn." Because Luna didn't, and that was maybe the best lesson of all.