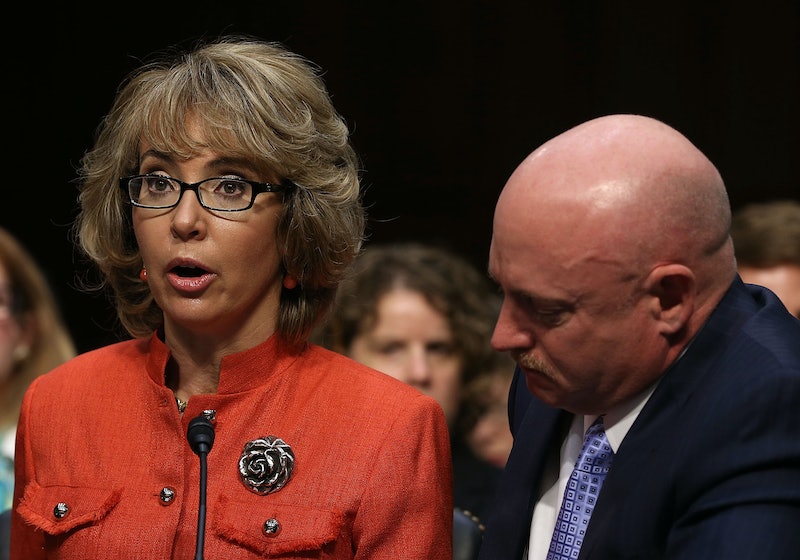 That's the motto for the Rights and Responsibilities Tour former Congresswoman Gabby Giffords and husband Captain Mark Kelly kicked off Monday in Las Vegas. The goal of the tour is to remind elected officials that there is broad public support for sensible measures to reduce gun violence, like expanded background checks.

New polling by Giffords and Kelly's political action committee Americans for Responsible Solutions has found that expanded background checks are popular with significant majorities, even in states with high percentages of gun owners. In Nevada, where the tour begins, 84 percent of voters support expanded checks.

Giffords and Kelly founded Americans for Responsible Solutions in response to federal government inaction on gun violence. Shooter Jared Lee Loughner shot Giffords in the head, killed six of her constituents, and injured 12 others during a constituent meeting on January 8, 2011.

"Since that tragedy in Tucson, America has seen too many more mass shootings – but no response from Congress," the Americans for Responsible Solutions website explains, "This inaction on gun violence was thrown into even starker contrast after the massacre of 20 children and six of their teachers at Sandy Hook Elementary School."

In Las Vegas, Giffords and Kelly will visit a local gun range, meet with law enforcement, attend a roundtable discussion with local business leaders, and meet with local supporters. After that, they'll travel to Alaska, North Dakota, Ohio, New Hampshire, Maine, and North Carolina for a series of similar initiatives.

Interested in keeping track of the tour's events? We certainly are. Search #RandRtour on Twitter this week for updates.

More like this
Prince William Condemns “Unacceptable” Comments Made To A Black Guest At Buckingham Palace
By Shahed Ezaydi
The David Beckham Qatar Controversy, Explained
By Sophie McEvoy
Iran Has Issued A Death Sentence Over Mahsa Amini Protests
By Catharina Cheung, Darshita Goyal and Maxine Harrison
What To Know About Martin Bashir After Watching 'The Crown'
By Bustle UK
Get Even More From Bustle — Sign Up For The Newsletter