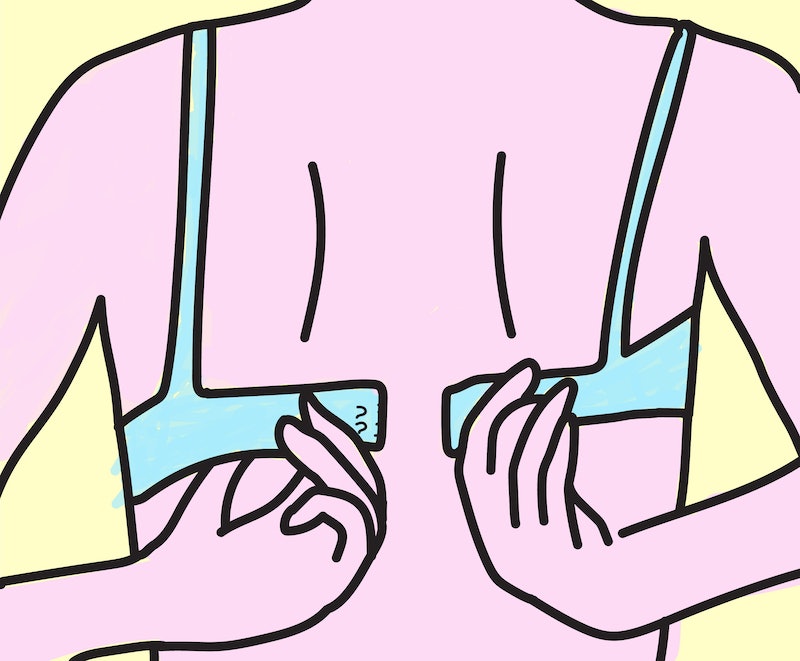 Honestly, there are few worse things I can think of when it comes to getting ready to go out than a poor-fitting bra. If your bra struggle is real, you are likely all too familiar with these common bra mistakes you're making. The good news? I know how to fix them. Luckily, there's hope out there so you don't have to suffer through something that just doesn't fit! Don't your tatas deserve better?

While I am all in favor of the #FreeTheNipple movement, I personally prefer supporting my little boobies. I finally got up the courage to get a proper fitting at Victoria's Secret a few years ago and it totally changed my shopping life. So before I even dive into this list, go get fitted somewhere!

As for the ideal bra fit, Bustle writer and "boob whisperer" Jodie Layne has the deets. She explained, "The middle of the bra, where the underwire meets, should be flush against your sternum. You want to make sure to adjust the shoulder straps so that you can snugly fit two fingers between your shoulder and the strap. The back band should be parallel to the ground and graze the bottom of your shoulder blades, while also being able to fit two fingers underneath." Et voila, ladies.

Now that we've got the "right" fit on lockdown, time to dive into the bra mistakes you're making!

1. You're Not Tossing An Old Bra

I am so guilty of this. Bobbie Smith of Freshpair told Huffington Post, "When worn correctly and taken care of correctly, a bra's lifespan is about eight months." NOOOO. She suggests rotating out six or seven bras at a time to help them all last longer.

2. You're Wearing The Right Outfit With The Wrong Bra

Smith explained another common issue is actually having the right bra, but not for whatever you're trying to wear. If you need to go get fitted for a new strapless bra or something with a less traditional back to pull off the dress you just bought, do it!

3. You're Opting For The Tightest Hook

One more piece of Smith's advice that really stuck out to me was not to hook your bra on the first, tightest hook. She recommends buying a bra that fits well on the loosest hooks so that, as it stretches, you can continue to make it fit. So wise.

4. The Band Is Higher Than The Underwire

If your back band is sitting higher up on your back than your underwire is on your chest, HerBeautyCo advises trying on a smaller band size. Ideally, the band should sit no higher than the underwire and rest horizontally across your back.

5. You're Wearing The Wrong Cup Size

As highlighted in Seventeen, you should have absolutely zero spill-over from your cup and be 100 percent supported. If not, time to size up your cup (but not necessarily your band!).

6. Your Underwire Is Raised

Similar to spilling over, another sign you need to consider upping your cup size according to the Telegraph is if your underwire is not sitting smoothly against your skin and along your natural breast crease.

7. You Assume You Need A Push-Up

If you're smaller-chested like me, don't let media pressures make you think you always have to wear a push-up. WhoWhatWear suggests trying an unlined cup, and I couldn't recommend it more! In fact, I feel even sexier celebrating my natural shape.