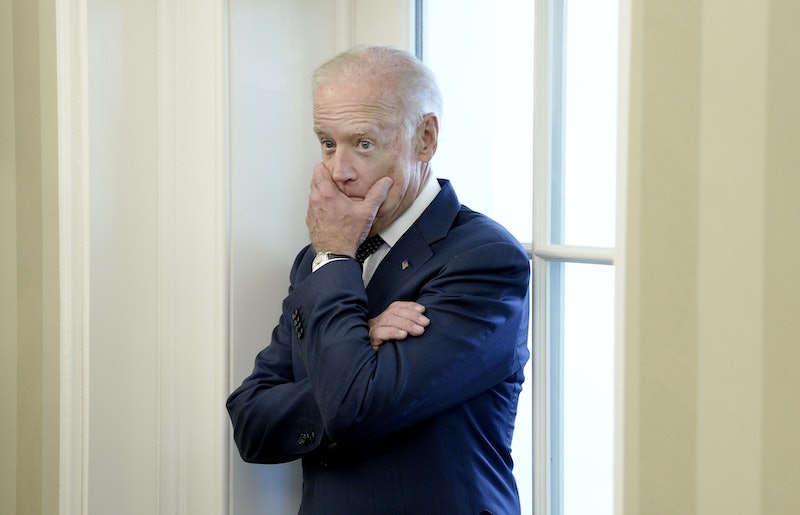 Monday, Fox News reported what we've all been waiting for. Vice President Joe Biden will run for president in 2016 — at least, according to their sources. Fox News White House correspondent Ed Henry cited three anonymous sources for the impending announcement, while other news outlets also reported that Biden will likely announce an official bid in the next two days. Though these reports are still mere speculation at this point, they have often accurately predicted campaign announcements in the past. There's no reason America shouldn't expect the same with the Biden news.

According to an NBC News report, Biden called International Association of Fire Fighters President Harold Schaitberger last Friday to discuss his presidential run. A source close to the situation told NBC that during the conversation, the two outlined the logistics of a campaign, from fundraising to strategy. Given that the IAFF is one of the most powerful labor unions in the country, such a call would certainly be strong indication of Biden's intentions to run. On Monday, MSNBC doubled down on the speculation, and predicted that Biden would announce in 48 hours. It's just the latest announcement time frame after a very long game of "will he or won't he?"

Biden has been teasing a presidential run for years now, dropping hints as early as January 2013, but over the past year, he's been increasingly fueling the rumors with pointed answers during interviews and loaded visits to caucus and primary states. By spring, whispers of a Biden campaign had heightened into buzz.

However, since May, when Biden's son Beau sadly died after battling brain cancer, any momentum toward a potential campaign seemed to come to a halt, and an announcement was no longer such a sure thing. Biden was clearly hit hard by Beau's death, but when talking about his beloved son, he continued to remain vague about his plans. He recounted how Beau's dying wish was for his father to run for president, sparking hope in his supporters — not to mention moving an entire nation.

However, when he appeared on The Late Show with Stephen Colbert, Biden seemed to suggest that because of the recent tragedy, his heart was not in the right place for something as all-consuming as a presidential run.

Now, less than a week after the first Democratic debate and as current frontrunner Hillary Clinton prepares to testify in front of a House committee on the Benghazi attacks later this week, Biden could finally make his official jump into the race. After missing several predicted announcement deadlines, the timing might finally make sense.

More like this
President Zelensky Spoke Out On Ukraine's Chances Of Hosting Eurovision Next Year
By Sam Ramsden
How To Fight For Reproductive Rights, Based On How Much Time You Have
By Courtney Young
Celebrities & President Biden Are Enraged By The Leaked Roe v. Wade Decision
By Alyssa Lapid
The Music Industry Continues To Fail Black Women
By Precious Adesina
Get Even More From Bustle — Sign Up For The Newsletter