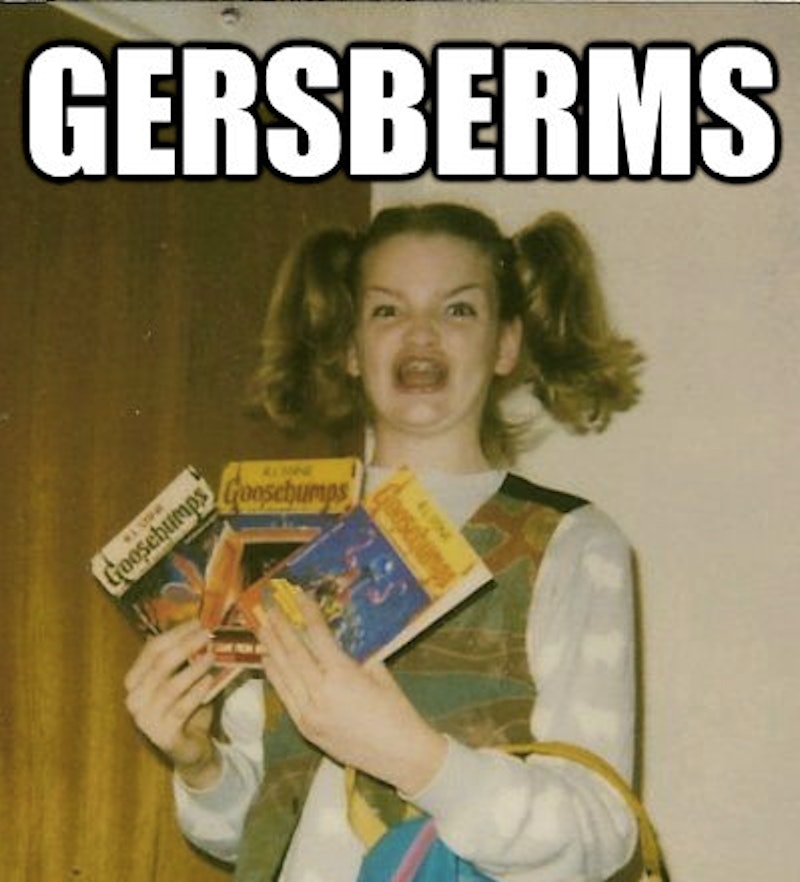 In today's viral news, the tween Goosebumps model featured in the "Ermahgerd Gersberms" meme has been identified. Yes, that's right, the Ermahgerd meme girl has come forward to stake her claim on that R.L. Stine loving, retainer-wearing, magician vest-wielding young thing in the photo.

What started out as a private joke between friends has now grown into an international joke amongst the entire world web. In elementary school Maggie Goldenberger posed for a Polaroid in her finest, funniest dork costume she could muster. For years, the photo lived behind a magnet on her friend's fridge. When it was posted on Facebook, years later, it became more than an inside joke between friends. The photo made its way to Reddit, eventually under going a meme-make over and finally becoming a viral sensation.

But Maggie Goldenberger had nothing to do with it. She didn't even know the meme existed until it had already become an internet sensation, a full 12 years after the original picture had been snapped. Vanity Fair had a candid conversation with Goldenberger regarding the absurd yet fascinating concept of being meme-famous. Goldenberger, now 26, works as a nurse in Phoenix. For her, the photo was taken as a joke, and the fact that there best of the world is in on it now doesn't really bother her. If anything, she just thinks it's bizarre.

“It was a middle schooler’s perspective of what funny is, so I’m always surprised when adults are such fans," she said to Vanity Fair. "It’s essentially making fun of a nerdy girl for being excited about books ... So what? I'm always baffled that it still comes up three years later.”

But for others, having a somewhat private photo of themselves being turned into a meme was an extremely intrusive, offensive and hurtful experience.

Recently Ashley VanPevenage had a before and after make-up photo go viral. The internet met her with negativity, heavy trolling and abusive language. For Ashley, finding her photo under that block white lettering was a deeply unsettling experience, and last week she bravely came forward to share her side of the story — proving again what's all fun and games for the internet is not always the same for the person on the other end of the screen. In an age when identities are constantly being sold for entertainment and data, has the internet taken away our right to be human?