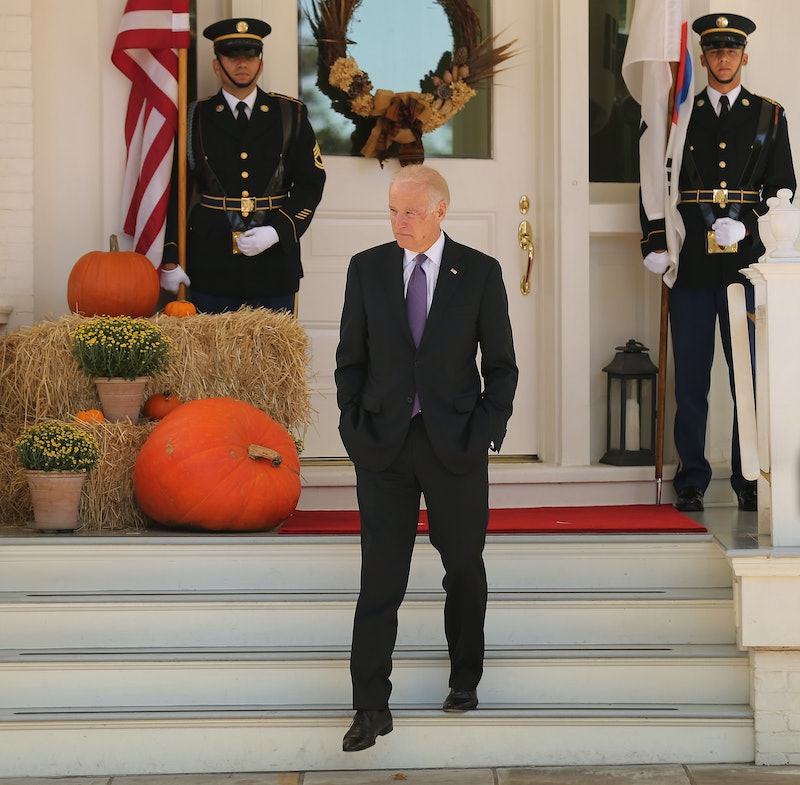 According to a Fox News report, after months of speculation, Joe Biden will finally announce his candidacy for president. Biden has kept voters on the edge of their seats waiting to hear whether or not he will challenge Hillary Clinton for the Democratic nomination, continually pushing back deadlines and even sitting out the first Democratic debate on October 13. Fox News White House correspondent Ed Henry cited three anonymous sources confirming that Biden will run in 2016, so all the waiting may be over soon. If this report is true, when will Biden announce his candidacy for president?

The Fox report didn't specify when Biden will make his highly-anticipated announcement, but NBC News cited two anonymous sources saying it will happen in the next 48 hours. According to NBC, the vice president traveled from his home in Delaware to Washington D.C. Monday for a climate change summit, and will give a speech on "The Mondale Vice Presidency And Its Legacy" Tuesday. So his schedule doesn't indicate a big announcement. However, the announcement was probably planned in advance, and could just be a video that's suddenly released, the same as many presidential candidates' official announcements, including Clinton's.

Of course, Biden has missed multiple previous deadlines, so it's difficult to know if he'll meet this one. As The Washington Post reported, NBC's 48-hour estimate is the 12th supposed timeline for Biden's announcement reported since February. The recent timelines all agreed that October would be the time for the vice president to make his decision, but NBC gave the shortest window. So if America doesn't hear from Biden in the next two days, there's a good chance we will by the end of the month.

In a CNN/ORC International poll following the Democratic debate, Biden ranked third, with 18 percent of support from Democratic voters, behind Clinton's 45 percent and Bernie Sanders' 29 percent. The vice president's fan base has dwindled slightly as more time passed without an announcement — in August, 53 percent of Democrats wanted him to run for president, and now it's 47 percent.

An announcement within the next 48 hours would fall just before Clinton's controversial congressional hearing about the 2012 Benghazi attacks, scheduled for Thursday. With Clinton under scrutiny, this week would be a strategic time for Biden to finally say he's running against her. As the House of Representatives and the country question Clinton's trustworthiness, Biden would swoop in as a favorable alternative.