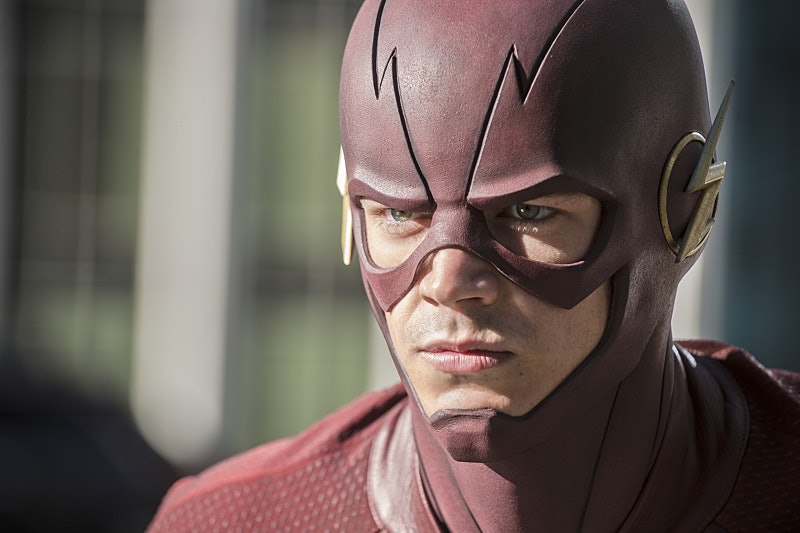 Well folks, things aren't looking so hot for Team Flash right now. For one, they have to worry about 52 breaches that connect their world to another, aka Earth-Two. And these breaches are sending over metahumans from Earth-Two, many of whom seem to be stronger and more difficult to beat than in Earth-One. But the most important foe Barry and his team now have to face is the new villain on The Flash, Zoom. Now, I know there is likely to be some confusion over Zoom vs. Reverse-Flash from Season 1, aka Eobard Thawne, who was disguised as Harrison Wells (did I mention it's confusing?). We know that Eobard Thawne was erased from existence when Eddie, his ancestor, sacrificed himself for the good of mankind, and can't be Zoom. But is it possible that we've still already met the person behind Zoom? Or at least, a version of them?

If Earth-One and Earth-Two feature the same people, as Martin Stein explained, but those people have made different choices that have led them down other paths, isn't it possible that a familiar character in Earth-One could be totally different in Earth-Two? That means Cisco could already be Vibe in Earth-Two, or perhaps Henry and Nora Allen are both alive and still happily married. Anything is possible, which means that Zoom from Earth-Two could be the counterpart to someone we already know (and even love) on The Flash. If this is the direction Season 2 goes, Team Flash is not only in for a tough physical battle, but a severely emotional one as well. Here a few familiar faces who could be under Zoom's mask.

Before he was murdered, Harrison was a scientist happily married to Tess Morgan. In the original timeline, he was always meant to create the particle accelerator, but that life was cut short when Eobard Thawne caused the couple to get in car crash. The crash killed Tess, and Harrison died when Eobard took his identity and body using a strange piece of machinery.

Couldn't it be at all possible that the Harrison Wells in Earth-Two did in fact create the particle accelerator, and was never replaced by Eobard? Maybe thanks to tinkering with that accelerator, the real Harrison gained speedster-like powers and became evil.

We know that Eobard Thawne from Earth-One was erased from existence after Eddie killed himself. But what if Eobard Thawne from Earth-Two also traveled back in time? In this instance, he would likely have been going after Jay Garrick instead of Barry, but maybe he learned about the other Flash and is now wants to get rid of them both. Eobard's different background in Earth-Two could also account for the differences between Zoom and Reverse-Flash.

If the speedster mantel has been carried by different Thawne descendants, why can't it be possible that the Eddie from Earth-Two is actually evil? It only takes a few changes for Eddie in Earth-Two to become bad. Plus it would bring Rick Cosnett back to the series, and who doesn't want that, even if it does mean an evil version?

Martin Stein said it himself, people from Earth-One can be entirely different in Earth-Two. Who know what Earth-Two Barry has endured? Something could have turned him into an evil speedster, especially if Jay Garrick picked up the title of the Flash before Earth-Two Barry could surface.

Is this is the case, the two Barrys might come face to face and battle each other at some point, which would be amazing to watch.

Despite all of these possibilities, in the end, it's most likely that The Flash will bring in a completely new character, though possibly familiar to DC Comics fans, as Zoom. Perhaps we'll be seeing fellow villainous speedster Hunter Zolomon, who actually uses the name Zoom in the comics. Or maybe it's someone else completely that we've never met before and then have to guess which comic character they are most like. Either way, it would be fun to bring in some new blood and not have to worry about Barry feeling betrayed by someone he trusts.

Whether Zoom takes off that mask to show an entirely new face or one we've grown accustomed to since the first episode of The Flash, at least we know it will be a thrilling reveal.