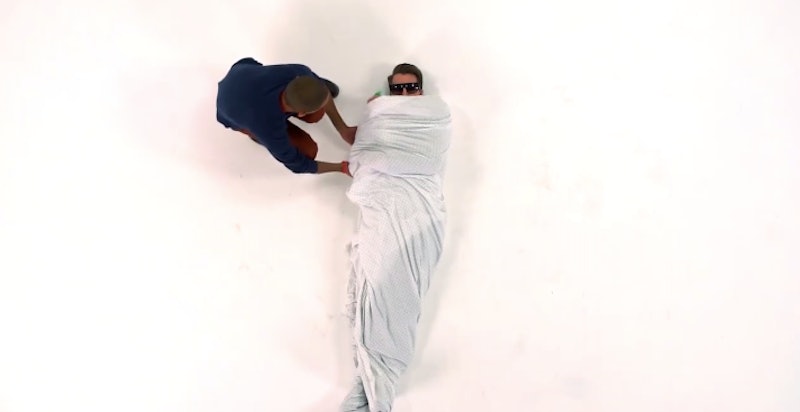 Before you have a kid, there are a few things everybody preps you for: The mountains of dirty diapers; the rivers of baby spit-up; the very real fact that no, you will never ever sleep again. Yet the travails of swaddling a ridiculously squirmy baby? That's something you don’t really learn about until it’s actually happening to you and you are going insane. A new video from Babble reminds us of that fact this week, by asking a bunch of unsuspecting college kids to swaddle an adult man named Shawn, who expertly plays the role of a wriggly baby who just doesn't wanna lay still. Meanwhile, fellow parent Kristen plays referee (aka watches on with amusement).

As the video starts, one collegiate swaddler attempts to swaddle Shawn on his own and soon finds himself begging for assistance. “Okay, help,” he complains, not long after his first attempt. “Oh my God, this is the worst thing,” says another novice swaddler. “I feel like it’s mummifying a baby,” jokes another.

Yep, it's safe to say these guinea pigs were not psyched about the job of swaddling, and probably never want to do it again. Despite their best efforts, they do not become swaddling pros by the video's end. (Spoiler alert). What they do learn? As Shawn puts it, “that sh*t is hard.” (#TRUTH.)

For starters, there's the very real and basic fact that flailing arms and legs can be impossible to control.

And that the perfect wrap can sometimes seem super elusive.

But no matter how awkward you may think you are at swaddling your first time, you'll never be as terrible at it as this crew.

Needless to say, you should never ever do basically anything you just saw above with an actual real-live baby. While the video's exaggerated take on the age-old practice of swaddling is hilarious, it's just that — an exaggeration. Still, swaddling is more difficult than you might think. For one, the corners of the blanket need to fold around the baby in a secure manner, and you don't want things too loose or too tight. A loose blanket is a major no-no, according to the American Academy of Pediatrics, because of the risk that the blanket may cover the baby's face. Infants lack the reflexes to remove the swaddle themselves, which could lead to suffocation.

And if you've never swaddled before, and are wondering why on earth anyone would wrap a baby so tight, here's the story: Swaddling has been practiced for literally centuries as a way to help help soothe fussy babies. It can also help newborns drift off to sleep, according to HealthyChildren.org.

The American Academy of Pediatrics has a bunch of recommendations for how to swaddle safely, which you can read about in full. Their most important tips? To reduce the risk of SIDS, always place a swaddled baby on its back, and stop swaddling by the age of three months or even earlier, especially if the baby shows signs of being able to roll over.

But for parents who are just as mystified by the art of swaddling as the college kids in the video above, there is some good news: There are now plenty of brands on the market that sell pre-wrapped swaddle blankets. So instead of having to perfect your own wrap by starting from scratch, you can just slip your little baby into the wrap quickly and easily, keeping it in place with Velcro closures.

The bottom line? Just avoid doing basically everything you saw in that video, and you'll already be ahead of the curve.

More like this
5 Crystals For Anxiety
By Megan McCarty
5 Crystals To Manifest Better Sleep
By Megan McCarty
Here’s What Sarah Jessica Parker’s Canned Cosmo *Actually* Tastes Like
By Emma Garza
What Is “Night Luxe?” Breaking Down TikTok’s New Aesthetic
By Courtney Young
Get Even More From Bustle — Sign Up For The Newsletter