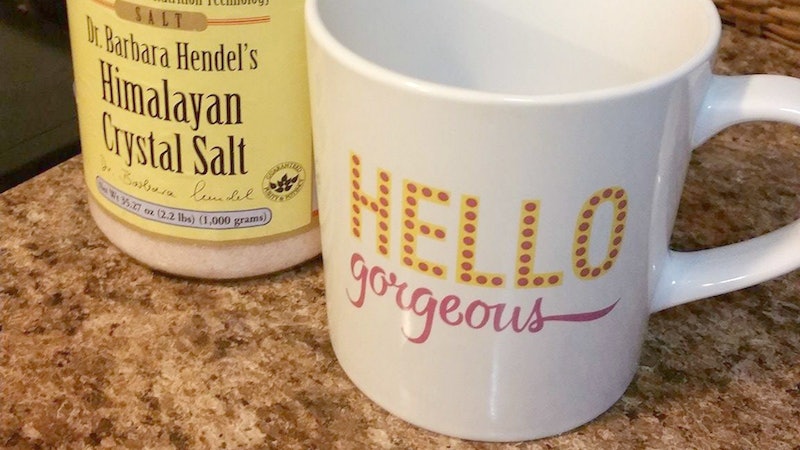 When an article landed on my desk about the virtues of adding salt to your coffee — who knew that apparently salt reduces the bitterness of coffee? — I couldn't not read it. With regards to writers, there are a few nearly universal truths about the lot of us. If one were to whip up a personal ad for a like-minded companion, it might read something along the lines of: "SWF (single writing female) seeking SWM (single writing male) for wordplay and more. Ideal partner will be a bewildering vortex of ego and self-doubt. Stubborness and obsession with first editions is a plus. Must love coffee."

Did you catch that last part? Because it's key. There's a reason the generalization of writers loitering at coffee shops exists, and it's not just the free WiFi — coffee is part of the creative process for many writers, myself included. It's what greases the ol' writing cogs and gets the wheels turning, so to speak. Having said that, I have never been able to overcome the bitterness in a cup of joe. So while my husband swigs his unadulterated, I enjoy coffee of a decidedly more diluted variety. In other words, I'm considering buying stock in pumpkin spice creamer.

The theory behind adding salt to your coffee is actually scientific and, really, it makes a great deal of sense. Common salt, or sodium chloride, is often used as a flavoring agent in cuisine. Why is this, exactly? Well, research shows that sodium chloride liberates sodium ions when mixed in an aqueous solution. This, in turn, suppresses bitterness and — voila! — flavor is enhanced.

In other parts of the world, salting coffee is quite common. Even Food Network guru Alton Brown has been espousing the use of salt in the making of his "Man Coffee" for years. As someone who would rather toss back a pint of pickle juice than endure the bitterness of black coffee, I decided this was a theory I needed to put to the test personally. After all, it just might revolutionize the way I imbibe my favorite brewed beverage.

My first order of business in adding salt to my coffee was determining how much salt I should be adding. What I discovered, though, is there is no tried-and-true approximate measurement. Rather, the overwhelming consensus was simply to "add a pinch," but I didn't sweat the vagueness of this detail. I'm Southern — our cookbooks are filled with dashes, pinches, teensy bits, and skoshes. Similarly, this experiment relies on a perfectly imperfect system. I can dig that. Next, I chose which coffee with which to test the theory, eventually settling on a garden variety instant brew medium roast. A quick forage of my pantry yielded two different types of salt: Iodized table salt and Himalayan crystal salt, the latter of which I typically use more often. Not finding much information on the difference (if any) between the two in coffee, I decided to give them both a go. As I would any morning I make instant coffee, I added the coffee grinds and water to my coffee maker and hit the brew button.

Again, I'd like to preface this by saying I don't typically drink black coffee. So, if I had to put into terms my reaction to taking a few sips of my freshly brewed black coffee sans salt, I think "blech" adequately sums it up. I would not have finished this cup of joe without some emergency TLC courtesy of creamer and sugar. I should also note here that, based on the wisdom of some coffee connoisseurs, I brewed another small pot of coffee with salt in the grounds. I noticed no taste difference between the two.

Coffee with a Pinch of Table Salt

Using my husband's Man of Steel mug, I added a pinch of table salt to my coffee. I swooshed it around a bit — very technical terms, I know — and took a sip. To my amazement, the coffee was noticeably less bitter. I kid you not.

Coffee with a Pinch of Himalayan Crystal Salt

Would there be a different between using regular table salt and my fancy shmancy Himalayan crystal salt? Using my own coffee mug this time, I added a pinch of the pink stuff (yes, the salt is pink) to my coffee and commenced the swooshing. Again, the taste was definitely less bitter. It was even less bitter than the regular table salt, although it did taste more briny.

Who thought up this sorcery? To be honest, as someone who typically cannot stomach black coffee, I was a little blown away by this — enough to call my black-coffee-chugging husband at work and give him a play-by-play. Do I think he'll be as impressed as I am? Meh, probably not. He didn't have much of a problem with coffee's bitterness to begin with. But if you are looking to cut back on sugar consumption and can't make it through the day without coffee, I think adding salt to your brew will do... in a pinch (ha, ha). I'll very likely resume my normal frothy-coffee consumption, although I did notice I used less creamer than normal to transform the contents of my mug into pumpkin spice nirvana.

More like this
TikTok's Favorite Bartender Thinks Mimosas & Bloody Marys Are Out For Brunch
By Alexis Morillo
Are We Drinking Rosé All Wrong?
By Sheila Yasmin Marikar
Meet The Spice Company Founder Who Sees Chai As A Metaphor
By Madhuri Sathish-Van Atta
Here’s What Sarah Jessica Parker’s Canned Cosmo *Actually* Tastes Like
By Emma Garza
Get Even More From Bustle — Sign Up For The Newsletter