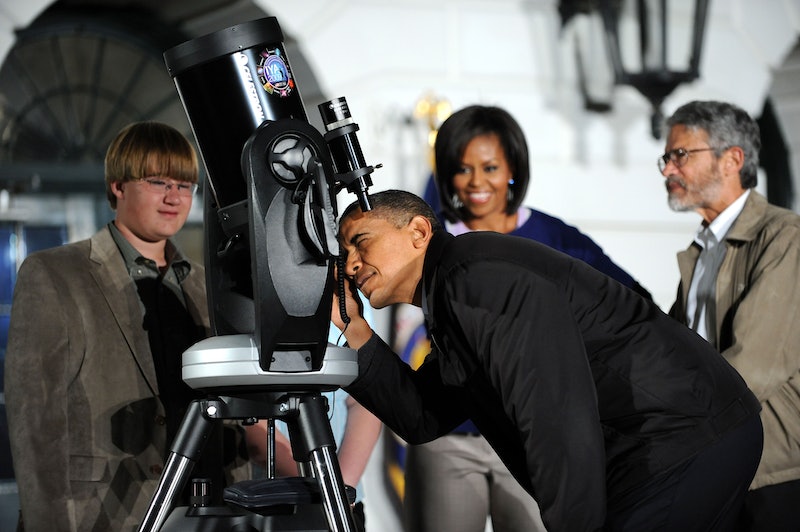 Ahmed Mohamed, the 14-year-old Texas student arrested for taking a homemade clock to school last month, was personally invited by President Obama to attend the White House Astronomy Night on Monday. Obama took a special interest in Mohamed after his invention was mistaken for a bomb by his school's faculty, tweeting: "Cool clock, Ahmed. Want to bring it to the White House? We should inspire more kids like you to like science. It's what makes America great." Now, the teenager will get to meet other kids with a love of science in Washington D.C. But, what is the White House Astronomy Night?

President Obama started Astronomy Night in 2009 to encourage American students to pursue careers in the STEM fields: science, technology, engineering, and math. Students who have a knack for inventing things or are interested in the sciences — like Mohamed — will meet on the South Lawn of the White House to gaze at the stars, participate in STEM-related activities, and hear from NASA astronauts and other scientists about their experiences exploring space and different areas of research. A White House blog post about the event says: "Inspiration can come from anywhere, but the mind truly expands when the eyes turn skyward and take in the vast expanse of stars and planets visible in the night sky."

At the first-ever Astronomy Night six years ago, Obama said to the students and scientists gathered:

There are a lot of mysteries left and there are a lot of problems for you students to solve. And I want to be a President who makes sure you have the teachers and the tools that you need to solve them.

Tied to the White House event, national parks, observatories, schools, museums, and astronomy clubs across the country will also host an Astronomy Night on Monday. To see if there's a stargazing event near you, check the map on the White House blog.

Mohamed, a high school freshman, arrived in Washington over the weekend, tweeting a photo from the plane window announcing his arrival. He was awarded the "American Muslim of the Year Award" by the Council on American-Islamic Relations on Sunday, and according to USA Today, he told the group he wants to fight discrimination. Unfortunately, he couldn't bring his homemade clock to show President Obama because it's still being held by the Irving Police Department in Texas.

Considering he was wearing a NASA t-shirt when he was arrested, Mohamed must be pretty excited about Astronomy Night.