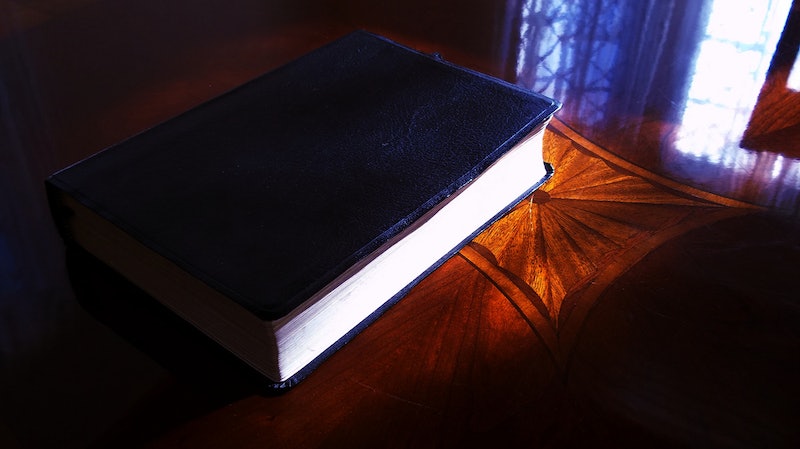 The Bible is not exactly the first source that comes to mind when you think of feminism — after all, a collection of literature written thousands of years ago isn't going to be impressive in its gender relations by modern standards. However, there are still a lot of feminist women in the Bible, women who are strong or outspoken or overcome great odds or simply question the status quo around them. And we really ought to recognize them more — after all, they are pretty important figures in the best-selling book of all time!

Traditional interpretations of the Bible generally support a very patriarchal worldview, but as someone with both a religious studies degree and eight years of Catholic elementary school under her belt, I can tell you with certainty that there are numerous ways to interpret the Bible, just as there with any lengthy written work or ancient text. So while historically, people have not paid as much attention to the women in the Bible, there's no reason we have to interpret them through the same patriarchal lens.

The truth is that there are a lot of amazing women in the Bible, women who have plenty of feminist appeal if you choose to look at them from that perspective. The women in the Bible might be relatively few, but they are still there and many of them are downright amazing, in any number of ways. Here are nine women from Scripture that I would definitely call feminist.

That's right, the feminism in the Bible goes all the way back to the beginning. For centuries Eve was used as a way to "prove" women's inferiority — she was called lesser because she was created from Adam's rib and she was called wicked for eating the forbidden fruit. However, laying aside the fact that in the first chapter of Genesis — which scholars consider to be the Ancient Hebrews' oldest and original creation story anyway — men and women were created together equally, there's still the fact that Eve herself is pretty cool when you look at her from a different perspective.

Eve is the only one in the Garden of Eden story that actually questions the status quo — or questions anything at all. She also shows no sign of seeing herself as anything other than equal to Adam and as having every right to make her own choices, whatever they may be. She is willing to try something new, to seek out something different, and to take a risk. And after it doesn't work out so well, she goes on to live her life anyway, raising children, becoming the mother of all humanity, and living to be 511.

Basically, Eve isn't just the first woman in the Bible, she's a pretty epic one, too.

Esther is one of two women with a book of the Bible named for her. She also risks her own life to more or less single-handedly save the entire Jewish people. According to the Bible, Esther was a Jewish girl living in the Persian Empire and raised by her cousin Mordecai. When the emperor divorces his wife and tries to find another from among the beautiful women in the kingdom, Esther catches his eye, but doesn't tell him that she's Jewish.

Not long after, her cousin Mordecai provokes the wrath of the king's prime minister, Haman, who then hatches a plan to kill all the Jewish people in the Persian Empire. Esther then defies Persian law by presenting herself to the king without being summoned. She tells the king that she is Jewish and that Haman wants to kill her an her people. The Jews are saved, Haman is punished, and Esther establishes a memorial celebration that becomes the festival of Purim, which is still celebrated today.

So basically, Esther was a badass who, instead of sitting by and playing it safe used her power to advocate for others, stood up for her people, saved countless lives, and forever changed Judaism.

Deborah and Yael (also sometimes spelled Jael) are both heroines in the Book of Judges, and both are pretty badass. Deborah is a prophet among the Ancient Israelites, and the only female judge mentioned in the Bible. She helps lead an attack against the Canaanites and prophesies that not only will the Israelites win, but that the glory of killing the enemy commander will go to a woman.

After the battle the Canaanite military commander Sisera escapes and is welcomed to rest in the tent of a woman named Yael who plays along as a good host until Sisera when she then kills him by driving a tent peg into his head (as pictured above).

Both women got things done, didn't let gender norms stand in their way, and were generally pretty damn cool.

Ruth, the other woman with a book of the Bible named for her, wasn't originally Jewish, but married into a Jewish family. After her husband died, she chose to stay with her mother-in-law, Naomi, instead of returning to her own family. She and Naomi returned back to Naomi's home of Bethlehem and Ruth worked to help support them.

Ruth fell in love with a wealthy landowner named Boaz and eventually married him, still taking care of Naomi after remarriage. She became the great-grandmother of King David (and thus also an ancestor of Jesus), and is remembered as noble and kind.

Ruth might not have been off winning battles or saving lives, but there are all kinds of ways to be strong. Ruth goes her own way in life and chooses the life she wants, even if it isn't what's expected of her. She supports herself and the people she loves. And that all sounds pretty feminist to me.

Mary Magdalene was one of the disciples of Jesus in the New Testament. She first encountered Jesus when he cast out seven devils from her. In some Christian traditions she was a former prostitute, while other Christian interpretations don't support that. Everyone is agreed, however, that she was a faithful follower of Jesus who supported his ministry.

In all four gospels she's described as being with Jesus when he was crucified, and when Jesus rose again, it was Mary Magdalene and a group of other women who found the empty tomb, making her one of the first witnesses to the resurrection, and an important figure in the early church, one who represented the women in early Christian communities. She is mentioned by name 12 times in the gospels, more than most of the apostles. And to this day, she is still one of the most well-known women from the Bible.

Mary Magdalene, whoever she was before she met Jesus, was a strong, steadfast supporter of what she believed in, and the community she belonged to.

Hagar is an often-overlooked figure in the Bible. She was handmaiden to Sarah, the wife of Abraham, to whom God promised he would be the father of a great people. But when Sarah and Abraham failed to have a child, Sarah gave Hagar to Abraham so that he could father the chosen people with her. Hagar gave birth to a son, Ishmael, but Sarah became jealous and cast Hagar and Ishmael out into the dessert. The two were saved by an angel of God who told them to return.

Hagar isn't often held up as an example of a strong woman, but the thing that always gets me about her story is that despite all the terrible things that happen to her, she survives. She finds the strength to pull through. And that is nothing to scoff at.

Miriam, sister of Moses, is one of the more prominent women in the Book of Exodus. After her mother puts baby Moses in a reed basket in the Nile to save him, Miriam watches out for him, and her quick thinking ensures that he can grow up with her family even after he's adopted by an Egyptian princess. Miriam stood by her brothers, Moses and Aaron and helped bring the Hebrews out of slavery in Egypt, and she is perhaps best remembered as singing and playing a Timbrel or tambourine in joy after the Red Sea closed on Pharaoh's army, saving the Jewish people.

Miriam worked through her life to help her family, her community, and her people. She also took time to celebrate the victories. Which is also pretty cool.

Mary, Jesus's mother, is probably the best known and most-revered woman in the Christian tradition. She's come to represent a multitude of things, especially in the Catholic Church. She's also pretty amazing.

Mary was a pregnant single mother at a time when being a pregnant single mother was even more stigmatized than it is today. Never-the-less, when the Angel Gabriel told her that she would carry the son of God, according to the Gospel of Luke she takes on the challenge. She shortly after tells her cousin Elizabeth that she is proud to serve the God who "He has thrown down the rulers from their thrones/but lifted up the lowly." (Luke 1:52). The Mary that emerges from the first chapter of Luke is fearless, and eager for a new world, one where the traditional order is turned upside down.

Throughout Jesus's life and ministry, Mary supports him, and he points to her — in all her fearless, political glory — as exemplary. She is with him when he dies, and was glorified from the early days of the Christian church. She's held up as an example of a lot of things — love, motherhood, mercy — and feminism should definitely be among them.