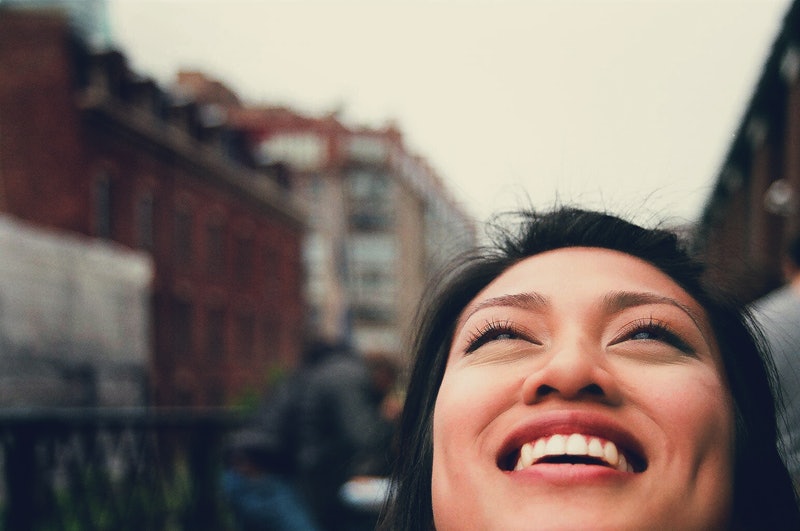 I'm sure many readers of Bustle define themselves as feminists; I'm one of them. But the sad truth is that feminism has a long and disturbing history of leaving important voices out — many white suffragettes, for instance, used racist material in their campaigns, and even today feminists like Sheryl Sandberg talk about "Leaning In" as something accessible to all women instead of an option given to a privileged few. So I applaud the new campaign #MyFeminismIs, which argues that feminism is for everyone, regardless of race, age, sexual orientation or gender — but only if we make it that way.

When many people think of a feminist, they might picture a 20-something, young white women on a college campus. The privilege inherent in that image — white privilege, class privilege, youth — is the reason that intersectional, inclusive feminism is so important. Intersectional feminism holds that many people do not experience various forms of discrimination (including sexism, racism, homophobia, transphobia, Islamaphobia, I could go on) as separate things, but as a system of interconnected oppression — for instance, a black women's oppression cannot be understood as simply racism or simply misogyny, but a mixture of both that feed off each other to create a completely different kind of oppression than what black men or white women face.

#MyFeminismIs is talking about this kind of feminism — see what I mean below:

"In fact, I never identified as a feminist," says Aisha Moodie-Mills, one of the women in the video and the CEO of Victory Fund and Institute. "And it's largely because I guess the images I had of what a feminist is, growing up, were really these images of white women and privilege."

"As a woman with a disability, the traditional white middle class feminism never worked for me," says Rebecca Cokley, the Executive Director of the National Council on Disability. "Because I was never going to be equal to a white man."

Noting that there are many different ways for women, men, and gender non-conforming people to be feminists, the campaign is asking other people to share what feminism — not just white feminism, or privileged feminism, but feminism for everyone — means to them with the hashtag #MyFeminismIs. So far, the responses have been really cool:

I like this campaign because it doesn't just talk about one, easily defined, institution capital-F feminism — it's talking about multiple kinds of feminisms. Feminisms, in other words, to give a voice for everyone.

Check out more of the responses to the hashtag #MyFeminismIs on Twitter.

More like this
Sandra Bullock, Girlboss Extraordinaire
By Matt Harkins & Viviana Olen
The 'Hocus Pocus' Sequel Finally Has A Release Date & It Makes Total Sense
By Shannon Barbour and Radhika Menon
10 Times Boris Johnson Got It Wrong On Trans Rights
By El Hunt and Sam Ramsden
Here’s What Sarah Jessica Parker’s Canned Cosmo *Actually* Tastes Like
By Emma Garza
Get Even More From Bustle — Sign Up For The Newsletter