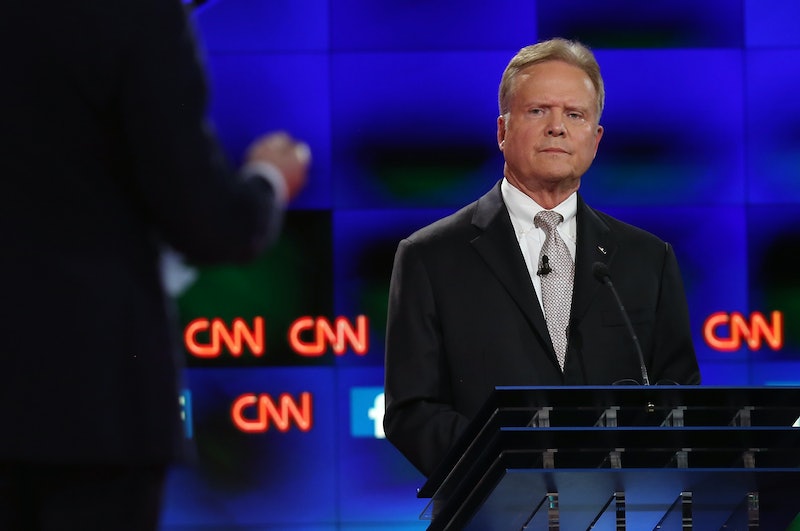 Democratic presidential candidate and former Senator Jim Webb is considering a third-party run for the presidency, his campaign said in an email Monday. The announcement came in the form of a press release, in which Webb's campaign said that he'll give a press conference at the National Press Club tomorrow to discuss "his candidacy, the campaign and his views of the political parties in the current election cycle." This might seem like a strange decision so early in the campaign, but given Webb's current feelings towards the Democratic Party, it's not a total surprise.

At last week's debate, Webb repeatedly criticized the moderators for not giving him enough speaking time. This isn't a terribly uncommon thing to hear at presidential primary debates, but Webb was mocked for his single-minded focus on this injustice, which at times seemed to override his desire to actually talk about substantive campaign issues.

"How this debate's occurred is kind of frustrating," Webb said during one exchange, "because unless somebody mentions my name, I can't get into the discussion."

"You agreed to these rules, and you're wasting time," moderator Anderson Cooper shot back.

"Well, I'm trying to set a marker here so maybe we can get into a little more later on. This hasn't been equal, equal time," Webb replied.

Days later, Webb claimed that the debate was "rigged" in favor of Hillary Clinton and Bernie Sanders, adding that it's "very difficult to win a debate when you don't have the opportunity to speak the same amount of time on issues as the other two did." Webb's demand for equal time was widely derided, as he currently stands at 1 percent in the polls and has done very little actual campaigning.

If Webb truly believes that the debate was rigged in favor of the two frontrunners, it makes sense that he'd say "screw it" and abandon the Democrats altogether. Furthermore, whether Webb truly has a place in the Democratic Party is debatable, as his many of his views are considerably more conservative than rest of the party. He recently defended the Confederate Flag, for example, a position that put him to the right of even some elected Republicans, and opposed comprehensive immigration reform, which has emerged as one of Democrats' central legislative goals over the last several years.

Webb's potential switch to a third-party bid won't overcome his anemic standing in the polls, but at least he'll not longer have to suffer being in a party that, in his mind, has stacked the deck against him.