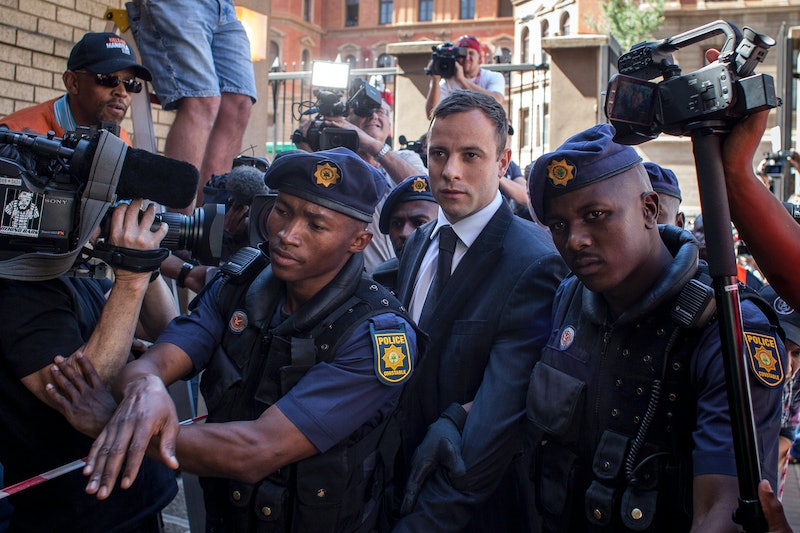 South African sprint runner Oscar Pistorius was released on house arrest Monday afternoon, after serving just one year out of a 5-year culpable homicide sentence. Pistorius was first charged in October last year for killing girlfriend Reeva Steenkamp in February 2013. Brian Webber, Pistorius' lawyer, confirmed the news to South African paper The Citizen, saying that Pistorius would be serving out the remainder of his sentence, which is set to be completed in October 2019, at his uncle's home in Pretoria.

The double amputee and Paralympic champion, who also became the first amputee to enter the men's 400 and 400-relay races at the 2012 Summer Olympics in London, England, was first arrested and charged with murder in connection with Steenkamp's shooting death on Feb. 14, 2013. At the outset of his trial, which began in March 2014, Pistorius entered a plea of not guilty, with his lawyers arguing that Pistorius had mistaken Steenkamp, 29, for an intruder.

Throughout the trial, the prosecution painted a picture of a troubled relationship, reading off text messages sent between Pistorius and Steenkamp, in which the South African model claimed she was frightened by his behavior toward her and couldn't handle his embarrassing "tantrums."

"I do everything to make u happy and to not say anything to rock the boat with you; You do everything to throw tantrums in front of people," Steenkamp wrote in one set of messages which were read to the court on March 24, 2014. "I have been upset by you for 2 days now." In another separate message, Steenkamp told Pistorius, "I'm scared of you sometimes, of how you snap at me."

Pistorius' defense lawyers maintained, however, that the two had been in a happy relationship, highlighting dozens of more "loving" messages between the two and that Pistorius may have been suffering from an anxiety disorder that may have made him susceptible to "fight or flight" behavior under stressful situations. They also countered the prosecution's charge that Steenkamp had been in a "cowering" position or covering her head in a protective stance when she was shot through the bathroom door inside Pistorius' apartment, with a ballistics expert claiming "there were no wounds and no brain tissue on the inside of her hand."

In the end, Judge Thokozile Masipa concluded that much of the prosecution's evidence was circumstantial evidence while simultaneously blasting Pistorius himself as a "very poor witness," declaring in September 2014 that while Pistorius was not guilty of premeditated murder, he was guilty of culpable homicide. "The accused knew there was a person behind the toilet door, he chose to use a firearm," wrote Masipa in her verdict. "Would a reasonable person in the same circumstances as the accused have foreseen the possibility that if he fired four shots whoever was behind the toilet might be struck and die as a result?" Pistorius was subsequently sentenced to five years in Kgosi Mampuru II Prison.

After his release on Monday, just one year later, much of the public seemed unenthused with the prospect of such a lax punishment. "[He's] getting off lightly," Steenkamp's cousin Kim Martin told BBC News in an interview.