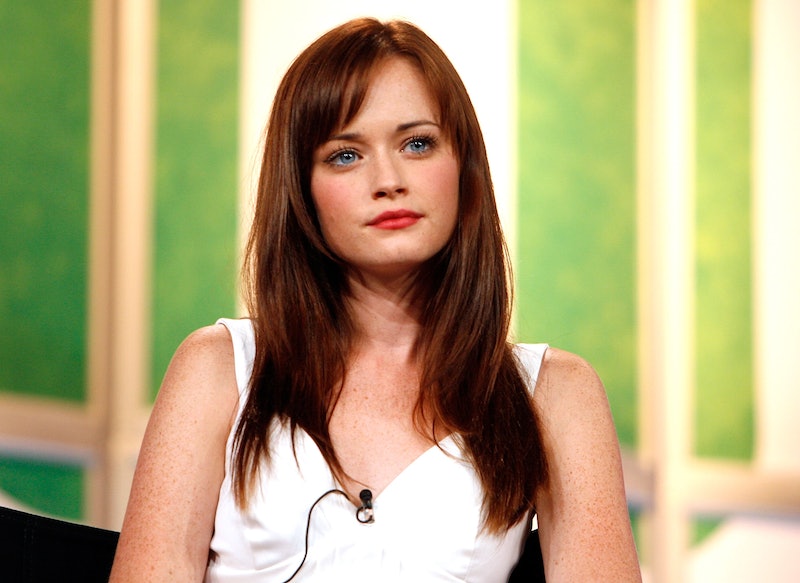 A long-awaited return might be in the works, and there are so many things that fans need to see happen. But most importantly, Rory should be single in the Gilmore Girls revival. I might be putting the horse before the cart a little, though. According to TV Line, talks are happening that would create a limited run on Netflix, which would give everyone's favorite family a much-anticipated conclusion to their story.

The revival hasn't been confirmed yet, and when Bustle reached out to Netflix, the site said that it's not commenting at this time. But that doesn't keep us from dreaming about what we would want to see. According to TV Line, the revival would consist of four 90-minute episodes, and all the major cast members are being courted to come back — including Lauren Graham, Alexis Bledel, and Kelly Bishop.

But it's been eight years since Gilmore Girls ended, and even more time will have passed by the time the revival actually airs. Which means that a lot will have changed, both in Stars Hollow and in the characters' lives. There are obvious questions we want answered — like how they will handle the death of Edward Herrmann, who played Richard Gilmore, and if Luke and Lorelai ever actually got together. But what is going on in Rory's love life? There's only one acceptable answer: nothing. And there are a lot of reasons this is the most logical course of action.

Have you read about the 2016 election? It's crazy, and Rory is probably way too busy covering Donald Trump's antics or running Hillary Clinton's communications team to be worrying about romance. We'll be seeing her again at the crux of her career. And if we know anything about Rory, it's that she'll probably be throwing herself 100 percent into whatever endeavor she finds herself in.

So We Get More Lorelai And Rory Screen Time

It will have been so long since fans heard a fresh Lorelai and Rory rant session, and we don't want to waste any time on unnecessary romance. Especially when it could be way better spent watching our favorite mother and daughter pair get coffee or throw out pop culture references that we might actually understand for once.

While there were some questionable decisions made when wrapping up Gilmore Girls, one extremely important thing happened: Rory realized it's okay to be on her own. She doesn't need a husband and a yard and an avocado tree to be happy — she can plant her own avocado tree! Since we last saw her, Rory has probably become fiercely independent, and a guy would just crimp that style.

So We Don't Have To Accept Some New, Unknown Character

It would be absolutely terrible if they just threw some random guy at us and expected fans to accept him as Rory's love interest. We all know that this will never be OK, so Amy Sherman-Palladino shouldn't even waste time trying.

Because She Probably Has Some Latent Commitment Issues We Can't Ignore

Lorelai is a great mother and all, but she's not the best in terms of setting an example for a healthy relationship. Let's be real — watching Lorelai jump around and refuse to fully commit probably had a way deeper impact on Rory than she might have realized. As an adult, it makes sense that she'll want to be just like her amazing mother. And she might have picked up on some of Lorelai's commitmentphobia as well.

Because The Plot Is Going To Need Some Kind Of Conflict

I'm sure that Sherman-Palladino will come up with some glorious way of bringing the group back together, but having Rory show up with a boyfriend/fiance/husband just won't work. Her happy ending will be tied up. And the idea of a Rory divorce plot arc just sounds very unhappy to me.

So We Can See Her Rekindle Her Romance With Jess

Honestly, this is basically the best reason for Rory to be single. There needs to be nothing in the way of her and Jess getting together. Sit down, Dean fans and Logan lovers — we all know Jess is the only one good enough for Rory. And he'll have had a lot more time to keep maturing and writing more books. They're obviously meant to be together.

Let's just be real: Having Rory already be in a committed relationship when the revival starts up will basically be like cheating fans. We're already getting a revival we dreamed of. Why dash our hopes and have Rory find her soulmate off screen? Unless it's Jess, and it starts out with them already together. That's really the only acceptable scenario.