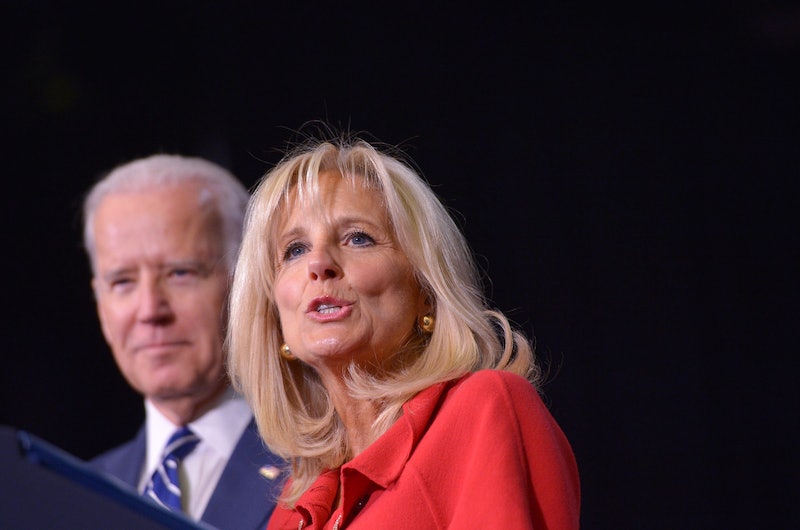 Over the past few months, the nation has been meticulously scrutinizing Vice President Joe Biden's life, searching for any indication of whether he would run for president in 2016. And on Wednesday, we heard it from the man himself: Biden is not running for president. However, amid all the pre-announcement speculation, one important thing seems to have been overlooked. Many people don't actually know who Joe Biden's wife Jill is. While being Second Lady of the United States is a pretty important job, she's not nearly as well-known as Michelle Obama. And aside from lending her name to a hilarious fake Twitter account, Jill Biden is is seriously overlooked by much of the country.

In addition to her duties as the wife of the vice president, Jill Biden — or Dr. Biden, as she prefers — holds down a full-time job. As a lifelong educator, it seems that nothing, not even the vice presidency, could get in the way of her true passion. After having taught community college in Delaware, Biden resumed her position as a full-time English teacher at Northern Virginia Community College. She's the first second lady to have ever held a full-time job while also fulfilling her political role.

That's not to say that her political duties are ignored. Although Biden reportedly didn't like politics when she and Joe were first married, she's definitely come around. She now organizes and sponsors countless organizations and initiatives.

Although her passion is teaching, in 1993, Biden founded the Biden Breast Health Initiative after several of her friends were diagnosed with breast cancer. The initiative works with high-school-aged girls to teach them about breast cancer and screening techniques, in the hope of increasing early detection.

She's also worked closely with military organizations to raise awareness and advocacy for military families struggling with deployment. Inspired by her stepson Beau, who was in the Delaware Army National Guard and passed away in May, the second lady worked with the Delaware Boots On the Ground initiative to help military families whose loved ones have been deployed.

But if Biden had gotten a promotion to first lady, it's very clear what her focus would be: community colleges. With her two masters degrees, her doctorate in education, and her position as the vice president's wife, Biden could probably have walked into any teaching job she wanted at any number of D.C. colleges. But instead, she chose to seek a position at a community college.