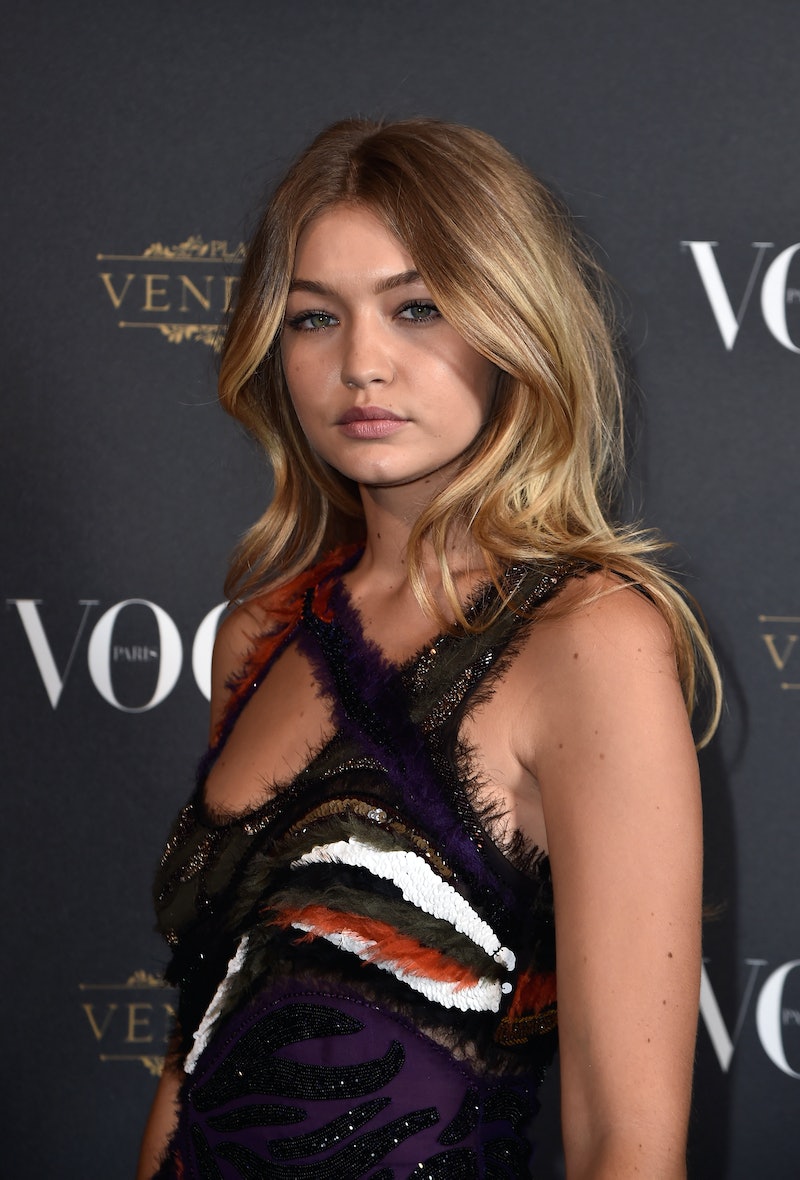 Celebrities are just like us. Sort of. Because while they do partake in autumn festivities like trick-or-treating and pumpkin patching, they do it with a little more flair. How does a model fashionably pick and pack the perfect gourd? Well, Gigi Hadid carried her pumpkin in her almost $2,000 Tom Ford purse. Because she's Gigi Hadid, people. Sure, she loves burgers and her boyfriend Joe Jonas as much as you do, but that doesn't make her a normal human being.

You could almost hear the Internet gasp as Hadid posted a snap of an orange pumpkin in the bottom of her designer white leather bucket purse on her personal Instagram account. The Tom Ford bag retails for $1,990 dollars, and is likely dirty and dusty thanks to a $7 pumpkin. Ah, to be famous and filthy (literally) rich. I'm just wondering how one cleans the inside of their ultra-designer white leather bag. I'll probably never find out.

Hadid captioned the photo with a couple adorable emojis and didn't seem concerned that her bag was full of something that was just pulled up from the ground. The rest of us? Well, we're just trying to will our Forever 21 bags to last till Christmas.

Here are seven other times Hadid was totally not a normal person, no matter how hard she tried.

1. That time she went to a high school graduation party...

...with the entire Kardashian-Jenner family. I have a feeling this was not the normal, punch-and-cake-from-the-grocery-store reception.

2. That time she supported her friend

Showing up to dance on stage with your bestie in front of thousands? Totally not normal.

3. That time she had girls' night

Her version of girls' night means hanging out with an entire squad of famous, beautiful women at Coachella.

And saw a giant billboard of herself. In Paris.

On the cover of V Magazine.

6. That time she went for a sweat sesh

...and looked like she was starring in a full-on Nike or Adidas ad. Oh, and her workout isn't a simple run on the treadmill either. A full boxing ring, just for Gigi.

7. That time she sat on the sidelines

With 2Chainz, as one does.

More like this
The Best Memes & Tweets From The 2022 Met Gala
By Olivia Rose Ferreiro
What Actually Happens Inside The Met Gala
By Jake Viswanath and Kelsey Nelson
What Is “Jello Skin”? The Latest Viral Trend To Know About
By Tomi Otekunrin
How To Master Baby Braids, According To TikTok
By Tomi Otekunrin
Get Even More From Bustle — Sign Up For The Newsletter