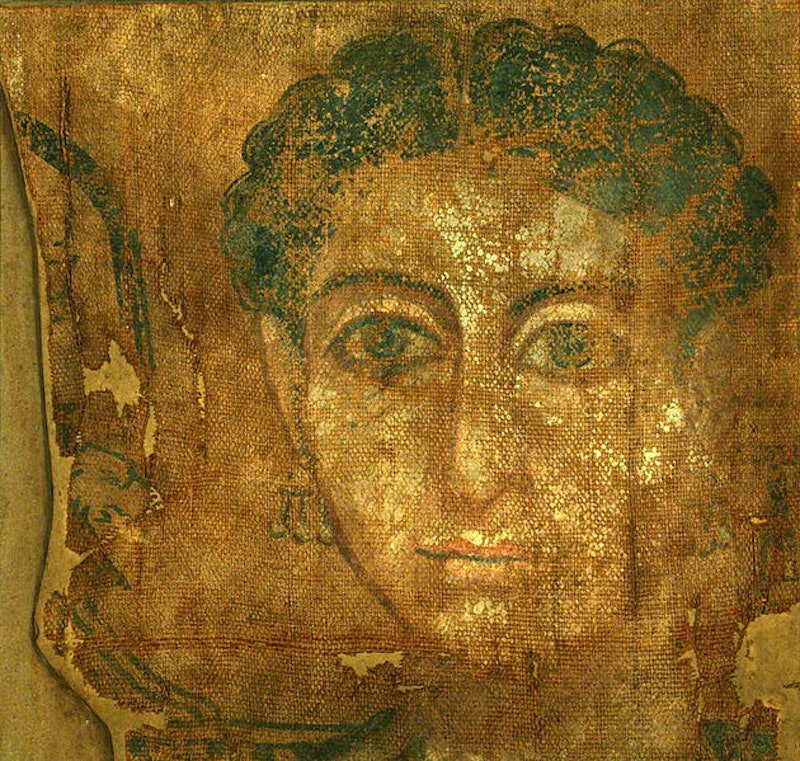 Have you ever taken time out of your life as a busy modern woman and wondered if, in the past, your peculiar mole might have caused people to believe that you are a witch? How about if you'd have made a good human sacrifice? Or whether your menstrual blood could provide health benefits to some elderly woman in need?

If not, you'd be considered seriously out of touch as a woman in many ancient societies. Women have had a strange run of it throughout history: at various different times, we've been revered, idealized as goddesses, thought to have the power to ruin crops and offend divinities, suspected of being in league with the devil, and generally been subject to a lot of fussy, confused scrutiny for thousands of years. This kind of scrutiny is part of what can make being a woman so difficult — but that sort of ridiculousness has produced some very entertaining myths about womanhood that really need to be shared.

Here's the crucial thing to remember about the weirder beliefs about women's bodies, minds and general talents in history: they weren't seen as weird at the time. We look back on these things from a position of enlightened medical knowledge and a context of equality and guffaw, but at the time these ideas were absolutely deadly serious.

With that in mind, check out seven of the strangest beliefs about women in history. Quite possibly a future civilization will look back at our "but women can't be Presidents!" worries and think the same thing about us (at least, that's what I hope).

1. We Can Find Out A Baby's Sex Using Barley, Wheat & Urine

This ancient test from Egypt is one of the first fertility myths in history. Apparently, if you were pregnant and wanted to find out the gender of your ancient Egyptian baby, people believed that the best way to determine it was to fill a small sack with wheat and barley grains, and then have the pregnant woman in question, well, pee on it. If the barley sprouted first, the baby would be a boy; if the wheat did, it was going to be a girl.

Pee tests are still used these days to attempt to "predict" the gender of a baby, by trying to detect the levels of testosterone in the mother's body. They're known to be pretty inaccurate, though. Weirdly, though, the barley and wheat test may not be as much of a myth as it first appears — because there does seem to be some kind of link between barley and testosterone. One study found that drinking boiled barley water boosted the levels of testosterone in the bodies of mice. It's been hypothesized that hormone levels in the urine may have prompted the grains in the sack to sprout — but still, you're probably better off waiting for the sonogram.

You can kind of understand where the ancient Egyptians got this one. A menstruating woman was the incarnation of fertility and youth; if you wanted to steal some of that from her, you may as well use the most potent symbol of her fertility. But smearing her menstrual blood all over yourself to stop your sagging?

This particular remedy comes from one of the most famous papyruses to survive from ancient Egypt, the Ebers Papryus — which contains all kinds of ideas about medicine, ranging from gynecological techniques to the prevention of ulcers. But the specificity of this instruction – the menstrual blood needs to be fresh from the start of another woman's period, and you can cover any area of your aging body, from the belly to the thighs — is pretty amazing. But again, not as kooky as it first sounds — because blood facials are still a thing.

3. Our Wombs Can Make Our Eyes Hurt

Thank the ancient Egyptians for this one, too — this comes from the Kahun Papryus, which is focused entirely on women's health issues. Some of the thoroughly bizarre ideas it contains about women's health look even stranger when you consider that women were actually allowed to become doctors in ancient Egypt; we know of several women who were famous physicians of their time, and who probably dealt almost exclusively with women's health problems. So with that in mind, the idea that aching eyes meant your womb was overflowing looks even sillier.

And yet, this was a very common belief. If a woman came to her doctor with aching eyes and a seriously sore neck, she was diagnosed with "discharges of the womb into the eyes". Fortunately, the Papyrus was hopeful that it could be cured. All you had to do was fumigate your womb with incense and oil, fumigate your eyes with goose fat, and eat an entire donkey liver. Basically a normal Tuesday night, right?

The ancient Greeks pretty much thought that women were put on earth to give birth — but that doesn't mean that they gave women props for it. Midwives in ancient Greece had a bunch of jobs, some of which were pretty normal — give the mother drugs, help with the positioning of the baby, cut the umbilical cord — and some of which were not: midwives had to bathe the mom and kid with sacred water as soon as possible, to wash away the "pollution" of the whole icky process. (The newborn might also be covered in another young baby's urine to protect it from witchcraft. And you thought christenings were hard.)

A lot of ancient Greek holy places had stricter rules about entry than your average high-end nightclub — and for women, they were particularly severe. Anybody who'd participated in a birth couldn't go near a holy sanctuary for three days in case they "polluted" the place; the women and babies themselves would have to wait longer. You had to purify yourself extensively before you were allowed in, because childbirth was seen as an aspect of human life that the gods were pretty squeamish about.

This belief dates from the Edo period in Japan, between the 1600s and 1868. The myth of the Jorōgumo, or spider-woman, might sound like a Japanese version of the similarly-named American superhero, but the Edo spider-woman was no savior to the people of Japan; she was actually a threat. The myth of the Jorōgumo suggested that the lovely lady who takes you home and starts playing the lute for you may actually turn out to be a 400-year-old spider. No, really.

The kanji for Jorōgumo literally translates as "whore spider", which is its own brand of hilarious — but the belief, with its attendant gross sexism, isn't funny. A jorōgumo was a goblin-creature disguised as a seductive woman who lured men into a trance by playing a biwa, a traditional Japanese lute-like instrument. They'd then do what spiders do, namely bind their victim in silk and devour the body. Charming.

The Inca had some particularly strange ideas about women in general. One of particular note was their cultivation of the Chosen Women, or Virgins of the Sun — beautiful and talented young women who were shut up in temples for six or seven years. The chosen women, known as acllas, were essentially trained as religious practitioners, weaving and preparing things for festivals — except that their fates differed radically from those of nuns. An aclla could be given to a noble as a wife, reserved for the Incan leader himself, or — highest of honours — sacrificed to the sun god, Inti.

The extremely cloistered aclla girls chosen for the task were sacrificed alongside particularly beautiful small children, and their deaths elevated the status of their families hugely, if that made them feel any better. We actually have several almost perfectly preserved examples of acllas who've been sacrificed on mountaintops in the Andes, but a lot of them were also sacrificed in their hometowns. Poor girls.

7. If We Have Three Nipples, We Might Be Witches

Pity the women of post-1400s Europe and what they had to put up with after the book Malleus maleficarum, or Hammer Of The Witches , was published by two Dominician friars in 1486.The book really stoked medieval Europe's worries about witchcraft — and had some "helpful" hints regarding how to find a witch in the wild. Beliefs about recognizing witches differed between countries, but one common idea was that a witch's "familiar," or disguised helper (usually an animal) actually fed off her breast milk, so witches could be identified by their third nipple, which they used exclusively for that purpose. Very efficient of them, really.

Looking for the "teat," which was sometimes also called the witch's mark (meaning that it could be a mole, bruise or any kind of bodily marking), was one of the big tests for prosecutors seeking proof of a woman's witchy-ness. If that didn't work, inquisitors might try other tactics. Sometimes, a disgusting concoction of ashes and the victim's pee might be made into a cake and fed to the poor woman's pet, in the hope that it would somehow get the power to speak or act weirdly, which would be proof that it had been bewitched. Lovely for everybody involved, I'm sure.