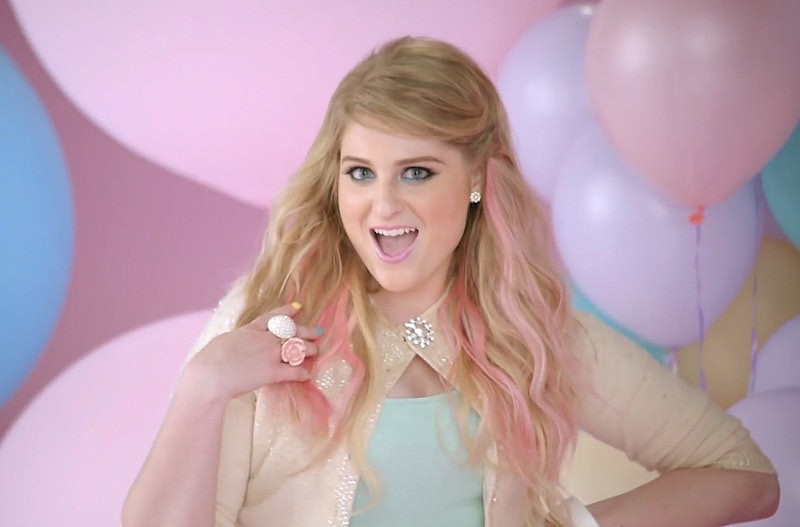 Woman-on-woman hate has been getting a lot of attention lately. Step up, Nicki Minaj calling Miley Cyrus on her comments at the VMAs, or Taylor Swift and Katy Perry's ancient feud over professional difficulties. But beyond girl fights, there are more loaded, everyday statements in many women's lives that create shame and stigma where they shouldn't exist.

Feminism is, in many ways, an eye-opening introduction to peoples' uses of language. "Man up." "Don't be such a girl." Projects like Everyday Sexism accumulate the evidence of statements which, whether micro-aggressions or obvious big-scale sexist nonsense, perpetuate the idea that being a woman is low-status, vulnerable, shameful, stigmatized, and has very clear lines of "acceptable" behavior.

The thing about this is that it's not just men doing the talking. Women can be sexist shamers too — about controlling bodies, about being a "good" girl, about babies and work and men, about basically anything. And we need to be aware — and own up to it.

Sure, you can criticize another woman — but you shouldn't shame her for her life choices or interpretation of womanhood. So next time you open your mouth, check yourself before you end up in these subtle shaming traps.

The whole "strong is the new skinny" thing is more than a bit problematic. Health is one thing, but the ethos of this Pinterest-friendly slogan is still "you're not good enough" — it's just that your not-being-good-enough is being measured in sit-ups and muscle mass, not your weight (theoretically). Both are metrics of insecurity in one form or another.

What about "having pleasure in your body is the new skinny," or "being happy is the new black," or something less inclined to make people feel bad about their bodies?

2. "You're So Brave For Juggling A Job And A Family"

When a woman's being called brave — and she's not facing gunfire, serious public criticism, or life-threatening circumstances — it generally comes off as fantastically condescending. Trying to "have it all" isn't inherently brave — but the statement kind of acknowledges that everybody believes these women are going to fail. Whether you prioritize home or work, something's expected to give, and you're going to be punished.

Yes, you've got to be brave to admit publicly you're trying for a "work-life balance" — or, indeed, are taking time off to have a kid, or basically are making any choice about your personal future. But that's because somebody will cluck their tongue and tell you you're "strong," and you'll be left wondering why you're Superwoman all of a sudden.

3. "You'll Get Pregnant If You Just Relax"

The subtle shaming of people struggling with infertility is something I've written about before, but it's one of the primary ways in which an unseen sense of blame creeps into inter-female conversations. It's horribly common for other women to give advice that makes it seem like the failure to have kids is the woman's fault.

Just relax! Stop worrying about it! My husband's cousin's second wife tried so much IVF and finally she just let loose and it happened naturally! As if anecdotes are suddenly going to make both sperm and egg sit up and go "Well, if Marcia's distant relative can do it, so can we!" Advice is often not meant to be shaming in the slightest — but the notion of some kind of mental block being in the way of fertility is shaming.

Yes, Gwyneth Paltrow, I'm talking about vulva steams — and labial shaves, and douching, and all the other industries that seem to have sprung up around the idea of women not being "natural" in intimate areas. Jenny Slate just had a "vagacial" for Lenny Letter, Lena Dunham's new feminist newsletter, and she was about as unimpressed as you imagine Jenny Slate would be about anything as silly as that.

Body hair is one thing (and frankly woman are not subtle at shaming you about that one), but the idea that a vulva — which is a self-cleaning, pH-balanced, highly-varied organ that shouldn't have to adhere to anybody's ideas of beauty — is exposed to such nonsense is both offensive and medically dangerous. You want to give yourself a yeast infection? Clean out all the vulva's natural bacteria with fragranced douches. But please don't give me the same advice.

This is the ultimate in subtle shaming moments. It seems empowering, it's supposed to be inclusive, but all it really does is exclude people further. You can see how unfair this phrase is if you substitute "curves" for other words: Real women have hair? Kidneys? Both legs? I think you'll find that all "real women" have to do is not be ghosts, and also identify as women.

They don't have to have vaginas, boobs, or a large amount of female hormones in their blood. Real women have whatever the hell they like, frankly, and telling everybody else outside a given category that they're not "real" or "valid" or actually womanly is, fundamentally, really rude.

More like this
25 Inspiring Quotes From Black Women To Celebrate Black History Month
By Kyli Rodriguez-Cayro and JR Thorpe
24 History-Making Black Women You Probably Didn't Learn About In School
By Ayana Lage and JR Thorpe
Twitter Is Identifying With Sally Field & Jane Fonda’s Friendship In New Viral Video
By Jake Viswanath
An Expert Weighs In On The Viral Raw Carrot Salad Trend
By Alexis Morillo
Get Even More From Bustle — Sign Up For The Newsletter
From hair trends to relationship advice, our daily newsletter has everything you need to sound like a person who’s on TikTok, even if you aren’t.