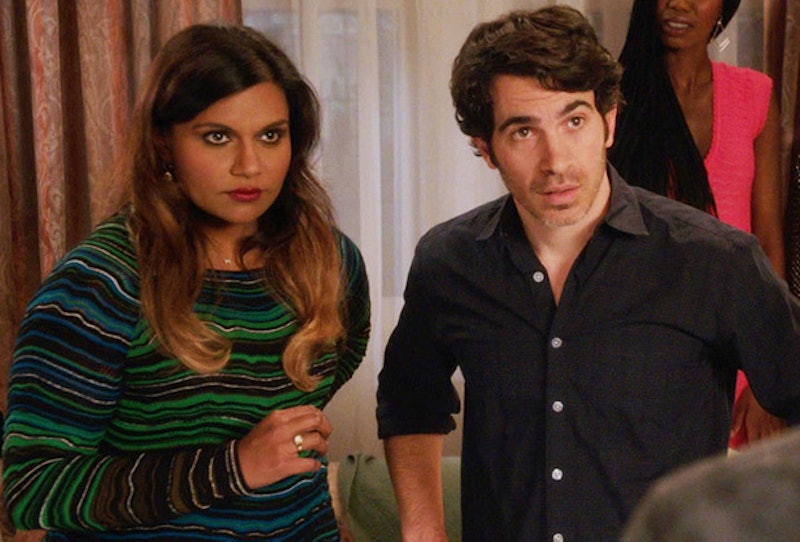 When The Mindy Project moved from FOX to Hulu for its fourth season, fans we're both delighted and concerned. "Would The Mindy Project change after its move to Hulu?" we questioned, eagerly awaiting its premiere. Mindy and the gang were quick to refute any such suggestions, and, for a while, we were put at ease. After all, we wouldn't really be able to understand if there were/weren't changes until the show premiered. Now, as we've just hit the six episode mark on Season 4, we're given an episode that just feels different. An episode that probes the same question we wanted answers to before the season premiered, but this time the question isn't tensed in the future. So... has it changed? Is The Mindy Project different?

Though I wish it were a bit more clear, the answer is both yes and no. In structure and format, the show has changed, but we knew that would happen even before the new season aired — as EW reported that Mindy Kaling and executive producer Matt Warburton explained technical shifts during the Television Critics' Association press tour in August. These obvious shifts, such as Hulu's order of 26 episodes instead of 21, and the new three act structure, as opposed to four act structure the show had to adhere to on FOX, are present, but not jarring.

However, the latest episode of The Mindy Project feels a little less Mindy-ish than usual and seems to suggest that there might be more alterations on the horizon.

Let me explain this further. What works with The Mindy Project is well, not surprisingly, Mindy. Now, that’s not to say supporting characters like Danny and Morgan don’t bring something to the table — they do. Most of the time, though, what makes these characters so lovable rests in their chemistry with the show’s head girl. So, when this week’s episode followed Danny and Morgan as they drove across the country to visit Danny’s father in California, I was left feeling a little uneasy. Where's Mindy, yo?

There are moments of Mindy in the beginning, and we can feel her wit and presence being weaved throughout the episode, but, ultimately, an episode without Mindy doesn’t feel so much like an episode of The Mindy Project at all. Whether or not this means the show will play around with narratives that don't include her, or that the show's trying to create a more ensemble type cast with equal distribution among its characters, I'm not sure. However, when I think about it, that might not necessarily be a bad thing overall.

Although this last episode might have not been a home run for me — it was a little lackluster, and a little too predictable on top of not including much of Mindy — at least The Mindy Project has proven that it's not afraid to switch things up. However, some fans might see this as something alarming, or indicative of a show that will stray too far from the one we've known. But if we've learned anything about Mindy in the three seasons prior, it's that she stays true to her self, always. And, if we've learned anything about Kaling in the years before The Mindy Project, it's that we can trust her to provide us with quality entertainment.

At Saturday's PanelFest, the shows creator, Kaling, discussed the show's inevitable alterations. "I will say that being on Hulu allowed us to make the show that we really wanted to make. And that’s kind of amazing; in Season 4 to be able to say things like, ‘t–s deeps in a margarita,’ – which, you know I’ve wanted to say for years.” Although she makes a joke of it — a hilarious, totally appropriate Kaling joke — the idea of censorship is one to consider for the evolving show. The show's not being censored in both dialogue and plot line for primetime. If Mindy wants to make an episode that doesn't feature her, Mindy can do just that. Fans will just have to sit back and enjoy the ride — road trips and all.