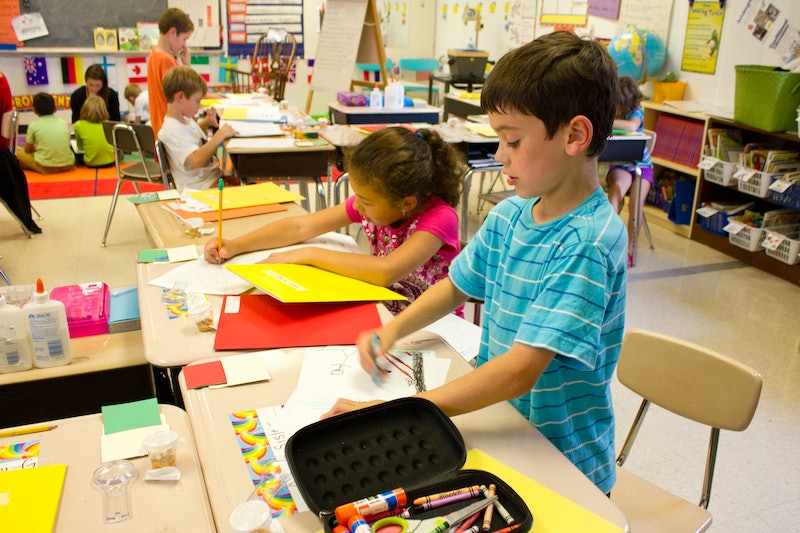 Schoolkids in San Rafael, California are poised to become a whole lot healthier this year. At least, that's the aim of one school's latest initiative. Vallecity Elementary School students are getting standing desks in their classrooms, making the school the first in the nation to phase out standard desks completely. Vallecity has already converted 19 of its 22 classrooms, and plans to be fully converted by the end of the year. And so far, the kids are loving the change. "It burns off a lot of my energy so I can concentrate without wiggling in the chairs," says student Meadow McPherson. The school does provide stools in case kids get tired, but most prefer to stand, manipulating the attached "fidget bar" with their feet to stay active. Principal Tracy Smith also added that while it took a few months for students to get used to the new concept, they're now more focused, confident, and productive than ever.

The program itself was started by parents Juliet and Kelly Starrett. Kelly, a physical therapist, noticed a trend of orthopedic problems in his practice caused by sedentary lifestyles — a.k.a. sitting too much. When the Starretts volunteered at their daughter's school for a field day, they recognized the hallmarks of sedentary lifestyles in her classmates. Many children were overweight or lacked a range of motion. A year later, in June 2014, Juliet founded Standup Kids, whose mission is to convert all public schools to standing desks within ten years.

According to the CDC, 17 percent of U.S. kids are obese. Sadly, that predisposes them to a whole host of other health-related issues. Obese children are more likely to have high cholesterol, high blood pressure, joint problems, and sleep apnea, and are at a greater chance of being pre-diabetic. They're also more likely to become obese adults, and thus more at risk for heart disease, type-2 diabetes, stroke, cancer, and osteoarthritis.

Using a standing desk can help students at a healthy weight burn between 15 and 25 percent more calories, according to Standup Kids, while obese kids will burn between 25 and 35 percent more calories. The organization also claims that standing desks can prevent "orthopedic degradation and dysfunction including back and neck pain, repetitive stress injuries, pelvic floor dysfunction, and knee and hip disorders."

Another group that could benefit from the program big time is children with ADHD. According to the National Education association, kids need to move in order to focus, particularly those with ADHD. A 2008 study found that kids fidgeted more when they were tasked with storing and processing information, which explains why kids get the wiggles during math class but can sit perfectly still while watching TV at home.

Standup Kids has partnered with DonorsChoose.org in the hope of raising one million dollars to create a fund for teachers looking to outfit their classrooms with standing desks. So far, they've raised almost $150,000, though the ultimate goal is to obtain federal funding for standing desks. The hope, says Juliet, is that when a new school is built, standing desks will become the new norm. (Can somebody get Michelle Obama on this?)

More like this
What To Know About Martin Bashir After Watching 'The Crown'
By Bustle UK
These Are The Best Supplements For Runners
By Carolyn Steber
Hailey Bieber Has A "Painful" Ovarian Cyst "The Size Of An Apple"
By Radhika Menon
The Best Lat Exercises With Dumbbells, According To Trainers
By Carolyn Steber
Get Even More From Bustle — Sign Up For The Newsletter