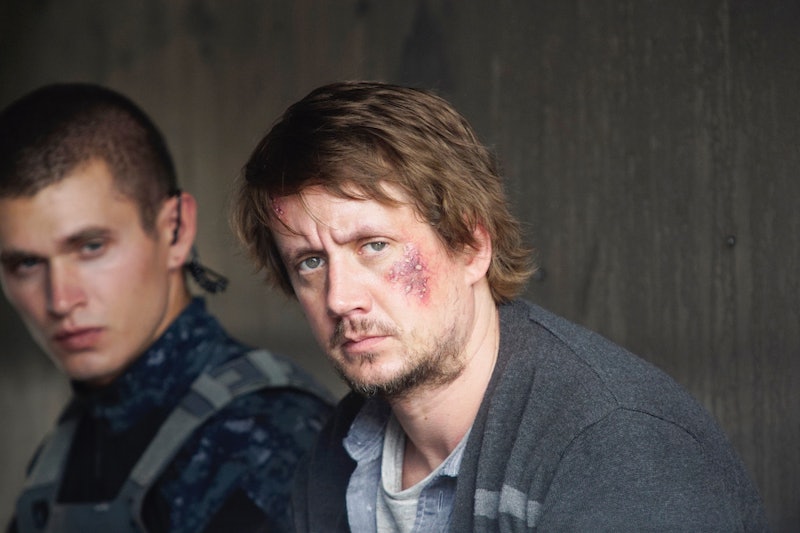 Now that we've entered the Inhumans chapter of Agents of S.H.I.E.L.D., there are exciting new super-powered people everywhere, and this week we're set to meet someone new. Dwight Frye joins Agents of S.H.I.E.L.D. in "Devils You Know," which raises a few questions. First, who exactly is S.H.I.E.L.D.'s latest addition? Could he end up being a part of Daisy's new Secret Warriors team? Or will he go up against his fellow Inhuman?

Though S.H.I.E.L.D. fans will meet him for the first time on Tuesday night, the Marvel Universe does offer some insights to Dwight. In Marvel Comics, he's a super-powered individual who also goes by the name Bazooka and is part of a group called the Black Powers. His powers? Well, he can blast people with his hands (which is admittedly, pretty darn cool). In the comics, he's not an Inhuman (he got his paranormal powers from something called "The White Event"), but I think it's safe to infer that in this particular facet of the Marvel Universe, his powers will be of the terrigenesis variety. Now, can he be counted as a friend? A foe? Is he from the ATCU? Or Hydra?

Well, unfortunately for our well-loved S.H.I.E.L.D. team, it's looking quite likely that he's (yet another) villain set up against them. The promo for "Devils You Know" showcases ATCU head Rosalind Price going head to head with the man. She tells Dwight, "You're the brains of the operation, and your pitbull does all the killing." So, unless the promo is being intentionally misleading, it would seem that Dwight Frye is somehow affiliated with the Inhuman vigilante, Lash.

That said, the promo also displays Lash and Dwight at odds — its end finds Lash with Dwight by the throat, threatening him and asking him, "What did you tell them?" So perhaps Rosalind's summation that Dwight was the brains behind Lash's operation were less than accurate. All we know for sure is that the two of them are connected; the nature of their relationship has yet to be determined. It's worth pointing out that their powers are a bit similar, as both of them can blast people using their hands — though, like their friendship/foeship, the reasoning behind their similar powers is still unclear.

Now, we know that Lash isn't affiliated with the ATCU — after all, Rosalind Price was just as baffled by his trail of dead bodies as Coulson was — but could he and Dwight be working with Hydra? It would seem that Ward would, at the very least, be interested in recruiting the two of them, given their dangerous powers (and Lash's trademark ruthlessness). Plus, a separate preview clip reveals that Hunter is slowly moving up the Hydra ranks — so it's also a possibility that the two of them are playing for the other-other team, as super-powered Hydra agents (which would definitely be bad news for Agents May and Hunter).

We don't have a lot of answers yet, but we know that "Devils You Know" will largely focus on the hunt for Lash, so we'll definitely get to see him and Dwight in action. Hopefully, we can unravel their mystery a bit by the end of the episode.