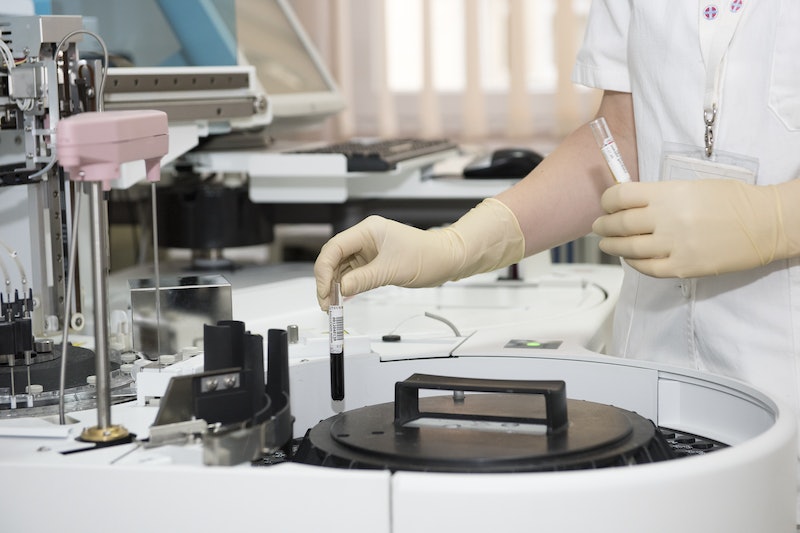 Would you agree with me if I said that gender bias in STEM fields exists? If you're a man, you might not — because according to a new study, a lot of men in STEM don't believe that sexism is really happening in their field. Research published in the Proceedings of the National Academy of Science found that when both men and women were presented with academic findings of gender bias in STEM fields, men were a lot less likely to take the findings seriously. Yep — even when men are shown clear, scientific evidence that sexism in STEM is a real problem, they're still not buying it.

By the way, gender bias in STEM is without a doubt, verifiable. "Ever-growing empirical evidence documents a gender bias against women and their research — and favoring men — in science, technology, engineering, and mathematics (STEM) fields," the researchers, who hail from Montana State University, the University of North Florida, and Skidmore College, wrote in the introduction of their report. It's also an extremely male-dominated field; the researchers noted the field of employees to be "homogeneously" men, with one such example being that men make up 71 percent of STEM faculty at colleges in the United States.

For their research, the team conducted three experiments. In the first two, the participants — men and women who included faculty members in STEM fields, faculty members in non-STEM fields, and members of the population at large — were asked to read an abstract presenting evidence of gender bias in STEM as a real phenomenon from a peer-reviewed journal online, complete with citations. Then, they were asked to rate their level of agreement with the results presented in the abstract, rate the research's level of importance, and give feedback on the quality level of the abstract. From there, the researchers conducted a statistical analysis of their data in an effort to find any correlations or statistical significance between the gender of the evaluator and their overall viewpoint of the abstract.

In both experiments, men were less likely to view the abstracts favorably than women were. There was also a significant finding among those faculty members who were working in STEM fields, with male STEM faculty being a lot less inclined to believe that empirical evidence showed women were experiencing sexism in STEM. In fact, there was a huge gender gap here: Female STEM faculty members were most likely to view the results of abstracts they read favorably, while the men viewed them from a hostile perspective.

OK, so a couple of things to point out here: First, the findings suggest that men are less likely to believe scientific evidence about gender bias in STEM, but also that women are more likely to use confirmation bias in believing that there is a gender bas in STEM. It's troubling, however, that men were less likely to believe the legit, absolutely real data supporting the fact that gender bias exists in STEM.

The researchers are hoping that their findings will help others to recognize the real gender bias in STEM — and hold themselves more accountable for changing it. "We hope that our findings help inform and fuel self-correction efforts within STEM to reduce this bias, bolster objectivity, and diversify STEM workforces. After all, the success of these efforts can translate into greater STEM discovery, education, and achievement," they wrote in their conclusion. And they're absolutely right: We need to recognize the real barriers women are facing in STEM if we ever hope to correct it.