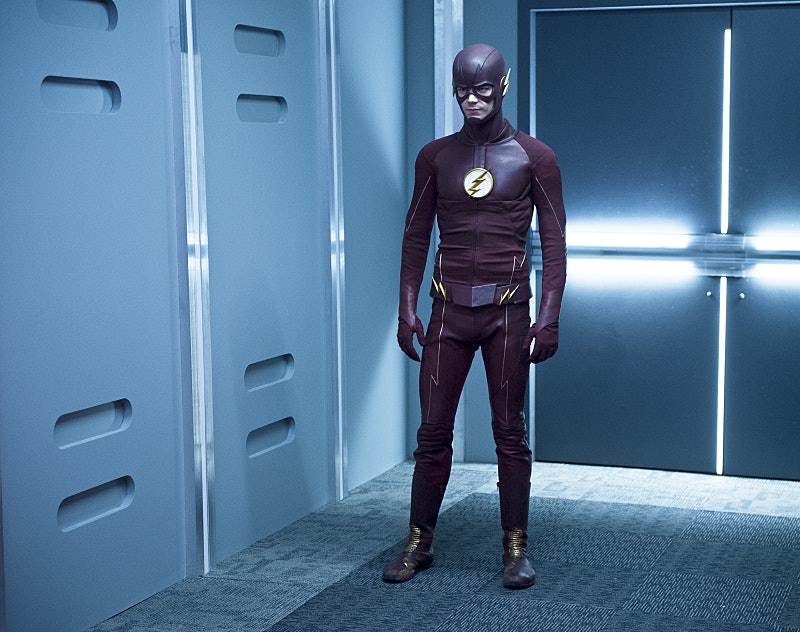 Stop what you're doing, because Harrison Wells is alive on The Flash . Actually, that's only half true. Harrison Wells is only alive in Earth 2, the parallel universe discovered when Barry Allen created the singularity over Central City and opened up a wormhole-like portal to this other dimension. People can travel through this wormhole to the other worlds, but right now, it's very unstable. When Barry tries to go through, it throws him right back out. However, at the end of this week's episode, Harrison Wells came to Earth 1 through the portal, jumping through and landing right on his feet in S.T.A.R. Labs.

What's the proper response when your mentor actually turns out to be dead, and his appearance is taken over by a speedester from the future who is out to kill you, and then he dies, but then comes back to life via Earth 2? How does someone react to that? Just asking for a friend.

Regardless, we're going to find out. At the end of "Family of Rouges," Jay Garrick — a Flash in his own right — has completely stabilized this portal, and nicknamed it the "Speed Cannon." To test it out, Dr. Stein throws an object into it, and it doesn't come back. That's because it's landed on Earth 2. It was either a really good idea to do that, or a really bad idea. I'm going with "bad," because now Earth 1 has shown itself and Earth 2 realizes that there's a working portal "hallway" that they can travel through. First one up: Wells.

But what is he doing here? Barry and Co. just learned about Earth 2's existence, so has Harrison Wells known about this all along? What is he here for? I've got a really big suspicion that he and Jay are somehow connected together. Jay almost headed back to Earth 2 during the episode, but Caitlin talked him into staying. Now I feel as if Wells knows Jay stayed behind, and he's here to bring him back.

There are still so many unanswered questions for The Flash Season 2 to delve into, but one thing is certain: WELLS. IS. BACK.