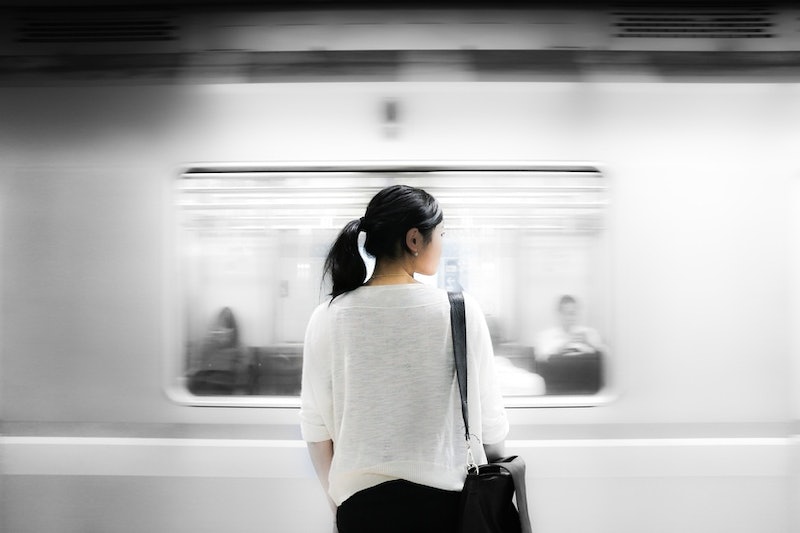 Hearing the word "no" is not an easy thing to swallow, and taking rejection gracefully is a hard move to master. When we try really hard for something only to come nose to nose with a solid wall, blocking us from our happiness, it can be tempting to give up and slink back home. And the emotions that comes with that sting are just the worst — embarrassment, disappointment, a heavy heart, and bruised ego. You take it personally and begin to think the world didn't hand you your request because there's something wrong with you — you're just not good enough. But that's a silly way to think. That's nothing more than a pity party, and rejection actually isn't all that bad. It's just a slightly annoying part of life, like filling out taxes or having to fold laundry. It's not something you like to do, but you just have to grit your teeth and power through it. Rejection is just the same thing.

Sylvia Plath said, “I love my rejection slips. They show me I try.” And that's exactly what rejection is: Proof that you tried, that you were brave, and that you went out there and did something worthwhile with your time. Below are seven tips on how to take rejection gracefully — before you know it, hearing the word "no" won't hurt your feelings like it used to.

1. Decide What You Want Matters More Than A Scuffed Ego

It's never fun getting rejected — it's hard not to begin to assume that the reason for it has to do with you not being good enough, and it begins to chip away at your ego. But while it could be tempting to hunch your shoulders and go back home to lick your wounds, you have to decide what you're asking for is worth more than your ego. If it is, keep putting yourself out there.

Writer Kara Gebhart Uhl points out in career-advice blog The Creative Group, "To be told 'no' means you're saying 'yes' to putting your work out there. A surefire way of never receiving a rejection is to never submit anything. To never push the limit on a design. To never take a chance on a new market. Stephen King's Carrie was rejected 30 times. William Golding's Lord of the Flies ­– 20." So the next time you get denied, remember why you're putting yourself out there to begin with. Chances are it's for an amazing reason, and it deserves for you to keep on trying.

2. Remember, It's All A Numbers Game

While we'd all love to get a "yes" on our first try — whether if it's for a job, a pitch, or a date — but the real life facts are that it just doesn't shake out that way most of the time. Next time you get denied, remember that it's a numbers game. It usually takes a lot of asks to get the result you want, so don't stop asking. Your chance is out there, you just have to get to it.

According to journalist Katie Pisa at CNN, "Sometimes the most far-fetched idea gets a yes. If you talk to enough people, somebody will say yes to you. J.K. Rowling went through 12 rejections to get her yes for Harry Potter and the Philosopher's Stone." If it took Harry 12 times to be recognized as the best character ever created, then there's hope for us all. Keep trying, chances are you're almost there.

3. Make A List Of All The Other Times You've Been Rejected

Other times you've tried as many times as you could and the answer is just a solid no. While that never feels great, there's a way you can take that rejection gracefully and use it as a tool. Rather than having a mini pity party, create a list of all the other times you've been denied and prove to yourself that you've fallen before, and you got back up.

According to Rachel Perkins, writer at career blog Creative Live Blog, "Since I was a kid, my mom has encouraged me to periodically make a list of times that I failed and everything still turned out OK. These lists serve as a constructive way to keep myself from falling down a rabbit hole of my own failures, but also an interesting tool to learn from these missteps. Sometimes, in retrospect, you can see that a certain rejection opened the door for something else. It’s all about perspective!"

Not only do you have the strength to keep on going after a rejection, but you have the proof that sometimes a "no" is for the best. You never know what new path that closed door could lead you.

4. Remember That You'll Never Be Able To Avoid It

Next time you feel sad over having tried and failed, just remember that it's part of the game. To try is to fail; it's a rare feat to succeed on your first go. So don't feel like your confidence took a hit over it, because it's all part of the process. Gebhart Uhl quotes author Anita Shreve to make her case, "To ward off a feeling of failure, she joked that she could wallpaper her bathroom with rejection slips, which she chose not to see as messages to stop, but rather as tickets to the game."

Receiving a rejection is like receiving one persons opinion — it doesn't mean you should stop. So take it in stride and keep in mind that it's just part of the rules of trying.

5. Use It As A Chance To Prove Everyone Wrong

Sometimes you get a "no" when you very well know it should be a "yes." You walk out of that room thinking the person just made a big mistake, and chances are you're completely right. So use that trust in your abilities and ambitions as motivation to prove all the naysayers wrong.

According to Christy O'Shoney, writer at self-development blog Nectar Collective, "The truth is this: there are people who will reject you with little understanding of what you are capable of. When this happens, rejection should become fuel for you. Use it to energize and propel you to work harder towards your ambitions. How good will it feel to do the very thing that you were told you could not do?" The only time you truly fail is if you stop — if you keep going, you'll eventually hit your goals!

6. Keep In Mind It Can Lead You To Something Better

When you have a dream in mind, it can be a hard pill to swallow that you have to alter it to accommodate decisions that you have no control over. People stand in our way all the time, whether that's bosses, family, or significant others. But as you're forced to tweak your dream, keep in mind sometimes it's for the best. You never know where one closed door could lead you.

O'Shoney points out, "The reason that rejection feels so personal is because it stands against our expectations. On some level, we feel that we know exactly what we need to succeed and be happy in this world, and when that desire isn’t met, it can be crushing. But what we often fail to realize is that there is a world out there with a multitude of possibilities."

Maybe you didn't get that one job you were aiming for. The drive back home is going to be a bitter one, but at that moment you have no idea what other possibilities opened up because you won't be spending your time in that particular office. Maybe an even better position is just two weeks away from being found by you. With that "no" you're now propelled in a whole different direction, and there are some exciting things waiting for you there. Because just as a rule, there always are.

There's always a reason why the rejector decided to bet against us, and sometimes it's for a good point. You can either slink off and lick your wounds, or you can take this as a learning opportunity and see how what you could have done differently.

According to Pisa, "When you get rejected you have to find out why. Then spend time to find solutions to solve that why. Sometimes through this process you learn there is something else you can ask for. [Like] ask for an intermediate position rather than the top position."

Rejection sometimes means that the thing you're attempting isn’t something you're ready for just yet. Which is totally okay. Take it as a chance to figure out what you need to do to grow and create a game plan to achieve it. You can always try again later!