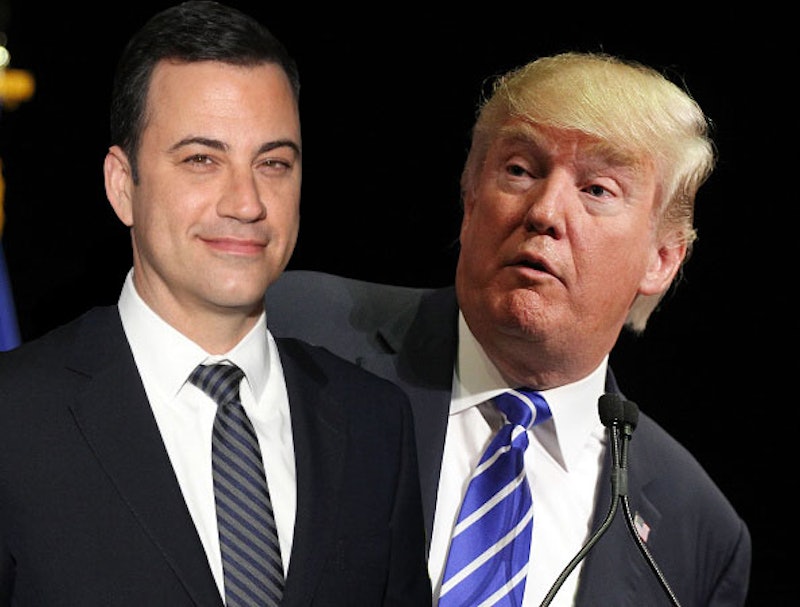 Donald Trump has never shied away from the spotlight, which is what made his last-minute cancellation for an appearance on Jimmy Kimmel Live! all that more surprising. The Trump team said the Republican presidential candidate had a political engagement he could not pass on, and the big man himself is expected to make up the appearance in a couple weeks. But no matter the reason, as expected, Jimmy Kimmel ripped Trump on Tuesday in a flurry of jokes that only makes you wonder how the eventual interview will actually go down.

During his opening monologue, Kimmel ruminated on what could have possibility forced Trump to break from his plans.

You know Donald Trump was supposed to be here tonight. ... Last night, his people called and canceled on us. They were a little bit cryptic about why he canceled. They said, "He has a major political commitment, but he did want me to relay the message to you that if he was here, he would have been great."

I'm dying to know what this major political commitment was. Usually it means he had to go on CNN and call someone an idiot or something.

Why did he cancel? We told him there were cameras here, right?

Are Tuesday nights the night he volunteers down at the orphanage?

But don't worry, tonight we're gonna give everyone in the audience a basketball dipped in cologne so you can fully experience what it would have been like had Donald Trump been here.

I will say, the good part about Donald Trump not being here is we don't have to build a wall around Guillermo tonight.

Despite bailing on Kimmel, who's shooting his show from Brooklyn this week, Trump did manage to sit down with Fox News just after hours he was supposed to do his late-night appearance, according to Politico. Trump told host Sean Hannity he would come through on the rain check. "I have a big political event which I can't skip," Trump said. "And I told [Kimmel], I said, you know I have this event, I can't skip it, but I will be doing it in two weeks once I am out in Los Angeles."

Whatever the reason, it didn't spare The Donald from a barrage of insults — all in good fun, I'm sure — especially considering Trump's Kimmel appearance wasn't going to be your typical interview. In fact, Kimmel told CNN on Monday that he would not be interviewing the candidate and "it'll all make perfect sense when you see it."

Here's hoping that whatever Kimmel had up his sleeve will be played out in a couple weeks when Trump shows up in Los Angeles. Because when that time comes, you can bet Trump will have some choice words for the comedian.

More like this
'Waterloo Road' Is Back, With More Than A Few Familiar Faces
By Sam Ramsden and Vivian Iroanya
Matt Hancock Broke a Major Rule With I’m A Celeb
By El Hunt
Kim Cattrall Had A 'Sex And The City' Reunion With Creator Darren Star
By Grace Wehniainen
Mindy Kaling Explains Why 'The Office' Would Be "Inappropriate" Today
By Jake Viswanath
Get Even More From Bustle — Sign Up For The Newsletter