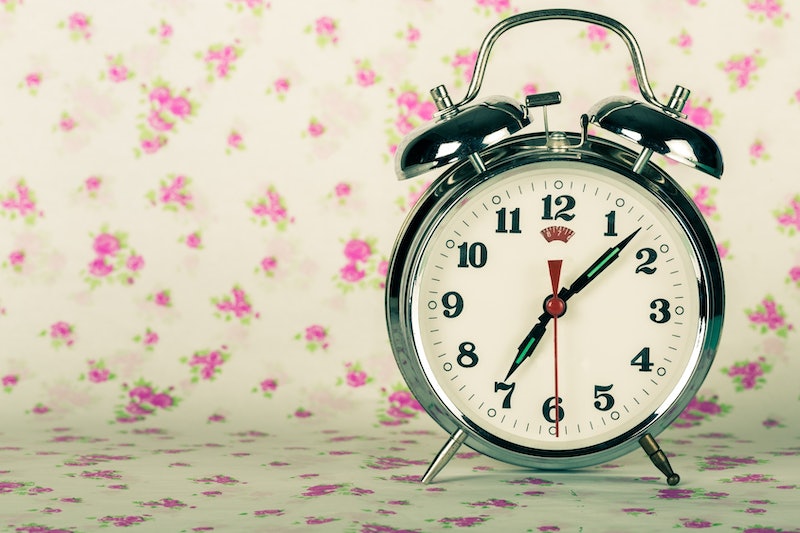 John Oliver said it best about Daylight Saving Time when he asked, "How is this still a thing?" Come Nov. 1 ― aka when everyone will still be out celebrating Halloween ― millions of Americans will be confused about the time once again. The practice will have us "falling back," giving us an extra hour on that day. While many prefer this to "springing forward," setting the clock back has the major downside of our days descending into darkness before we even start our commute home. And that's just depressing. But what most people don't know is that there are legitimately scary facts related to Daylight Saving Time. And I'm not just talking about the fact that it ends on Halloween this year.

This year, the first Sunday of November happens to be the first of the month, giving Halloween partiers an extra hour to raise hell. In the spirit of the Halloween-DST hybrid, here are seven truly terrifying facts about Daylight Saving Time which you probably didn't know. Luckily, most of these pertain to springing forward.

DST Leads To An Increase In Suicides

The change-up in your circadian rhythm caused by Daylight Saving Time can have some serious effects on your health, which can include your susceptibility to suicide. An Australian study found that small changes in sleep patterns can destabilize individuals with bipolar disorder, and led to an increase in suicide among males after DST.

DST Is Also Correlated To A Spike In Heart Attacks

Another major health effect that has been associated with DST is a rise in heart attacks. Researchers in Michigan found that between 2010 and 2013, hospitals saw a 25 percent increase in heart attack patients on the Monday following DST. According to lead author Dr. Amneet Sandhu, those who are already at risk of heart attack become much more vulnerable after sudden sleep changes or the loss of sleep.

What else could a lack of sleep affect? Yup, your morning commute. Researchers at the University of Colorado at Boulder found a rise in fatal car accidents in the first six days after DST, when people are still adjusting to the new sleep schedule.

The same grogginess which leads to car accidents can also be attributed to the increased workplace injuries that occur after DST. A 2009 study confirmed this increase, and also found that the nature of the injuries were more severe after changing clocks.

Not To Mention Other Kinds Of Accidents

If DST leads to more accidents on the road and at the workplace, then imagine what could happen in the airline industry. Or in surgery rooms.

And Utter Chaos In General

Researchers have found that DST can lead to instability in the stock market, due to anxiety caused by many sleep-deprived minds. In fact, DST can cost the country billions of dollars a year because of disruptions to stocks and industry.

The Candy Industry Takes Advantage (At The Expense Of Your Children)

While most of these facts have had to do with DST in the springtime, this latest tidbit relates to falling back in autumn. According to Michael Downing, author of Spring Forward: The Annual Madness of Daylight Saving Time, DST was extended to end after Halloween so that the candy industry could make more money off of children trick-or-treating for an extra hour. The idea that DST could be contributing to the high rate of childhood obesity in the U.S. is truly terrifying.