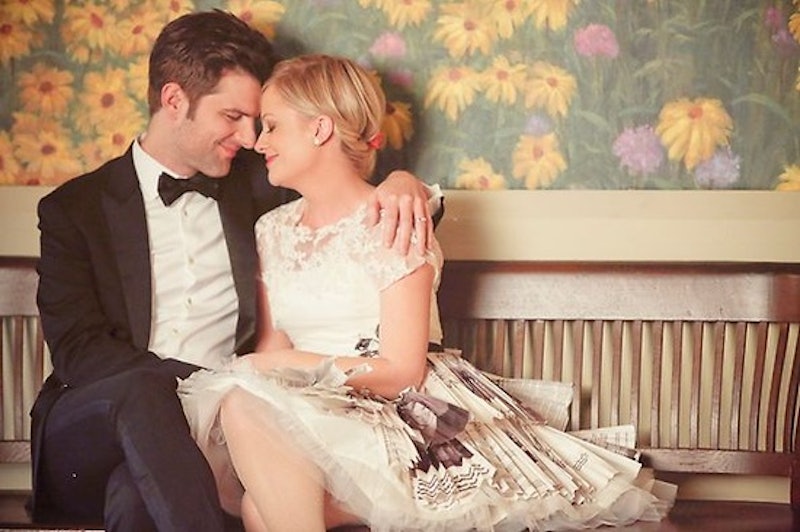 In 2011, Americans spent an average of $27,021 on their weddings, according to a survey conducted in 2012 by wedding website The Knot. After wedding spending went on the decline from 2009 through 2011, it's now inching its way back up to an obscene level.

From the flowers, to the dress, to the party favors, to the centerpieces, weddings are just one big money drain. But maybe that's because there is so much pressure to go exactly by the official wedding playbook and check everything off your list. Do you have to have an engagement party? Does the rehearsal dinner have to be fancy? Do you have to have the bridesmaids in matching dresses (please, God, no)? Does the cake need to cost more than your mortgage? The answer is no. Though weddings are still bigger than ever, there is a lot more freedom in how you spend your money on this big day. Here are some wedding rules you don't have to adhere to if you'd rather not.

Yes, many of us want a wedding cake that is so beautiful that people don't even want to eat it (did you see Kaley Cuoco's upside down chandelier cake? How would one even go about that?) but as we learned from Steve Martin in Father of the Bride "A cake, Frank, is flour and water," and therefore should not cost thousands of dollars.

First of all, half the people don't even eat it. Bay Area wedding planner Erica Ota told CNN.com, "Typically, most people spend between $700 to $1,000, yet I find that only 60% of guests even take a slice. Factor in a $2.50 per person cake cutting fee and you're looking at an expensive dessert," she says. Why not get cupcakes or a store-bought cake that you dress up with a professional?

You just gave your friends and family a huge dinner and party that may or may not have included an awesome '90s cover band. You have to give these people gifts too? Denise Oliveira, who writes about weddings and love stories for The New York Times, told Bustle that wedding favors can end up being a larger-than-necessary portion of the budget. A great alternative is to provide mini boxes or plastic bags for guests to take home items from the dessert buffet. Everybody wins with leftovers.

First of all, you can't see anyone at your table with those damn things in the way so might as well just get rid of them. Oliveira said she is seeing couples and florists "turn away from having the exact same centerpiece on each table. Last year, most weddings had a variety of smaller vases, with some tables having larger vases and each table having a different set of vases and flowers, within the same color and stylistic theme."

Maybe you love Downton Abbey and wish we all still wrote long letters in perfect penmanship. But maybe you also love trees. An elaborate, engraved wedding invitation is super expensive and wastes a lot of paper. Wedding and relationship expert April Masini told Bustle, "While paper invites are more expensive, and definitely better etiquette, engraved invitations are no longer expected. Cheaper printing is fine. And in many cases — especially with second, third or fourth marriages — evites have become standard." By the fourth one, I don't think you even need an invitation. Just tell your friends you're having that party you throw every few years.

5. The bride's family pays for everything

Tell your parents the good news (especially if you are one of two or more sisters). The groom's family can now throw in some cash too. Traditionally, the groom's family paid for the rehearsal dinner, travel and accommodations for their side of the family, the honeymoon, and their gift for the bride and the groom. The bride's family pretty much took care of everything else. It depends on the family, but today's rules are more lax about paying the bill. The groom's family can offer to pay for more, or the bride and groom can foot the bill — which may give them more control over what kind of wedding they want.

6. The wedding dress has to be white

It used to be a sin to not wear white to your wedding but today, man, anything goes. In fact, pink is the hot color for weddings this year — Kaley Cuoco wore it on her New Year's Eve wedding. Says Refinery29: "Not into white? You're in luck — pink is a huge trend these days, and a blush-hued dress on your wedding day is one of the few times when you can wear pink and feel automatically subversive!" You can also wear black like actress Shenae Grimes or make a cool DIY newspaper dress like Leslie Knope on Parks and Recreation. Or you can even wear pants. Hey, it is your day!

Just like the invitations, this is an easy place to save on costs and paper. Printed programs look absolutely lovely, but half the time people don't even remember to take them along at the end of the ceremony. And everyone should know what wedding they are at without having a program to fill them in.

So, maybe you'll have to cut the Wilson Phillips performance out of your budget, but that doesn't mean you won't have a killer day.