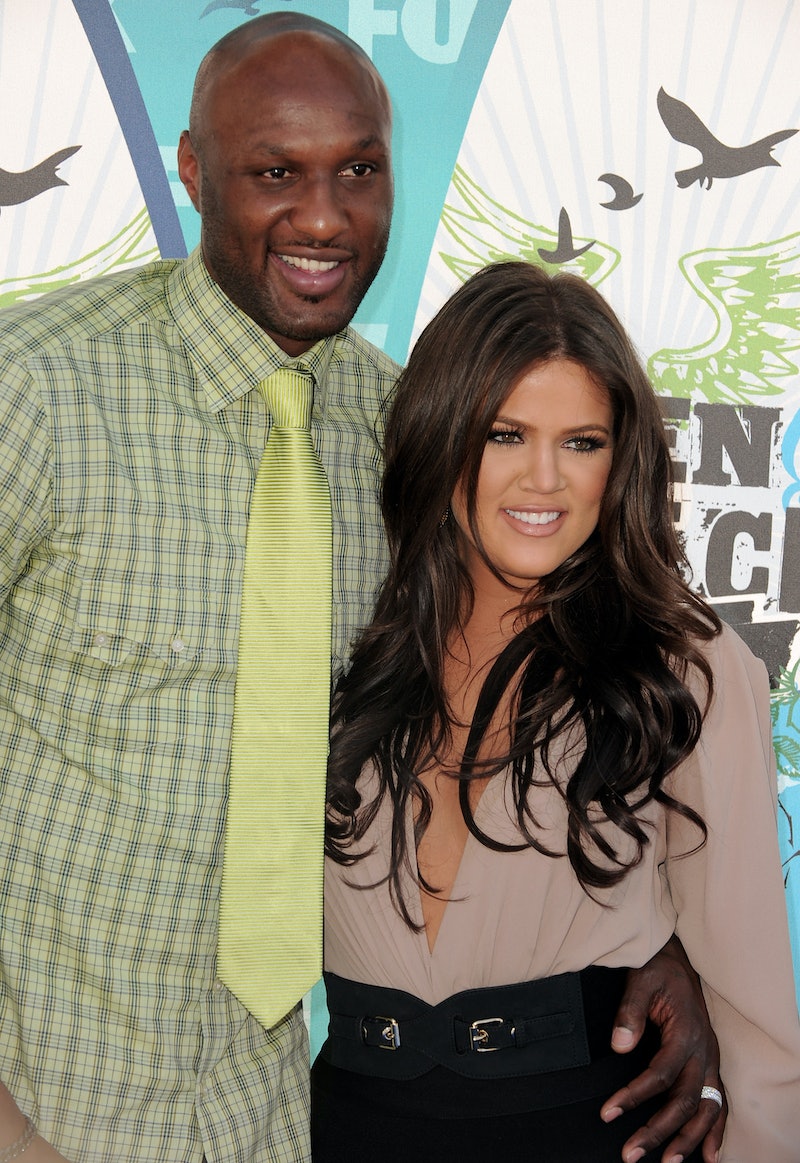 Only eight days ago, Lamar Odom was found unconscious in a brothel in Las Vegas and hospitalized. In the time since, Odom's health has improved by leaps and bounds, and on Monday he was moved to a Los Angeles medical facility to continue his recovery. The news of Odom's hospitalization was shocking and scary, but he's now making headlines for another surprising reason. Reportedly, Lamar Odom and Khloé Kardashian have called off their divorce, which was reportedly not yet finalized by a judge. Since it seems like they might be considering giving marriage another go, I can't help but look to the past and wonder how Kardashian and Odom met in the first place?

Bustle has reached out to reps for Kardashian and Odom about the reports that they called of their divorce, but has not yet heard back.

The former couple's relationship began back in August 2009, when the reality star and NBA player were both in attendance at a welcome to the Lakers party for Metta World Peace in Hollywood. When they first met, Kardashian didn't exactly have butterflies, though. In an interview with iVillage in 2001, Kardashian shared,

The first time I met Lamar, I wasn't that down for him. It was typical — I was in a nightclub, he was a basketball player ... I wasn't down for that whole... thing.

She explained in the same interview that eventually, once she got to know him, that Odom's heart and his smile attracted her.

Just a short time after getting together, Kardashian's sister Kim confirmed the relationship to People , saying, "They're very, very happy... They've been together a few weeks, and are literally inseparable. Khloé thinks he's amazing and makes her laugh and smile constantly."

Just a few weeks after meeting, the couple was engaged and were soon after married on Sept, 27, 2009. In 2011, they began starring in their Keeping Up With the Kardashians spin-off, Khloé & Lamar, which ran for two seasons. In December 2013, Kardashian filed for divorce from Odom after four years of marriage.

Since then, Kardashian has been open in sharing her feelings for her ex, and it's apparent that their love was deep, regardless of the circumstance. She told E! News in April of this year, "I will never ever not love Lamar... I was so obsessed with him in a healthy way. He was my husband, and I still wish he was, and I don't think there's anything wrong with that."

In the September 2015 issue of Women's Health, she further expanded on her love, saying, “I love Lamar to death. He is the love of my life. We had a fantastic marriage. Do I wish he had tried harder? Yes. Do I think that he maybe didn’t have the energy to fight because he was fighting so many other things? Yeah.”

Obviously, going through an event like the one Odom has gone through is going to give you a new perspective on life in one way or another. Whether this means he and Kardashian will get back together and rekindle a romantic relationship, only time will tell.