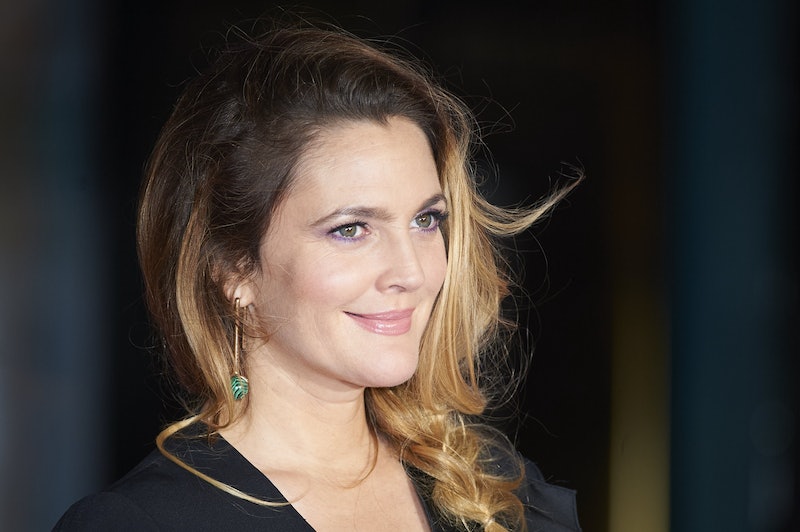 Being a mom is one freakin' tough job, whether you're a total newbie at it or a veteran. So imagine trying to navigate this new terrain when something inside just doesn't feel right. When you can't eat, can't sleep, and can't stop crying. When medically-speaking, you need help. That's the reality thousands of women face every year while mothering through postpartum depression, or any perinatal mood disorder, and celebs are no exception. Earlier today, Drew Barrymore revealed her own experience with postpartum depression in a candid interview with People magazine. In doing so, she is helping bring to light an issue that affects nearly 15 percent of new moms every year, according to the CDC.

While Barrymore has two children — Olive, who is three, and Frankie, now 18 months — she said she only experienced postpartum depression with her second. And it hit her like a ton of bricks. As Barrymore shared:

I didn’t have postpartum the first time so I didn’t understand it because I was like, "I feel great!" The second time, I was like, "Oh, whoa, I see what people talk about now. I understand"... it’s a different type of overwhelming with the second. I really got under the cloud.

While Barrymore describes her own postpartum experience as "short-lived," lasting about six months, it had an undeniable impact on the way she lives her life. As she told People, the experience taught her to live in the moment, no matter what. She continued:

It’s really important. I was in the kids’ class with Frankie and Olive this morning and I started fretting about some piece of work news that was just stressful. You know, in like the Broadway Babies class and it’s the one-hit wonders day, and they’re singing I don’t even know what song, and we’re all doing our lollipop drums and I just thought, "Save it until after class." One thing at a time.

Barrymore isn't the first celebrity to make headlines for sharing her struggles with PPD. Ten years ago, Brooke Shields chronicled her experience in the memoir Down Came The Rain. Reality star Kendra Wilkinson also opened up about feelings of depression after having her son Hank in 2012. And just last week, Hayden Panettiere entered treatment for her postpartum depression, and the Internet has been afire every since.

And I would know. I struggled with postpartum depression for a full year after my daughter's birth. I became overly emotional, which, for this stoic, non-crying type was a red flag. (Like seriously, I was crying three, four and five times a day.) I stopped eating normally, I wasn't sleeping regularly, and I was angry. All. The. Time.

But I didn't think anything of it. I just assumed I was having a hard time adjusting to motherhood. I thought if I kept trudging forward, things would get better; I would get better. I thought I was just a bad mom. When the suicidal thoughts started four months later, I knew something was wrong — very, very wrong. Even so, I felt like I had to be strong, to keep it a secret, and so I struggled alone. For six long months I struggled alone. But no one should have to, and the truth is, we don't have to.

Postpartum mood disorders, which include postpartum anxiety/OCD, postpartum psychosis, and the most frequently discussed perinatal mood disorder, postpartum depression, affect approximately 10 to 15 percent of all new moms. (To put things in perspective, that means 1 in 7 women will experience some type of postpartum disorder.) While symptoms vary widely — ranging from difficulties sleeping and eating to sadness, rage, constant worrying, intrusive "what if" thoughts, hallucinations, paranoia, and panic attacks — they are all normal. You are normal. But they are also signs you may need help. If any of these symptoms appear after birth and persist two weeks or more, or even if you simply experience a feeling you just can't shake, don't ignore it. Tell someone — a friend, a loved one, a colleague, or your doctor — and get help. You are worth it.