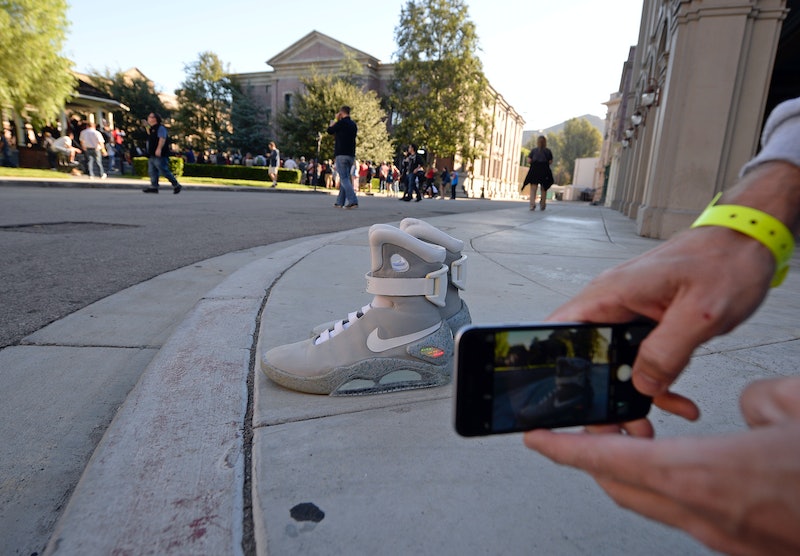 Remember the days when Velcro was the coolest thing to hit the sneaker industry? Well, with the shoes from Back To The Future may soon become a reality thanks to Nike releasing self-tying sneakers. Your slip-on shoe situation just got even easier. Nike has been teasing us with plans to introduce the sneaks to the market in Spring 2016, and on Wednesday, the shoe brand announced that there is in fact an IRL pair in NYC right now, as reported by ABC News. Although the self-tying shoe concept was first introduced in the iconic film in 1985, it wasn't until 2009 that Nike first filed a patent for the "Automatic Lacing System," according to the outlet. Wonder what took them so long?

The following year, an amateur inventor introduced her own take on self-tightening shoes with a Kickstarter campaign. She claims that it uses a different mechanism than the Nike iteration and so far, there has been no conflict with the Nike patent.

It's no coincidence that the American shoe brand has the honor of being the first mainstream label to release these babies; the original prototype in the movie, though digitally enhanced, were based on Nike Air 2015 kicks. (If you need reminding, the original movie mostly took place 30 years in the future — 2015).

Michael J. Fox, one of the movies original stars, received a pair on Wednesday, adding to the excitement of the eventual public launch of the shoes. This isn't the first time Fox and Nike have worked together, though. Back in 2011, Nike donated $4.7 million in proceeds from its eBay auction of 1,500 pairs of non-self tying replicas to the Michael J. Fox Foundation for Parkinson's research, according to the foundation's website.

These independent shoes aren't the only super high-tech sneakers to hit the market lately. Here are a few other insane shoes that prove that the future is now.

1. No Place Like Home GPS Shoes by Dominic Wilcox

These are so much more chic than holding an iPhone out while trying to figure out which way to walk down the block. First brought to life in 2012 using leather, a micro-processor, GPS, and LED lights, these babies will help you find your way home, and look pretty good, to boot. According to the GPS shoes' website, "the left shoe points in the desired direction, the right shoe acts as a progress bar."

Now if only they made these in ruby red.

For one of its new cleat designs in early 2014, Nike simply hit "Print." Even though it happened over a year ago, it's still being talked about in the industry by people like Kanye West, who expressed some trepidation that 3D printing could spell disaster for the future design, and perhaps for the exclusivity of his famous — and famously hard to get a hold of — Air Yeezus kicks.

The Adidas Megalizer dropped in in 2011 to turn dancers' steps into beats. When switched on via a small power button in the shoe's tongue, these babies convert movement into sound, making fancy footwork sound as impressive as it looks and all but eliminating the need for music.

Don't know how to dance? Don't worry; these shoes will teach you. They track movement and report back to a smartphone app, which then gives you live feedback so you can step up your game. The app also adds a layer of friendly competition, as users can share scores and challenge each other. It's billed as a tool to help fight childhood obesity by encouraging movement and dance.

Thinking your shoe closet officially needs an upgrade now? Yeah, me too.

Want more cool fashion? Check out the video below, and be sure to subscribe to Bustle’s YouTube page for more hacks and tricks!