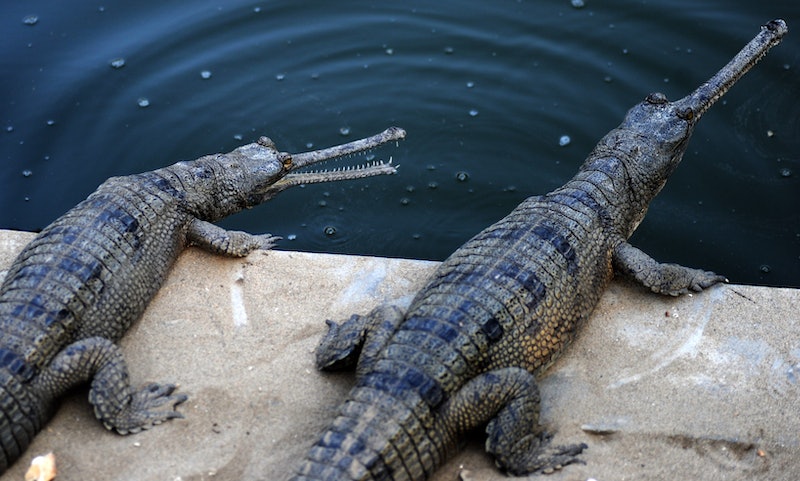 It seems like every other day, there is some new revolutionary ingredient that is better than all of the others before it. This time around, it's crocodile oil. Yep, you read that right. According to Allure, crocodile oil is the newest, trendy ingredient in skincare and could possibly replace the cult favorite — coconut oil — allegedly.

South African-based company Repcillin is on a quest to make crocodile oil the newest It ingredient in skincare, boasting its "natural anti-inflammatory and healing properties with a wide range of omega oils that are known to facilitate good health" on its website. Basically, crocodile oil helps keep a crocodile's skin healthy, so logic tells us that it could help keep our skin healthy as well, and according to Joshua Zeichner, an assistant professor of dermatology at Mount Sinai Medical Center, crocodile oil does just that.

The ethical implications of using crocodile oil in beauty products kind of varies depending on your thoughts on animal farming. Here's the deal — the crocodile oil found in these products is the previously unused byproduct from crocodile farming. Basically, crocodiles are being farmed for various purposes — for their meat, for their skin, etc. — and as a result, this crocodile oil exists. So on one hand, if you are very anti-crocodile farming (although it is very, very regulated by the Convention on International Trade in Endangered Species of Wild Fauna and Flora), crocodile oil might not be your thing. However, if you think of the crocodile oil, which used to be discarded, as a way of not letting any part of the crocodile go to waste, it can be seen as a sustainable ingredient. I'm rather torn myself.

Crocodile oil isn't the only weird animal ingredient found in beauty products. Here are some other weird animal products you might not know is in your makeup.

A lot of makeup, especially red lipstick, includes carmine, which is a red pigment found in cochineal insects. Yum.

Moisturizers contain various animals like squalene, which is an oil found in shark liver.

Lanolin is made from the sebum in sheep's wool.

Moral of the story? Weird animal ingredients are actually more common than you might think, so I'm not even surprised crocodile oil is the gearing up to be the next trendy skincare ingredient.