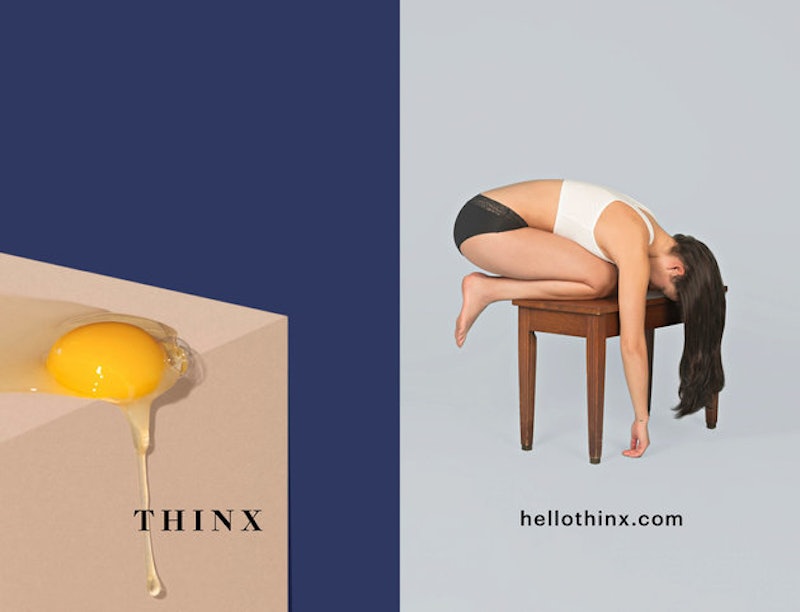 Let's talk about your period. No, but really, let's talk about it, because it seems that in 2015, the topic is still taboo among men and women. And the only way to change is to have a conversation. But according to Thinx, a period underwear manufacturer, the agency running New York City Metropolitan Transportation Authority's advertising allegedly doesn't think the word "period" is appropriate for NYC subways. Though the MTA says that it has not yet rejected the ads (only that they are under review), Thinx claims that Outfront Media blocked its ad campaign, which relies on punny pictures to sell its "underwear for women with periods," because it was considered too suggestive and risqué.

One ad shows half of a grapefruit which looks a bit like a vagina, and another shows a raw egg that could be a euphemism for a woman's period. Both are pictured with women wearing modest underwear alongside the company's slogan, "Underwear For Women With Periods." Sure, there are some innuendos in those pictures, but it's hardly the in-your-face sexualized imagery of female bodies that seem to have no problem getting on 60-foot tall buildings. "The MTA have published breast augmentation [ads] using grapefruit to show enlarged breasts, and we're getting pushback for using a grapefruit in a way more subtle way? Not OK," Thinx co-founder and CEO Miki Agrawal tells Bustle.

Thinx claims that Outfront Media, which helps manage MTA's advertising, was averse to using the word "period," and expressed concern that the imagery was inappropriate for children. In an email exchange between Outfront and Thinx, which Thinx provided to Bustle, the Outfront representative writes that the ads are "inappropriate" and show "too much skin." According to Mic, an MTA spokesperson said the agency had nothing to do with Thinx's rejected ads, and Outfront Media gave the following statement:

Together with our transit partners, OUTFRONT Media makes every effort to assist advertisers in creating campaigns that are both effective and appropriate to the transit environment. This is the approach that was followed with respect to the advertisements proposed by Thinx. No copy was ever rejected and the current copy is still in the MTA review process. We suggested changes that we felt were appropriate for the riding public and were hoping to work with the advertiser to refine the copy.

MTA, in response to the controversy, released the following statement:

We have not rejected the ads. We’re still reviewing the ads, which sometimes takes time when some people have strong reactions to an ad. We follow our standards, but we want to make sure we give it a full review.

MTA guidelines prohibit ads that sell "sexual or excretory activities" or promote a "sexual-oriented business," but if Thinx claims are true, then come on. Period underwear? That's no different from an ad for tampons or pads. And Thinx's ads are definitely less risqué than what you see from half-clothed models selling lingerie.

It's not the first time that New York subway ads have been the subject of scrutiny, but Thinx's case feels a bit different. These aren't breast augmentations we're talking about.

The ads aside, the bigger issue is that still, to this day, the idea of a period is kept on the hush-hush. "We live in a patriarchal society, where men have been afraid of the period. They didn't properly 'understand' it, even if they're here because of it," Agrawal tells Bustle. "The most uncomfortable thing that you can possibly talk about is a woman's period? Not OK."

And if the ads spur conversation? Thinx will be psyched. "It's awesome if a nine-year old boy asks his mom what a period is, because he’ll learn to respect girls and women, and it'll help give him empathy for what they go through," Agrawal says.

No one should ever feel embarrassed about their period, or shy about carrying a box of tampons at the checkout line. It's time to change the conversation surrounding a woman's body. Period.

More like this
25 Inspiring Quotes From Black Women To Celebrate Black History Month
By Kyli Rodriguez-Cayro and JR Thorpe
Here’s Where The NHS Nurses’ Strike Currently Stands
By Sophie McEvoy
24 History-Making Black Women You Probably Didn't Learn About In School
By Ayana Lage and JR Thorpe
These Artists Are Reimagining Black History Month To Create A Better Future
By Katie Mitchell
Get Even More From Bustle — Sign Up For The Newsletter
From hair trends to relationship advice, our daily newsletter has everything you need to sound like a person who’s on TikTok, even if you aren’t.