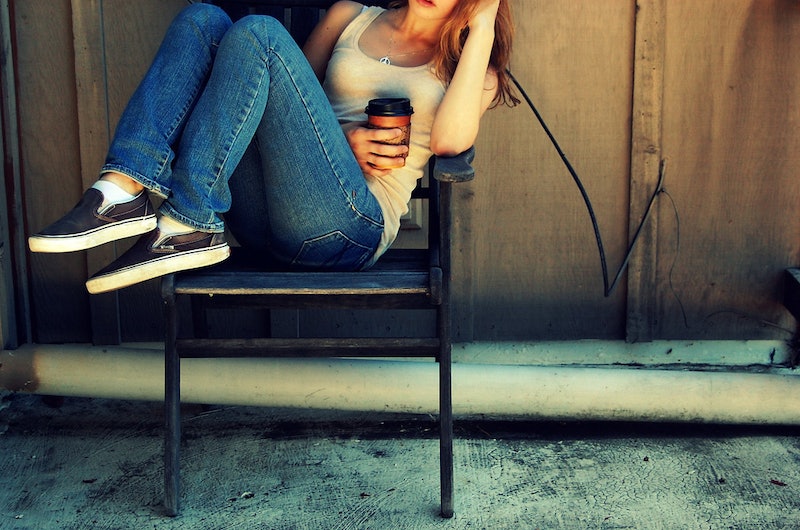 You probably already know that not getting enough physical activity will increase your obesity risk. That's just common sense. But what if you do the recommended 30 to 50 minutes of moderate exercise a day, every day, and spend the rest of it chilling out on a couch or in front of your computer? Surely you're staving off health risks by exercising every day, right? No, it turns out: even if you're a mover and shaker part of the time, long periods spent sitting down can have seriously scary effects on your health.

Look, I get it: you work a 9-to-5, or you're a college student; you don't have the opportunity to be on your feet all day long. But reading this research just made me push my chair back and decide to spend the rest of my working time today standing. (Standing desks are a thing; if you're concerned about your own sedentary lifestyle, see if your workplace will get you one, or try to do at least some of your work standing at a counter.) The people in this cafe think I'm bizarre, but my back does already feel a bit better.

If you're concerned that your day involves too much sitting, try to arrange things so that you can pace, stand, or even walk around while you're working. It'll probably make you better at your cognitive tasks, too, considering the amount of science that proves movement is great for thinking.

Still not convinced? Read on for the effects of sitting on your body.

1. You Don't Get Enough Oxygen

One of the things about sitting down is that we tend to sit rather awkwardly, hunched forward. The reality of that particular comfortable but damaging situation is that we do a whole realm of ills to ourselves — and virtually all of them could be fixed if, when we did sit down for a little, we sat ram-rod straight. (My grandmother recalled being strapped to a backboard on the chair to improve her posture.) One of the key problems? We're compressing our lungs.

The slouching difficulty, as explained by Medical Daily, is that we breathe most freely when we're upright, because that's when we're giving our lungs the fullest space to expand. Crouched over, they have limited space, and the corresponding smaller oxygen intake means that our circulation slows, less oxygen goes to our brains, and we're less able to perform well or concentrate properly. In its extreme form, low levels of oxygen in the body are called hypoxia, and your tissues will start to lose function because they aren't getting what they need.

2. You're More Likely To Get Breast & Bowel Cancer

This is a general difficulty with inactive lifestyles, not just specifically sedentary ones — the less activity you do, the more at risk you are for two separate kinds of cancers. Both breast and bowel cancer have been found to spike in people who don't do much physical activity. And it's not a small relation, either: the Center for Disease Control and Prevention has found that moving your butt makes you 40 percent less likely to get either of those cancers.

3. You're 147 Times As Likely To Have Heart Problems

Cardiovascular health risks are one of the biggest areas in which a sedentary lifestyle can cause havoc. It's partially a case of less blood flow due to lower oxygen, and partially the heart just not having enough to do and relaxing too much. People who sat seven to 10 hours a day, in a study of 800,000 people, were 147 percent more likely to have a serious cardiovascular event than people who rarely sat down. Yikes.

There have been a whole host of studies, so the link is a pretty accepted one. Part of the reason, of course, is that you're more likely to carry more body fat if you sit down: the longer you sit, the less capable your enzymes become in their duty as fat-burners. And obesity has a clear relationship to heart problems. That's only the beginning of the problem, though. The higher likelihood of having coronary heart disease, for example, the more likely you are to die of that disease. Am I scaring you yet? I should be.

4. You Lose Your Lean Muscle Tissue

This may not seem like a big issue, but sitting all day (more than five hours) means that your overall muscle mass reduces; particularly your lean muscle mass. Which is a dangerous position to be in, because later in life, lean muscle is what we rely upon for everyday activities, like opening doors, leaning over, and doing the grocery shopping. The less of it you have, the less able you'll be to be independent as you age. Which is a sucky thing to think about when you're just starting in the workforce, but this sh*t matters.

5. You Become Less Responsive To Insulin

Want to avoid developing Type 2 diabetes? Get up offa that thing. One of the biggest risks of sedentary lifestyles is that they stop the body being responsive to insulin, which is the key factor in the development of that diabetes type. The cause? An over-productive pancreas.

While you're just sitting there, the pancreas is producing insulin, but in an inactive body, the cells don't respond as well to it — which means glucose isn't removed from blood as quickly. Hence the diabetes risk. Diabetes risk can increase up to 14 percent with each extra hour you sit per day, depending on your other lifestyle factors, so it's worth keeping in mind.

6. You're More Likely To Have Back Pain

Chances are that you're not sitting in a way that would please my grandmother. But slouching or sitting like an elegant Victorian aristocrat both do the same thing eventually: the spaces between the bones of the spine become compressed, often in uneven patterns, and have less flexibility. That extra pressure raises your risk of herniated discs, and the muscles in your back are likely to weaken because you're not using them to maintain your inner core balance as you stand or move.

According to DNA India, many of the patients at spinal clinics across India are in their 20s and 30s and working at desk jobs, and chronic lower back pain among young American women has increased by three times since the 1990s.

7. You're More Likely To Die Early

The World Health Organization has said that sedentary lifestyles —they define the upper peak of a sedentary lifestyle as expending energy for 25 minutes or less per day — are one of the leading causes of obesity in the developed world. And obesity is one of the most deadly conditions for any adult to have, since it comes with a really high risk of attendant conditions — cardiovascular heart disease, diabetes, stroke, sleep apnea — that raise your likelihood of dying early.

A Harvard study in 2014 explicitly linked sitting too much to premature death. The Huffington Post even labeled sedentary lifestyles "the new smoking" after the real depth of these figures became known: sitting kills more people worldwide than HIV.

The good thing about this is that most of these risks can be staved off by a more active lifestyle and less sitting in general. The ideal combination recommended by most health organizations is the daily dose of 25-30 minutes of moderate exercise (in which you break a sweat and raise your heart rate), plus a more active lifestyle in general, in which you work standing up or moving rather than spending long periods in the one seated position.

If standing most of the day doesn't sound doable, an Australian study suggests that even short breaks from sitting — 10 minutes of standing or walking, every hour — can successfully counteract most of the terrifying risks mentioned above. So remember: exercise alone isn't enough. Standing desks, working on the go, tapping a tablet as you take break — it's the way of the future.