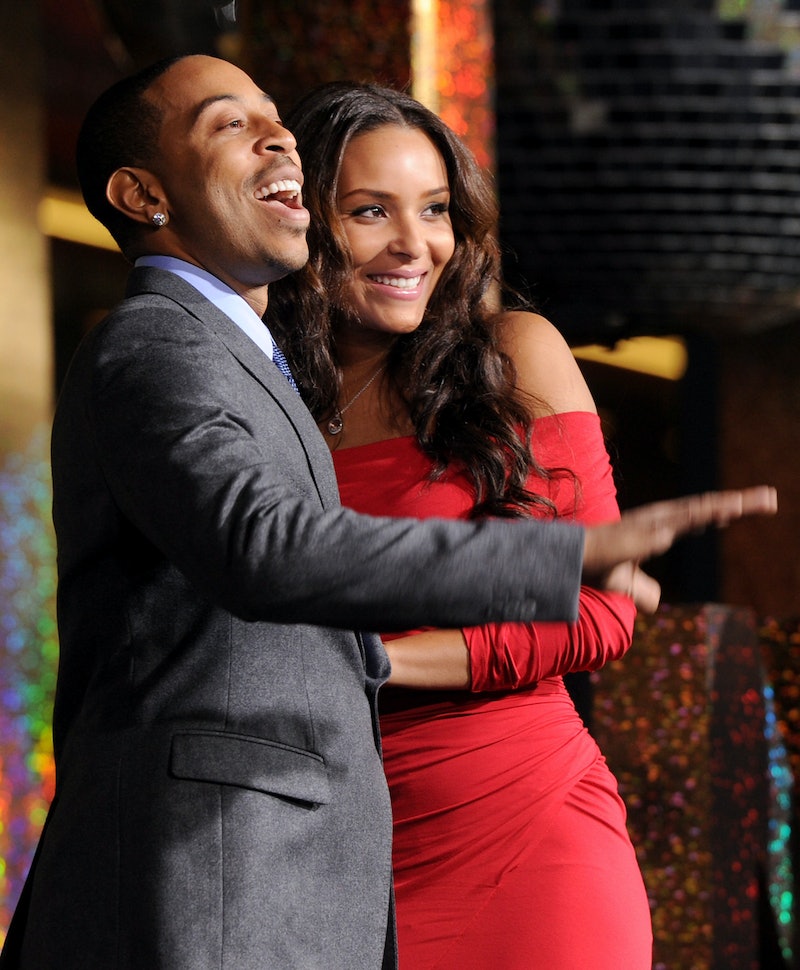 Ladies, ladies, ladies. In the words of a sage sassy gay friend, "What, what, what are you doing?!" In wake of the recent news that Dwayne Wade fathered a newborn son while on a break with now-fiance Gabrielle Union, we find out that Ludacris has gone and done THE SAME EXACT THING. Similarly, undeterred by the birth of his baby girl on December 9th, Ludacris' girlfriend is sticking by him.

First, before we delve into the many problems we have with these developments, let us define what a "break" is. A break is generally a period of time in a relationship when two people work out their problems on their own with a little space from their significant other. A break is not a steamy encounter with someone who isn't your fiance on a tour bus, in a hotel room, on a connecting flight, etc. Also, do breaks even really exist?! Lastly, Wade and Luda should probably go play lotto considering the odds that both of them were conveniently on a "break" with their partners while they impregnated these women. Perhaps they should have owned up to their mistakes and been completely honest, instead of trying to tell half-truths so that they could enjoy a ludicrous (get it?) loop-hole that doesn't label them as what they are: cheaters.

Now that we've established what a break is, what a break isn't, and what cheating definitely is, let's focus on the women who were betrayed in these situations. Both Wade's fiance, actress Gabrielle Union, and Ludacris' fiance, Eudoxie, have decided to stand with their men despite their non-fidelities. Now, we have to ask the question-- WHY? Why agree to marry a man who has not only had sex with someone else while you were clearly together, but did not even have the decency to be safe while doing it? It shows just how little both Wade and Ludacris thought of their significant others. It boggles my mind to think that even the beautiful and talented Gabrielle Union falls victim to the same rhetoric that us mere mortals do, that he is just so sorry and that he'll never do it again. But guess what, he will because he has, and both of these ladies should have the wherewithal to know that.

Celebrity or not, it troubles me to think that even in 2014 women still put up with men who don't realize their worth. What women like Union and Eudoxie don't understand is that they further perpetuate the problem by staying with them because in essence, they are saying that this type of behavior is okay. But it's not. And it's really not okay that two of these stories have made headlines in just one week. I read these articles who so easily absolve Wade and Ludacris and realize that the same people are slut-shaming women like Kristen Stewart a year and half later.

Now, you may think that I'm being harsh. I understand the beauty of forgiveness and the healing that takes place for both of the people involved. I agree that these men should be forgiven, after all we're humans and none of us, not one, is perfect. But can't we forgive without forgetting? Can't we forgive and agree that perhaps it isn't wise to enter a marriage with someone who couldn't be faithful before that even began? Or that maybe staying with them is setting a precedent for future missteps? Perhaps when we let these men face the consequences of their actions they will finally realize that what they did wasn't okay.