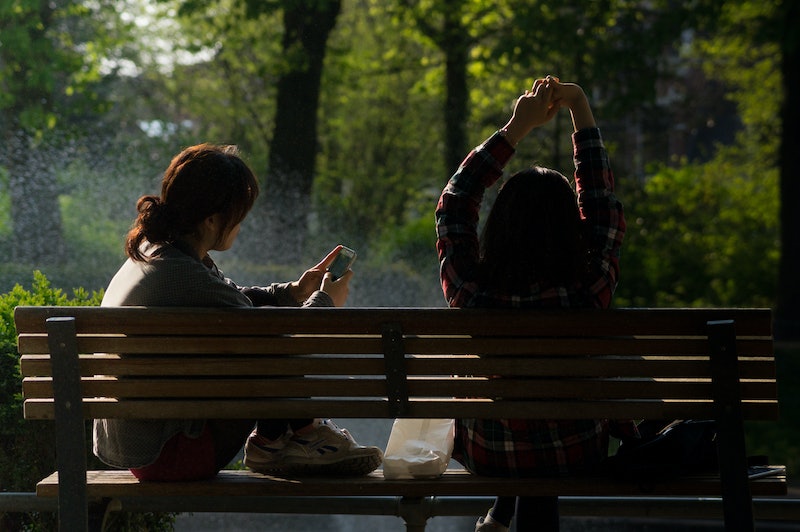 The term “ex-best friend” is quite possibly the most depressing term in the English language. To think that someone who was your best for any period is officially out of your life is heartbreaking; but the fact is, it happens. Figuring out how to break up with a friend is never easy to do, but things happen, people grow apart, lives change, and somewhere in the middle of all of that, friendships end. There is no easy way to predict exactly how things will end, but there are ways you can handle it that serve to lessen the blow.

The only major friend breakup I ever went through was when I was 17. My best friend from the time I was in diapers and I had drifted apart, and ultimately did a lot of typical teenager stuff to hurt one another. After months of avoiding each other and pretending there wasn’t a problem, we ultimately had a real, formal breakup conversation over spicy tuna rolls at our favorite sushi restaurant. It was awful.

In a telephone interview with Bustle, Dr. Andrea Bonior, author of The Friendship Fix, offered some tips on how to end a friendship kindly and respectfully. Her #1 piece of advice? "Civility, civility, civility."

Here are 12 more tips on how to breakup with a friend with as little pain as possible.

Nobody wants to have a tough conversation, especially when you know it’s going to be awkward and someone is going to get hurt. As a means of avoiding this, first try to slowly phase your friend out of your life. Back off a little bit, don’t call them as much, accept fewer invitations — that sort of thing.

"It only works if it's a two way dance — if the other person takes the hint and sort of backs off too," says Dr. Bonior. If it’s not, the other person may not understand what's going on and continue to try to spend time with you. If that's the case, you need to suck it up and talk to them.

2. Know That The Conversation is Going To Be Awkward — Do It Anyway

If the friendship ending isn't mutual, the slow fade can be hurtful and leave the other person wondering what they did wrong. Anyone who’s ever been broken up with by someone they were dating this way (me) knows how frustrating it is. You owe it to your friend to have a conversation. There’s going to be awkwardness. Don’t use the awkwardness to avoid doing what you need to do.

"Unless it was an incredibly abusive relationship, you owe it to the relationship to at least treat them respectfully and civilly,” says Dr. Bonior. “Ghosting” your friend is really not fair.

If your friend is going through a difficult time, you need to be sensitive to her feelings. If she just got dumped by her boyfriend or her cat just died, for example, it may not be the best time for her to lose a friend, too. Remember, as much as you can’t stand this person (assuming that’s the case, considering you’re about to break up with them) they were, at one point, someone you enjoyed being friends with. Don’t be cruel.

You need to make it clear that the friendship is over, but there is no reason to rehash every detail of what happened between you. Even if a relationship is ending because it’s been particularly toxic, there’s really no need to get into it. “Be respectful, be very general, and be vague. Don’t start any fires. Say something along the lines of 'I really value you as a friend, but I think our lives are going in different directions. I’m being pulled elsewhere and don’t think I’m going to be able to spend as much time with you,'" says Dr. Bonior. Don’t make it about them, don’t turn it into a fight, and don’t make it about them; but clearly let them know that you won’t be hanging out again.

Make sure your friend understands that it’s really over. "You need to be clear enough that the person doesn’t think it’s just a temporary thing," Bonior advises. Validate the friendship you’ve had and put it in the past.

6. Decide What You Want Out Of The Conversation

In situations where things have gotten really bad (think screaming and fighting), a vague conversation may seem disingenuous. If you feel like you need to say more, decide what you are trying to get out of it. Are you trying to help them by giving them a little bit of feedback that they can use for the future? Are you trying to rehash what’s happened and move on for yourself? Are you trying to get the last word? If it’s a situation that’s been really really tough, you should acknowledge it to some extent. Bonior suggests saying something along the lines of, “I know we’ve had our ups and downs, I’m just in a place where I have to move on.”

Like with any sort of breakup, your friend deserves the respect of a face-to-face conversation about why you’re deciding to end your relationship. "I'm always a fan of the in-person conversation for these types of conversations," says Bonior. Doing it over text/email/Facebook is selfish, and your tone and meaning may get lost. If you really can't handle the awkwardness of a conversation, a digital "this is over" (put more nicely than that, I would hope) is better than nothing.

As someone who got friend-dumped in a sushi restaurant, I can honestly say that this might be the most important item on the list. Do it at his or her house, or in a park, or on a sidewalk bench after a really fantastic afternoon of mani’s and pedi’s (she’ll be relaxed!). Don’t do it when you’re drinking, and especially not around your other friends.

Your breakup should be between you and your friend — that’s it. Even if you’re part of a bigger group of girls who also want to end their friendships with this person for their own reason, you need to do it on your own. You may do this without realizing it; for example, venting about your recent breakup to a mutual friend. "The best way to avoid this is to be discrete about it," says Bonior. This isn’t high school, and you aren’t Regina George.

I can’t stress this enough: Be. A. Grownup. If the two of you have mutual friends, you need to be understanding if they want to remain friends with both of you. "Don't try to get people on your side. It's that simple. That's the highroad," says Dr. Bonior. After all, this is your breakup, not theirs.

When you and your friend break up, it should stay between the two of you. Talking shit about her on social media is obnoxious. While we’re at it, let’s agree in general to stop talking badly about each other. If Tina Fey preached it in Mean Girls, it must be worth noting. Again, this isn’t high school, and cyber bullying is lame.

Like with a breakup from a significant other, the set way for a friend breakup to stick is to give each other space. You are no longer each other’s “person” anymore, and need to adjust the relationship accordingly. Be respectful and give space when it's needed. Even if you end things on good terms, a simple “hi, how are you doing” and a quick hug when you run into each other or a happy birthday text once a year, should suffice.

Breaking up with a friend is never going to be comfortable or fun, but there are ways to go about it in a respectful, kind way that still allows you both to have some much-needed space... and that's what really matters at the end of the day.