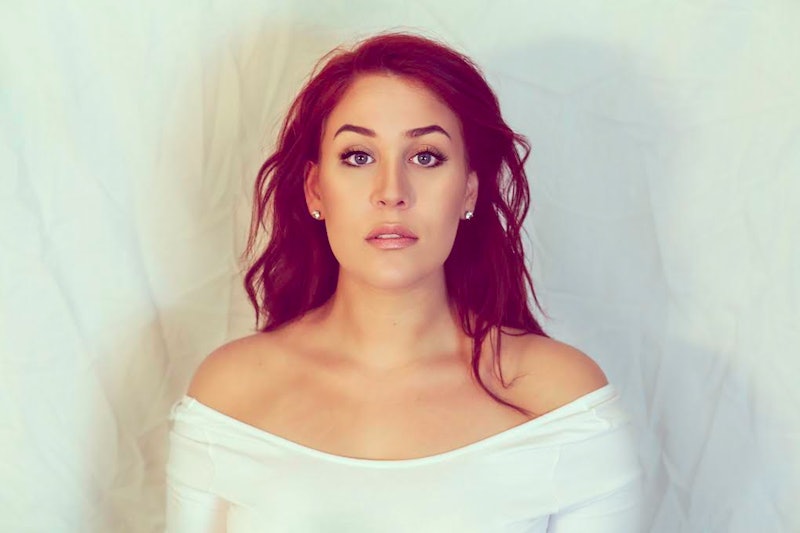 Alaura Hernandez was 16 when she found her first lump. She already knew to check her breasts, because, as she puts it, "essentially every woman over the age of 40 on [my dad's] side of my family has had breast cancer." Her mother took her to the doctor right away — luckily, it was a benign tumor. There, she also learned that she had hypoplasia, an underdevelopment of tissue, in her left breast.

"I always knew my left boob was a little smaller than the other — about a cup size, actually. But it turns out hypoplasia means that it’s technically underdeveloped, and there’s a very good chance that I won’t ever be able to breastfeed," Hernandez tells Bustle.

She had the benign tumor removed, and the now-21-year-old Hernandez began checking her breasts religiously, almost obsessively. The experience of the constant lump scares, coupled with her family history of breast cancer, continued to unnerve her. But it wasn't until Angelina Jolie's editorial in the New York Times about her preventative mastectomy went viral in 2013 that Hernandez realized she had other options.

"Just reading about it, it made so much sense to me — that you can almost entirely eliminate your chances of ever getting cancer with the surgery. For a lot of people, it’s very drastic, but for me, it was a no-brainer."

She went to a plastic surgeon to check out her options for the procedure.

"He didn’t really give me any resources or discuss options with me. He just kind of shut me down, and that was that. And I was under the impression that that was the response I was going to get. I kind of thought 'oh, you know, I’m too young.'"

"No doctor would even perform the surgery. They were saying things like 'you’re too young'. I had a physician say to me, ‘You really should think about getting married before you do this.'"

Before Lindsay Avner became one of the youngest women to ever have a preventative double mastectomy at the age of 23, she faced a similar bias from doctors, and even from her mother, who also has the BRCA gene.

"It was [2005], way before there was Angelina Jolie or any sort of conversation about this, and I remember my mom even saying to me initially 'maybe you shouldn’t share that [you have the BRCA gene] information with guys that you might want to be with.'"

But Avner, whose great-grandmother, grandmother, and mother had all had cancer, was determined to take proactive measures. The fact that Avner had the BRCA gene meant she had an up to 87-percent lifetime risk of developing breast cancer. As a woman with the BRCA gene, a double mastectomy would reduce her risk of getting breast cancer by at least 95 percent. (The surgery reduces the risk by up to 90 percent in women who only have a strong family history of breast cancer.)

"I actually consulted with a couple doctors here in Chicago, and no doctor would even perform the surgery. They were saying things like 'You’re too young.' I had a physician say to me, ‘You really should think about getting married before you do this.'" Avner says this happened at a respected medical institution.

But Avner knew she wanted the surgery. She was sick of the constant stress, the constant exams and worry. "The problem with it all is that you walk through the door and you’re always the youngest person in the room. And you’re not sick, you’re healthy, " Avner says. "But yet you’re tackling this in a way where it makes you feel as though you’re sick. You breathe that sigh of relief when you find out that the test came back OK. But then you know six months or three months later you’ve got to head back."

Avner shared her story with the Chicago Tribune — and ended up on the front page. After that, she was able to find a doctor to preform the preventative double mastectomy. She went on to found Bright Pink in 2007, a national non-profit focused on the prevention and early detection of breast and ovarian cancer in young women. Bright Pink seeks to educate young women about the fact that a staggering one in eight women will develop breast cancer in her lifetime — but that when it's detected early, the five-year survival rate for breast and ovarian cancer is greater than 92 percent.

Bright Pink is also a crucial source of support for women who have already been diagnosed, which is how Sarah Roter Daly found the organization.

Daly, then in her late 20s, was also considering a double mastectomy. She had tested positive for the BRCA gene in 2004, and by 2007, she'd decided to have a preventative mastectomy. For her, she says, it was practically a no-brainer.

"I didn’t have children yet, I just got married. And it was between me and my husband and we just chatted about it, you know, to remove my risk was not a problem. We knew that my boobs would be perfect. I’d have perfect boobs through pregnancy!"

She found a doctor to perform the surgery, which she couldn't be happier with.

Daly ended up having two children after her mastectomy, and not being able to nurse was not a problem for her, she says — especially since it meant she and her husband could share feeding responsibilities more evenly. She concedes that since she is athletic, there have been a few small changes to her fitness routine.

"I’m a person who used to love to do push-ups. I no longer like to do pushups because the sensation is a little awkward. If I do yoga class, I don’t lay on my stomach as much as I used to because there is a difference. It feels a little different to me." Those changes, she says, are negligible, and she has no complaints about her decision.

Back at school at Northwestern, Hernandez was still unsure whether a doctor would perform a preventative mastectomy on her. She continued feeling for tumors, almost obsessively, she says. "I was turning into a breast-cancer hypochondriac. The lump that I found a couple weeks ago turned out not even to be a lump. It turned out to be a normal bit of harder breast tissue."

That's when Hernandez got involved with Bright Pink, and finally found a doctor who supported her decision to get a preventative double mastectomy, given her family history of breast cancer. She plans to have the procedure done right after she graduates in the spring. For her, she says, the decision is also a no-brainer.

"Here I am with two massively uneven breasts, won’t ever be able to breastfeed [anyway], my chance of getting cancer is incredibly high. Why don’t I fix them — make them even and also eliminate my risk of cancer?"

"I heard, occasionally, that some women can develop some sort of feeling after a couple of years. I’m preparing for the worst. I’m preparing that I’m not going to be able to feel anything."

"My breasts are a big part of my identity," she says. "My breasts were always something I was confident about despite the fact that one’s a cup size smaller than the other."

Then, there is the loss of sensation. While some women do opt for a nipple-sparing mastectomy, only 30 to 60 percent of those women report regaining some sensation. (This isn't possible for women who opt for the nipple to also be removed.)

That said, Hernandez says it's difficult to think about anything much beyond the immediate post-op experience at this point. She's most worried about the period after her mastectomy but before her implant procedure, when she won't have breasts, only a tissue expander between the skin and chest muscle instead. (The tissue expander stretches the skin to make room for the implants.)

She's cautioned her boyfriend that in those couple months she expects she'll feel self-conscious around him, but he's reassured her somewhat. "He was like 'Alaura, I don’t care. You’re doing something that’s so good — I don’t want you to ever have cancer. What you’re doing is so smart and it makes so much sense. I’m going to support you through it.'"

Supportive boyfriends aside, Avner understands Hernandez's fear — at 23, she had it too. "I ended up starting to date someone a couple months after the surgery, and I remember that moment right before your shirt comes off and you’re like 'To me they look OK but I have no idea what someone else is going to say'. And I always tell women, you determine how other people are going to see you. If you just say to yourself 'This is me. It’s the new normal. It’s not what I originally had, but you know, it’s great in other ways,' [other people will follow.]"

There's also more to healing than aesthetics, of course. "As the nerve endings are coming back you get these prickly sensations that can be kind of painful," Avner remembers. "[But] at this point, it’s so interesting ... I can’t remember what it was like for anything to not be like this — it’s like any part of your body. It becomes a part of you."

Emboldened by her internship at Bright Pink, Hernandez decided to announce her decision a few weeks ago, on Facebook. The response was overwhelming.

"When I announced it via Facebook I had people telling me that I’m a hero, which is very nice. But at the same time, I’m not. It’s just being smart. I don’t think of it as inspirational. I would not say 'hero' at all. I would just say it’s the smart thing to do. And any woman that has a high risk of breast cancer needs to really consider it."

Sure, she's scared — but Hernandez is also trying to look on the bright side.

"I’m going to be graduating, and trying to start my life, and I’m getting this huge procedure done at the same time, which is going to be hard. But I keep thinking, once it’s done ... I’m never going to have to worry about [breast] cancer again in my entire life. To me, that would be worse than losing sensation or scars that might come along with it."

Hernandez doesn't believe the surgical route is for everyone — but if you are high risk, she suggests enrolling into a high-risk breast cancer program, getting involved with an organization like Bright Pink, and most importantly, educating yourself. As for her own life, she's confident she's making the right decision — and not a month too soon.

"I had [always imagined] I'd have to talk to my boyfriend and tell him 'I probably will have breast cancer at some point in my life. Heads up!' It was always in the back of my mind. But now, it doesn’t have to be like that. I can change it."