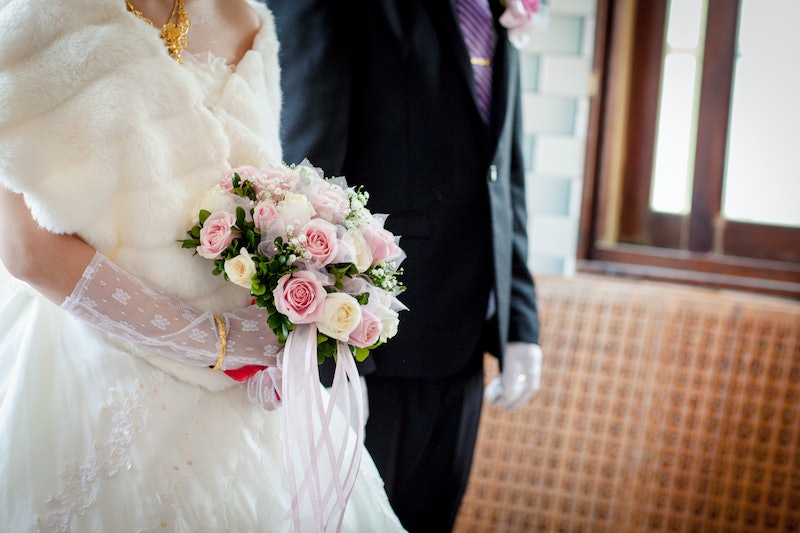 When Maryland newlywed Brelyn Bowman gave her father a "certificate of purity" at her wedding in early October, it was quite a unique decision for a modern-day bride to make. Thanks to the strides feminism has made in the past 30 years, modern weddings are rarely predicated on the belief that a woman's worth to her husband lies in her virginity. As unusual a choice as it was, though, nobody could have foreseen the impact it would have online — a veritable storm of media attention from both supporters who found her gesture touching and critics concerned with the double standard inherent in idealizing women's virginity. Particularly disturbing, though are the responses that attack Bowman for her choice. Is the idea of a "certificate of purity" yet another indication of a broken patriarchal society? Possibly; the patriarchy does have a long history of conflating a woman's worth with her sexual activity. But is it OK to harass someone over the choice to make such a certificate a part of their own wedding? Absolutely not.

I'll admit that I myself find the idea of a certificate of purity problematic. The first question about it that springs to mind is this: How exactly is a woman supposed to "prove" her virginity? According to an Instagram post by Bowman, the certificate was signed by her doctor and stated that her hymen was still intact. As many comments have pointed out, however, this is a dubious method at best; women are born with varying amounts of hymenal tissue, and the hymen itself can be stretched during all kinds of nonsexual activities such as sports or riding a bicycle. At worst, the obsession with hymens as a sign of virginity excludes survivors of sexual assault, which is a troubling view to say the least.

Another issue with the certificate itself has to do with the double standards surrounding virginity and the sexual activities of men and women. Bowman wrote on Instagram that the certificate was part of a promise to remain abstinent that she and her siblings made to her father when she was 13; in fact, according to BuzzFeed, her sister presented a similar certificate to their father at her own wedding six years ago. Their brother, on the other hand, engaged in sex before marriage — a possible illustration of this double standard. While men are encouraged to sow their wild oats with abandon, women are expected to remain abstinent until they are "given" by their father to their husband. Simply put, it's a relic of centuries past when women were property to be traded from man to man, and our worth was dependent on others' perception of our "purity."

Critics have also pointed out that there is no test, dubious or not, to determine whether a man has had sex, nor has there historically been interest in developing one. "Not trying to have a negative response to this, but can the groom do the same? Can he present a certificate of virginity?" reads one Facebook comment.

Bustle reached out to Bowman for comment but had not recieved a response by press time.

No matter your personal feelings on the matter of virginity, sexism, or the patriarchy, though, Bowman in no way deserves the vitriolic online harassment she has received since getting married. Does a certificate of purity harken back to times when women were regarded as objects of purely sexual and ornamental value? Maybe. But to attack Bowman for her decision, which she made because virginity is clearly something she values highly, takes away her agency just as much as it does when people attack sex workers for "giving in to the patriarchy," so to speak. Feminism is about giving women the freedom to make their own choices, and sometimes means sitting back and letting women do their own thing, whether we would make the same decisions or not. In fact, there are so many women out there that chances are pretty high we won't all agree with each other — but that doesn't mean we should try to tell each other what to do. It just means we all need to learn to be more accepting.

There are all kinds of women in the world, and there's no fixed mold for the "right" way to live your life. In the immortal words of Miley Cyrus, Imma do my thing — and I suggest we let each other do the same.

More like this
17 Creative Bridal Shower Gift Ideas For Any Type Of Bride
By Marilyn La Jeunesse
The Best Time To Date After A Breakup, According To Experts
By Bustle Editors
Hinge's New NFAQ Feature Is Demystifying Queer Dating
By Emma Carey
Virgo & Sagittarius Zodiac Compatibility, According To Astrologers
By Kristine Fellizar
Get Even More From Bustle — Sign Up For The Newsletter