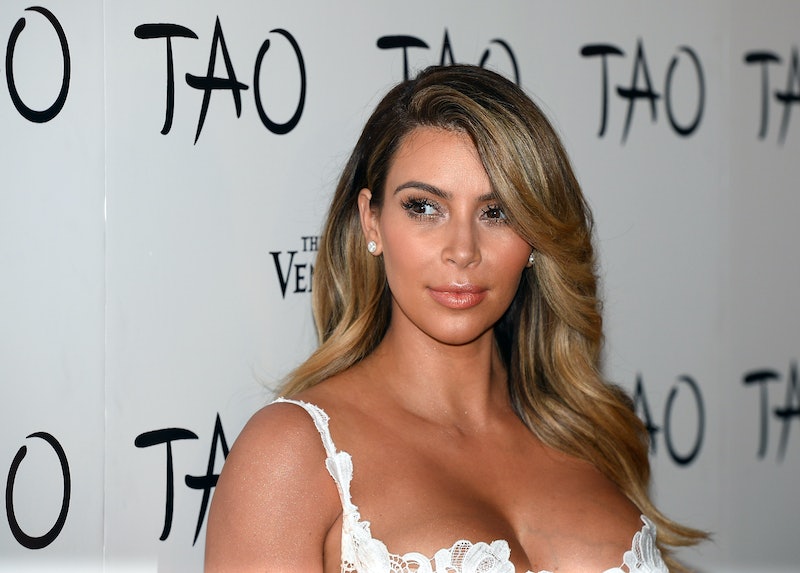 Kim Kardashian has a big butt and regardless of how she got it — injections? some kind of strange diet? working out solely on a StairMaster? — it's there and it's undeniable. And she loves it which explains why she tends to pose with her ass jutting out, looking over her shoulder and explains why Kim Kardashian posted a photo of her ass on Instagram of her own booty next to an even larger one. The spectacular butt at hand is that of Blac Chyna, Kardashian's friend, workout partner, and badonkadonk inspiration.

But who is this butt, really? People asked that question of Kim Kardashian all those years ago when she was trailing around behind Paris Hilton and then she became the most famous butt in the world. Also, she got a TV show and became super rich and got engaged to Kanye West or whatever, but we're hear to talk about butts. And now there's a new butt in town. Will this butt follow in Kardashian's footsteps? Will this butt get it's own reality show and have to prove itself through x-rays? Let's find out some more about the lady behind the mysterious behind first, then decide.

Chyna has been engaged to the rapper since December 2012. They've appeared on the cover of Urban Ink Magazine together and Chyna was featured in Tyga's music video for "Rack City."

3. Her job is ambiguous.

Supposedly Chyna was a stripper when she met Tyga, but currently it's hard to tell if she has a job or what exactly it is. Model? Rapper? Music video star? Stay-at-home mom? Kardashian's "job" is a little vague too. She's treading on your territory, Kim!

4. She lives in Calabasas.

Tyga and Chyna live in a $6.5 million mansion in Calabasas, California aka Kardashiland.

Blac Chyna has a website that she doesn't update often and that doesn't contain much information. It does have the most strangely Photoshopped picture of a child you've ever seen. (I'm not exaggerating.)

No, not to have a larger butt. In Bynes' case, Blac Chyna was the inspiration behind her cheek piercing and blonde hair.

So, is Blac Chyna posed to take over Kim Kardashian's butt popularity? Probably not. Kris Jenner would strangle her before that happens.

More like this
North West Will Make Her Acting Debut Alongside Mom Kim Kardashian
By Radhika Menon
Did Pete Davidson Remove His Kim Kardashian Tattoos? Photos Point To Yes
By Alyssa Lapid
Everything You Need To Know About Kanye's Post-Kardashian Dating Life
By Bustle Editors
Kim K, Oprah, & Jennifer Lopez Celebrated 25 Years Of Anastasia Beverly Hills
By Olivia Rose Rushing
Get Even More From Bustle — Sign Up For The Newsletter
From hair trends to relationship advice, our daily newsletter has everything you need to sound like a person who’s on TikTok, even if you aren’t.