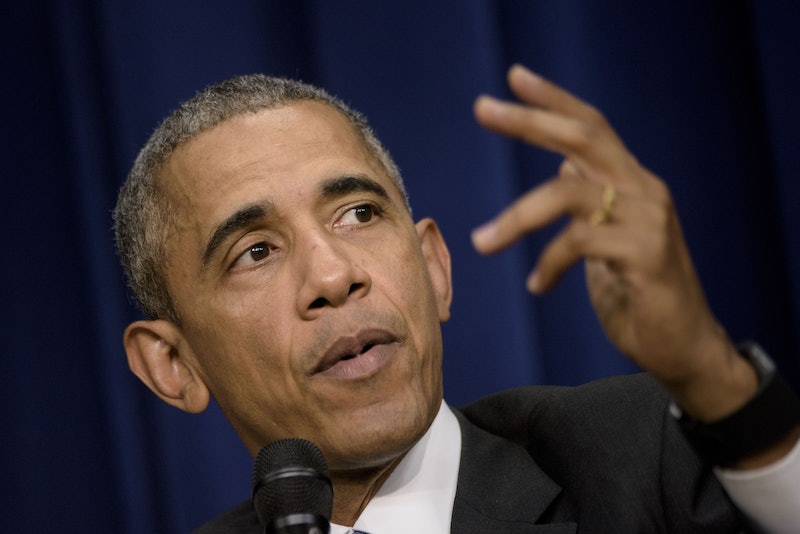 Hosted by the Marshal Project, a panel discussion on criminal justice reform was held on Thursday at the South Court Auditorium at the White House and included a lengthy talk that spanned comprehensive criminal justice reform, such as reducing incarceration rate as well as the punishment of nonviolent drug offenders. The Marshall Project hosted the event, with editor-in-chief Bill Keller moderating a panel composed of President Obama, Los Angeles Police Chief Charlie Beck, and U.S. Attorney for Colorado John Walsh. The president said he's firmly committed to these issues as he concludes his second term, and Obama defended Black Lives Matter, showing strong support to organizers working towards equality.

Keller prompted the panel about the public's distrust of law enforcement as it relates to the Black Lives Matter movement. Obama talked at length about poor minorities as well as other vulnerable communities and how the fight against racial bias has been a continued struggle in the criminal justice system. He even hinted at his own experiences with profiling, saying:

We did a little interview before I came out here, and Bill asked, 'What had been your experiences?' And I fessed up. I have — as a young man, there have been times where I was driving and I got stopped and I didn't know why.

The conversation continued from there, with Beck praising the organizing of police chiefs to form a new organization committed to criminal justice reform and Walsh highlighting previous successes to build upon, including placing a stronger focus on community and reentry programs. Obama took the final moments of the panel discussion to firmly voice his support of the Black Lives Matter movement, calling it just as pivotal to the fight towards reform as police efforts as well as praising its unifying aspects. BLM isn't about exclusion, the president said, but rather highlighting a systemic problem that especially affects people of color. Obama said:

I think the reason that the organizers used the phrase “Black lives matter” was not because they said they were suggesting nobody else's lives matter; rather, what they were suggesting was there is a specific problem that is happening in the African American community that’s not happening in other communities. ... We as a society, particularly given our history, have to take this seriously. And one of the ways of avoiding the politics of this and losing the moment is everybody just stepping back for a second and understanding that the African American community is not just making this up, and it’s not just something being politicized; it’s real and there’s a history behind it.

For Obama to make such a strong statement, especially to close a panel on criminal justice reform, suggests a real commitment to an issue that has caused mass overcrowding in prisons and formed a failing system that is hurting some of the most underserved. Already, bipartisan legislation has been introduced to eliminate mandatory life sentences for nonviolent drug offenders faced with their third strike. If all goes efficiently, Obama may be signing that into law before he leaves the White House.

More like this
6 Organizations Fighting Police Brutality That You Can Support Right Now
By Syeda Khaula Saad and JR Thorpe
25 Inspiring Quotes From Black Women To Celebrate Black History Month
By Kyli Rodriguez-Cayro and JR Thorpe
8 Charities To Donate To During Black History Month
By Alexis Morillo
42 Black Owned Fashion & Beauty Brands To Support Today & Always
By Mekita Rivas, Shea Simmons, Kui Mwai and Dominique Norman
Get Even More From Bustle — Sign Up For The Newsletter
From hair trends to relationship advice, our daily newsletter has everything you need to sound like a person who’s on TikTok, even if you aren’t.