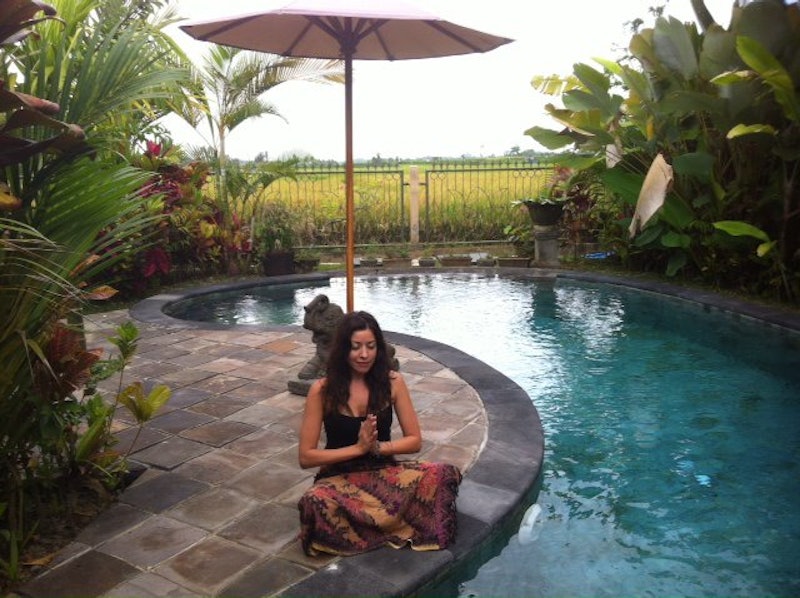 At the beginning of 2015, I was making yet another student loan payment, feeling like I was hardly chipping away at the debt I had accumulated since graduating in 2010. While I wouldn’t change going to grad school, my student loan debt certainly made me question my decision at times. But that day, something about making my loan payment felt different. Where there was usually just a sense of aggravation and hopelessness, I now felt a strong desire — I didn't want this debt following me around anymore. I didn't want to feel stuck in a job or scared to make any sudden movements, as if my life choices were one stack of teetering Jenga blocks. Mostly, I didn't want to feel like I was being held hostage in my own life simply because I said "yes" to an education.

That day in January, I still had $52,000 left to pay, which isn't far from what I owed the day I graduated. Interest rates and the cost of living can sometimes make your monthly payment seem futile — it just never seemed to go away. I knew that debt doesn't just disappear, and trying to pay it down the traditional way didn't seem to be working. So I started to make a plan.

After long talks with my husband, we decided we would pay off my loans by moving somewhere that was super cheap, where we'd also be comfortable, happy, and fulfilled. (I don’t deny that I live a privileged life — I am one of those fortunate people who have a location-independent job.) And so we decided to move to Bali.

This isn't as out of left field as it may seem. I've been everywhere from Bogota to Byron Bay to Berlin to Bangalore. But this isn't because I'm lucky. I didn't just stumble upon this kind of life; I worked hard and made a lot of sacrifices like everyone else in pursuit of it.

And I was ready to work hard again to make this new dream come true. I used up my entire savings (about $17,000) to dramatically lower my principal, which left me with $35,000 to pay over 10 months, as well as no safety net if the plan didn't work out. But I went ahead anyway.

In October of 2015, I celebrated making my very last student loan payment. And it took me less than one adventure-filled year with my laptop and my clever husband to do exactly that.

What did I learn from moving to another country with a lower cost of living in order to pay off my loan quickly? My plan isn't necessarily for everyone, but these four factors below helped it succeed — and might help you to develop a plan that both pays off your loan and enriches your life.

1. Make A Plan Before You Start

Living in New York City, where I earned my MFA and first obtained my location-independent job (which was not location-independent at the start), was a trip. And I’ve never regretted it — it made me a better writer, a better reader, and a better worker. But feeling broke all the time due to the very high cost of living certainly dampened my outlook. It took four years in New York for me to figure out that I didn't actually need to live there to succeed. If I wanted to, I could keep traveling like a college kid, with nothing on my back but a pack of rolled-up clothes and a map. All I had to do was come up with a plan and prove that it was possible.

I decided to take my job with me to Bali. I was able to do this because I made a detailed plan that proved to my employer that I would be able to continue doing my job while living across the world.

Knowing a skill (in my case, copywriting and SEO) that wasn’t dependent upon location was the first step that helped me take my job on the road. Then, while working for a start-up company, I proposed a detailed plan for remote work, and designed it as a trial. I worked over the course of the trial to prove that not only could I successfully produce outside of the office, but also that I could produce more outside of the office than onsite.

Coming up with a plan this detailed before I left — rather than flying by the seat of my pants — ensured that I had as much security as possible, and also that I appeared more trustworthy in the eyes of my employer. Without this plan, my idea may have seemed too risky. But when I shared details about my specific working hours, and agreed to check in regularly to show my progress and to return if the plan wasn't working out, the risk was significantly lowered. I was able to take my job (salary and benefits included) on the road with confidence.

I know that this specific set of circumstances is unique to my life, and not applicable to everyone else. But making a plan and asking my employers to take a (moderate) risk on it — rather than assuming that I had no option but to quit my job and move or to keep my job and stay — made a huge difference.

It hurt to put more than half my paycheck toward my student loan every two weeks, but for years, all I had been doing was paying off interest. Making bigger payments (to principal) makes all the difference.

Before deciding to move to Southeast Asia, I traveled to more expensive destinations. I lived in an apartment near Montmartre in Paris, I hung out in Maui for a while, and I spent some time in Barcelona. While these experiences were rich and meaningful, my debt was always there with me. It took a few years to get to the point where I figured out that I could have both adventure and financial independence. But I'd have to make some tweaks to my lifestyle to do it — by finding an adventure that also left me with more money to work with.

Student loans don't go away with get-rich-quick books or praying. They go away with budgeting. Moving to Bali made it easier to keep track of every last dime I spent, and to hold myself accountable to a fixed spending amount every month. Which isn't that hard in a place where a good meal might be $10. My husband and I "splurged" a bit on a private villa in the rice fields of Ubud, which had a kitchen, Wi-Fi, and swimming pool, and which only cost us $500 a month. Due to our budget plan, we knew that we could do this and still pay off my loan quickly.

So no matter where you're living, budgeting is the way you're going to pay off your loan. But when looking at your budget, know that there are options besides paring your life down to only the absolute essentials. You may want to ponder whether you'd rather cut out all the things you enjoy in order to save money, or change some element of your circumstances so that you can still enjoy life and pay off your loan.

4. Budgeting Doesn't Have To Mean Being Miserable

As I said above, living on a budget doesn't have to mean living the same life you always did, just with all the non-essentials cut out. It can also be motivation to be creative and find a way to live a fulfilling life with fewer expenses. Living in Bali, I ate delicious organic food, went to the spa almost every day, did yoga, saw gamelan concerts, and simply enjoyed myself. If I were living in the U.S., the cost of my lifestyle would have been at least three times as high — but because we had decided to make a big change based on our budget, rather than just trying to cut corners in our present lifestyle, I was able to do all of this and still save money.

Think about the ways you could save money without cutting all enjoyment and excitement by changing certain aspects of your life or moving, rather than by just cutting down on your current life. Every city — and life itself — can be fun and inspiring if you're willing to consider alternatives.