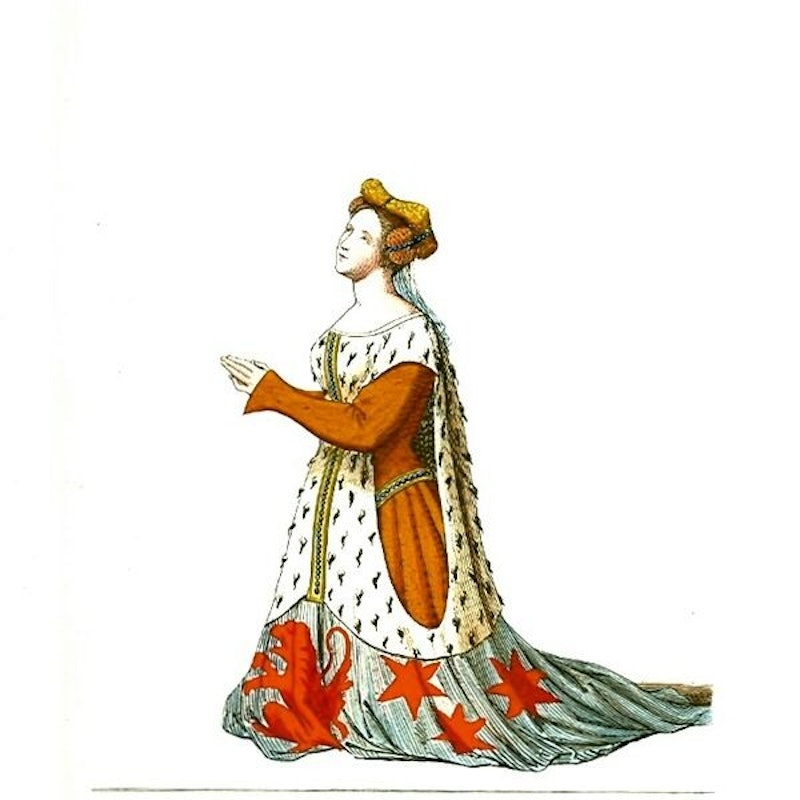 Ever looked around your local mall and wished there were fashion laws that could prevent the more egregious sartorial crimes you're witnessing from taking place? If so, perhaps you were simply born into the wrong time period. Medieval and Renaissance Europe, ancient Rome and even early colonial America had actual laws on the books about who could wear what. But don't think that those governments drew up these laws because they were just a nation of aspiring Anna Wintours; rather, the sumptuary laws, as they were called, were usually about making it clear who was in what class, and preventing people from dressing "above their station" or being too outrageously decadent.

Some of the laws that have regulated dress throughout history are, to speak frankly, completely bonkers. But it's also important to remember that, for the most part, wearing the wrong thing wasn't actually going to get you thrown in the stocks. A lot of countries with sumptuary laws put them in place because people were wearing whatever they wanted, and government officials wanted to preserve the social order — but even after the laws were enacted, most people just continued to wear whatever they wanted, and law enforcement didn't actually bother to act as the actual, literal Fashion Police.

Here are eight of the strangest fashion laws in history. Thank heaven E! doesn't have to deal with these sorts of things on the red carpet.

1. Only Elizabethan Dukes And Marquises Could Wear Leopard Furs

Nowadays, we tend to regard all fur as the same general thing (and a fairly politically incorrect thing at that). Mink, cheetah, leopard — whatever, right? Well, that was definitely not the case for the Elizabethans. When Queen Bess the First was in power in England, there were correct furs and incorrect furs for every person, and woe betide you if you wore one that was fancier than your station. Case in point? The fanciest furs in the kingdom: ermine, which was reserved for royalty only, as were the furs of genets, lucernes and leopards.

If you wouldn't know a genet or a lucerne if you fell over one in the dark, that's because they are old-fashioned names for civet and lynx furs, respectively. But leopards were seen as impeccably high-end — and the laws made it quite clear that people weren't allowed to get into them unless they were of the correct rank.

Think good old liberty-and-equality-for-all America was immune to this nonsense? Not by half. The Puritans had brought some pretty restrictive dress codes along with them from Europe. They mostly had to do with modesty: skirts on women had to be floor-length, for example, though the modern belief that they only wore black is misleading (they often wore red, yellows and greens). But the real focus of early dress codes in America was accessories — and what poor people were allowed to get away with.

For example: A 1651 law passed in Massachusetts prevented anybody whose income fell below a certain level from wearing gold or silver lace, scarves, silk, or basically anything fun. The most upsetting thing, though, is that they were also disallowed from wearing "bone lace", another name for bobbin or homemade lace of the period. Now that's just mean.

Sumptuary laws are often a major fashion resource for historians, because they demonstrate what fashion technologies were in common use during the era — and what fabrics and other items the countries in question were trading at the time. The 1574 sumptuary laws in England, for instance, discuss the regulation of fur that "groweth not in the Queen's dominion," meaning that it was imported.

But one thing that got Elizabethan fashion lawmakers all hot and bothered was buttons. Buttons had become popular in the 13th century, but they were made of a lot of different materials, from shell to bone, and the Elizabethans did not like it. To whit, you were only allowed to wear enameled buttons if you were a high-ranking noble or dealt with the Queen directly (presumably because she liked looking at them). But Her Majesty was nicer about silk buttons — she said basically anybody could wear those. Because silk buttons = peasant stuff, clearly.

To get this one, you need to understand the feelings the Romans held towards the people who actually introduced silk to their world – the Chinese, whom Romans referred to as the "Orientals." The Romans were, to put it lightly, not very sure about the Chinese. At all. And they thought silk itself — the beautiful fabric imported along the famous Silk Road trading route from Asia — to be a powerful corrupting influence.

The Roman historian Tacitus, in his Annals, actually records the debate in the Roman Senate where a sumptuary law was passed about silk — but it only applied to dudes. A senator proclaimed that silk shouldn't "degrade the male sex," and they were henceforth banned from wearing it. Why? They felt that it was foreign, and weird, and potentially very feminine, and they were all a bit uncomfortable with it.

5. Medieval Yeomen's Wives Could Only Wear Cat Or Rabbit Fur

English yeomen and their families were in for a bit of a surprise in 1363, when some of the most detailed laws about dress in English history were published. Yeomen occupied a special place in British society at the time — they weren't noble, but they weren't poor either. But the law seemed very intent on putting them in their place. And that meant that they were going to have to wear their pets.

If the wife of a yeoman wanted to wear fur to keep herself wrapped up against the chill of an English winter, she now only had four options: lamb, rabbit, fox, or cat. They weren't even allowed to wear weasel; that was restricted to fancier people. Imagine being told you're too insignificant to wear a weasel.

6. Women In Renaissance Sienna Had To Weigh Their Headpieces

If anybody really laid the concern about women and their dress on a bit too thick, it was medieval and Renaissance Italy. And their fashion-related laws there were often completely focused on women, thanks to some serious misogyny and a religion-based view that women were sinners who needed to have their more extravagant impulses curbed.

Italy was divided up into city-states, and they all had different laws (which must have made traveling seriously confusing). But women living in Renaissance Sienna had a particularly hilarious (or sad, depending on how you look at it) difficulty: they were only allowed to wear plain circlets made of silver on their heads, and the offending articles had to weigh less than two ounces. (Frankly, more than two ounces on your head sounds like a massive headache to me, anyway.)

Some of the strictest laws around women's dress in history involve making prostitutes stand out as different. Depending on where you lived, a prostitute had to wear yellow, black or white, mark herself out with tassels on her arm, or, if she lived in England, wear a distinctive striped hood. The yellow thing was a common marker for a societal outsider: it was also associated with medieval Jews living in European cities.

But it wasn't all bad. In the Encyclopedia Of Prostitution and Sex Work, Debbie Clare Olson points out that prostitutes were pretty much the only people who got to dress "above their station": ladies of the night were actively encouraged to flout sumptuary laws and pretend to be extravagant noblewomen, complete with jewelry and embroidery everywhere. It marked them out as alien, rather than part of "normal" regulated society.

8. Cleavage Was Measured With Fingers

Measuring the amount of "appropriate" cleavage on a woman with fingers was common in countries where the Catholic Church created regulations on women's dress. And, hilariously, the act of measuring sounds far racier than anything else about the entire procedure. Appropriate necklines, apparently, were measured by the width of "fingers below the collarbone" — where somebody (not named) would place their fingers across the décolletage and mark the law as the point beneath them. The owner of the fingers presumably had a very fun job.

Funnily enough, the Elizabethans, despite controlling basically everything about ladies' dress, didn't care at all about cleavage; on one memorable occasion, Elizabeth I basically bared her breasts to the French ambassador. I don't think Liz II would be getting up to that sort of shenanigans.

More like this
25 Inspiring Quotes From Black Women To Celebrate Black History Month
By Kyli Rodriguez-Cayro and JR Thorpe
24 History-Making Black Women You Probably Didn't Learn About In School
By Ayana Lage and JR Thorpe
Looking Back At Kylie Jenner's Best Fashion Week Looks
By Allie Fasanella
19 Instagram Captions For Celebrating Black History Month
By Ayana Lage
Get Even More From Bustle — Sign Up For The Newsletter
From hair trends to relationship advice, our daily newsletter has everything you need to sound like a person who’s on TikTok, even if you aren’t.