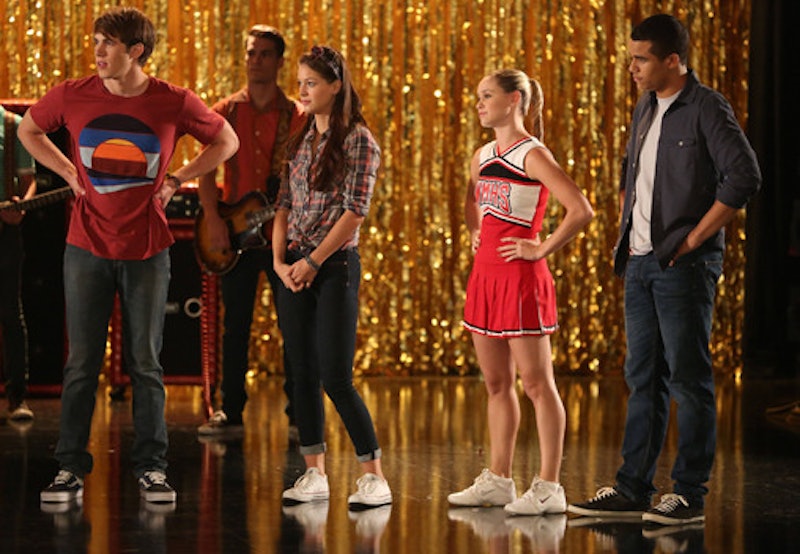 It's the kind of news that's only kind of news. More storylines have been focused on the new regular actors, and we've only seen Mckinley High alums like Mike and Mercedes a few times this past season. It's even less news because the new regulars are just filling the shoes of the old regulars. After all, series creator Ryan Murphy only knows how to write five types of characters when it comes to Glee.

The sun of the Glee universe, The Rachel is always on top. She's smart, she's the best singer and the best actress, and she's part of the most important love triangle (although with this new cast, it's more like a square). But despite being so perfect, she's a loser at Mckinley High, and always gets pushed around by The Quinn (see below).

The new Rachel is pretty clearly Marley, whose character is much of an indicator of the direction the show has taken in recent seasons. The original flavor Rachel had a laundry list of flaws and quirks — she was bossy, she was annoying, she had an obsessive work ethic. But it was these flaws that separated Glee from your run-of-the-mill teen drama and made Rachel's talent seem authentic and genuine. Marley, however, represents the more generic teen drama turn that Glee has taken recently. Her only flaw is that she's poor (which is a circumstance, not a characteristic), and her talent comes off as one of these textbook "discovered" talents that people seem to just stumble into only in television shows. Maybe promoting Marley to official regular status will force the Glee writers to develop her character a little more.

The football-playing, good-intentions-having, popular guy in glee club. Sure, he's a little dumb and he can't dance very well, but he's a leader with a good heart. He's got a thing for The Rachel, but it's complicated.

Ryder has taken on this role pretty well, although it wasn't a terribly interesting one to begin with. And he's had some interesting storylines that have given him a little bit of backstory, like his dyslexia and the whole "catfishing" debacle. But so far, Ryder has just come off as only sensitive, so being a series regular might impart some Finn-like leadership on him.

Mischievous, apathetic, and bold, The Puck is pretty popular... especially with the ladies. He's the type of character who schemes up a lot of bad things, but he's not a bad person. The obvious inheritor of The Puck role would be his half-brother, Jake. But Jake's attempts to be the "good guy" that Puck never was make the character come off as a bit bland. The Puck is an interesting character because we come around to liking him eventually, but Jake's nice guy take on the role just makes him into another generic Popular Teen Hearthrob. What's the point of The Puck if he's got no edge?

Bossy, bitchy, and blonde. The Quinn is your typical high school mean girl queen: She's the head cheerleader, she dates the popular guys, and she's got biting insults to defend her crown. Next to Santana, The Quinn has the best one-liners — that's what makes her such a fun character. But under all those insults, she's very vulnerable, although she never shows it.

Kitty comes off as Quinn 2.0: tinier, blonder, meaner. But so far, her motivations have been unclear. What was so great about Quinn was being able to understand why she was so cruel. She defended the things she felt she deserved because she thought she would be nothing without her status symbols. The new Quinn has been hot and cold without much explanation. She unpredictable in her mean girl ways, but there's never any rhyme or reason to it. Hopefully next season we'll finally see the method to her madness.

The Mercedes can only be summed up in one word: DIVA. She's queen of the vocal runs and belts with lungs of iron. She's as fierce as she is fiercely loyal. She knows what she deserves in the glee club, and she'll fight tooth and nail to get it.

The new Mercedes, Unique, embodies all this and more. And as Glee's only transgender character, she presents the opportunity to depict conflicts and issues that are completely new to television. But the show has had a lot of problems with portraying a transgender character. Many of the other characters on the show joke about Unique's gender insensitively and use transgender slurs like "tranny." If Glee wants to maintain its the supposedly diverse and inclusive status it promotes, it needs to be more sensitive in writing Unique's character.