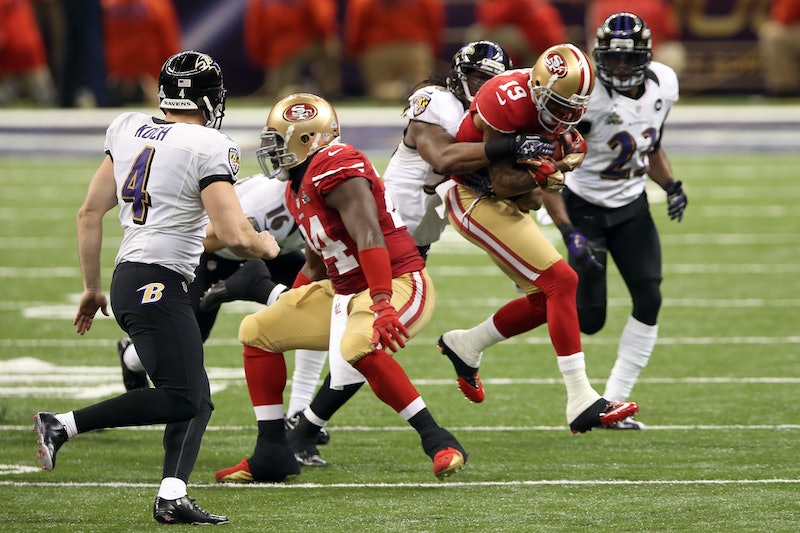 On Feb. 2 in East Rutherford, New Jersey, the NFL will host its 48th annual Super Bowl event. Being that this is the NFL we're talking about, of course there's a catch: cops in NJ are already preparing for a possible influx in sex trafficking at the Super Bowl. Yes, apparently America's biggest sporting event also plays host to the single biggest sex-trafficking event across the United States.

"The Super Bowl is the greatest show on Earth, but it also has an ugly underbelly," Texas' Attorney General, Grey Abbott, told reporters in 2011 when his state hosted the championship. Other host states, like Florida in 2009, have claimed that the Super Bowl brought with it an influx of sex trafficking. By some estimates, 100,000 prostitutes were brought to Miami for the Super Bowl in 2010.

Sex trafficking is thought to be surprisingly common at sporting events: the huge, predominantly male crowds not only increase demand, as FBI sting ops discovered, but cover up the incidents; pimps and prostitutes essentially vanish in the midst of all those people. But because sex trafficking is a crime that largely goes unreported and unpunished — the average child victim has less than a 1 in 100 chance of being rescued — nobody can be sure if incidents do grossly increase at the NFL championship.

And because there's little concrete evidence that the Super Bowl increases sex trafficking, some believe the problem little more than an urban legend. Last year, when the Super Bowl was held in Indianapolis, the Phoenix New Times reported: "Yes, one of America's great urban legends is again being trotted out just in time for kick-off: the notion that legions of out-of-town prostitutes descend on whichever city hosts America's big game."

But there are few firm statistics about sex trafficking at all. The FBI believes that about 300,000 children are being trafficked inside America at any given time, but that's little more than an educated guess, and some critics believe that's a huge underestimation.

Urban legend or not, it's clear to see where the logic about the event's threat comes from: the Super Bowl on Feb. 2 will host 400,000 people from across the country, mostly men. With that many people, goes the popular wisdom, demand for sex traffic increases — and pimps will make sure they've available to service them.

Whether myth or fact, New Jersey authorities are making sure they're prepared for the possibility of a spike in sex traffic. New Jersey's Attorney General, John J. Hoffman says that the state has "enlisted, basically, every service provider that people coming to the Super Bowl are going to run into... There are a lot of eyes that are going to be on their activities and going to be on spotting potential victims of this crime."

Some agencies have other ideas. A representative for Operation Freedom Taskforce, a nonprofit that aims to combat the sex trade, told ABC: "Prayer is such a powerful way to combat trafficking. It accomplishes more than one might think."

This much is certain: Sex trafficking is a major issue within the United States. Contrary to popular belief, it's not a predominately foreign-born issue — every victim in America is 10 times more likely to have been born inside the States than outside it. Pimps don't typically hold their victims with force, but with manipulation, and the average victim is between 12 and 14 — too young to be aware that they have options. And trafficking is the second-biggest industry in the world, eclipsed only by the drug industry.

Plus, trafficking often occurs within "normal" venues: truck stops, sporting events, in the classified section of newspapers. The crowds that storm the Super Bowl location could make it that much easier to not get caught. And according to Cindy McCain, the NFL isn't exactly looking to help curb the problem.