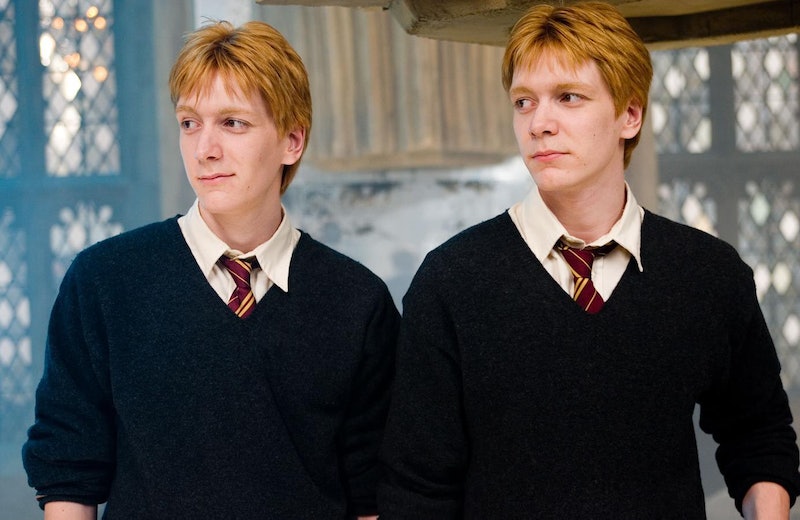 I grew up reading the Harry Potter series, and I distinctly remember being happy any time Fred and George crossed the page. Their joke about sending Ginny a Hogwarts toilet seat made me literally cry with laughter when I first read Sorcerer’s Stone (granted, I was 7 or 8 years old, and the thought of that was probably the funniest thing I’d ever heard). But the twins were so much more than just comic relief, though their pranks and jokes were always a welcome break from some of the darker moments in the series. Though Hermione will always hold a special place in my heart (as a young know-it-all I was convinced that I was her), when my family jokes that we’re the Weasleys, I always claim the role of Fred and George (no matter if my family agrees with that characterization or not).

First of all, I won’t mention anything SAD about these two, because this is only a space to talk about the good times. That’s really what Fred and George were all about — they knew what was important, but they also knew how to laugh, even on the darkest days. When it comes to the Weasley twins, I think they’re two of the best HP characters of all time. Here’s why.

Even though Fred and George spend a lot of time playing pranks, we know they actually get good grades in spite of everything — Ron confirms this in Book one — and they'd have to be extremely intelligent to start their own business and invent everything in Weasley's Wizard Wheezes.

The twins originally stole the Marauder's Map from Filch's office, and soon discovered it was more than an ordinary map. But instead of keeping this awesome treasure for themselves forever, they gave it away to Harry. Sure, they had memorized a lot of the passages, but the Marauder's Map had a ton of cool features (for example, you can use it to spy on people), and the twins gave this up because they wanted to help out a friend.

They Relied On Talent, Not Material Items

Fred and George are great beaters on the Quidditch team, even though they ride Cleansweep Fives (not exactly the fanciest brooms). They rely on their own talent and ingenuity to succeed, in both Quidditch, and in life. They also recognize that magic isn't the only way to find success: for example, they learn several "Muggle" tricks, such as lock-picking, to help them out in life.

Sure, Fred and George tease their family members quite a bit, but at the core of that teasing is the sentiment that they really care. When they tease Ginny, it's to try and cheer her up. When they tease Percy, it's often to get him to spend more time with them (such as when they tell him that Christmas is a time to be with family, and force him to wear a Weasley sweater). At the heart of all those jokes is... their heart.

Fred and George never doubt Harry for a second, and even joke about people who would, for example, think he was the heir of Slytherin. They helped rescue him from the Dursleys by stealing the flying car, and in general used their mischief to help more than to hurt.

They Threw Snowballs At Voldemort's Face

Remember when the twins enchanted snowballs to bounce off of Quirrell's turban? Yeah, they were throwing snowballs at Voldemort's face.

They're Bold With Their Feelings

The twins don't shy away from going after what they want. Fred easily asks Angelina to the Yule ball, and again and again the twins pursue their dreams without care of how it makes them look to others. They don't make decisions based on what others think about them — instead, they focus their energy on boldly pursuing their goals.

They Have Cool Jobs

Owning a wizarding joke shop? That's such a cool job. Plus, Fred and George don't forget who gave them the loan to get them there... they let Harry take anything he wants from the shop for free, because they're upstanding businessmen.

They Use Their Humor For Good

Fred and George don't just tell jokes for the sake of telling jokes. Often, their humor — like great comedy — has a purpose. Whether they're simply cheering someone up, or hosting a humorous radio show that actually informs people of what's going on during a war, they use comedy as a tool for communicating and educating.

The Weasley twins exit Hogwarts in what's got to be one of the most iconic scenes ever: they set off a ton of fireworks, and fly away on brooms, leaving a host of pranks for Umbridge to clean up. Glorious.